We all love casino movies, probably for the simple reason that going to the casino is one of the ultimate pleasures of life. Everyone dreams of winning big and getting to live a life of luxury for the rest of their days; but only a precious few get to live their dream. Many Hollywood stars have made their name, fame and money by starring in casino movies. Here are 10 stars who have appeared in casino movies at least once. 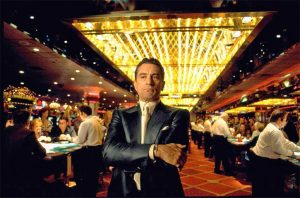 One of the all-time greatest actors of Hollywood, Robert De Niro has appeared in no less than two blockbuster casino movies that include Casino (1995) and Las Vegas (2013).

Casino: Considered by many to be the best casino movie of all time, Casino is director Martin Scorsese’s masterpiece about money, power, greed, deception and murder that occur between two best friends: one a casino operator (played by De Niro) and the other a mafia hit man (played by Joe Pesci).

Las Vegas: This entertaining film is about four aging childhood friends who go to Las Vegas to celebrate the end of one of the friends’ longtime bachelorhood and find that the intervening decades have changed Sin City and tested their friendship. 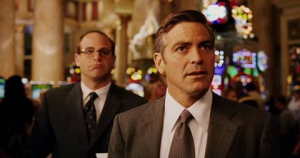 One of the most handsome men to grace the silver screen and a great actor as well, George Clooney has appeared in three blockbuster casino movies: Ocean’s Eleven (2001), Ocean’s Twelve (2004), and Ocean’s Thirteen (2004).

Ocean’s Eleven: Considered one of the best casino movies of all time, Ocean’s Eleven is about a group of criminals, led by Clooney’s character Danny Ocean, who plan to rob three Las Vegas casinos simultaneously. The film was a huge box office hit and made Clooney a major Hollywood powerhouse.

Ocean’s Twelve: In this much anticipated first sequel to Ocean’s Eleven, Danny Ocean (played by Clooney once again) recruits one more accomplice to pull off three simultaneous casino heists in Europe.

Ocean’s Thirteen: In the second sequel to Ocean’s Eleven, George Clooney reprises his role as Danny Ocean, who rounds up his accomplices for a third casino heist after a casino owner double-crosses one of the original eleven. 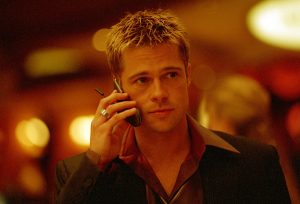 Arguably the biggest movie star of our time, Brad Pitt has appeared in three of the biggest casino movies of this century: Ocean’s Eleven (2001), Ocean’s Twelve (2004), Ocean’s Thirteen (2004) and Killing Them Softly (2013).

Ocean’s trilogy: In all three movies of the Ocean’s trilogy, Pitt plays Danny Ocean’s right-hand man Rusty Ryan, who takes care of the logistical side of the heist. Often shown eating some kind of fast food, he is a skilled planner. But his ex-girlfriend gets the team in trouble in Ocean’s Twelve.

Killing Them Softly: In this 2012 casino movie, Pitt plays a mob enforcer called Jackie Cogan who is tasked with finding and eliminating three not-so-bright crooks who rob a card game protected by the Mob, causing the collapse of the local criminal economy. 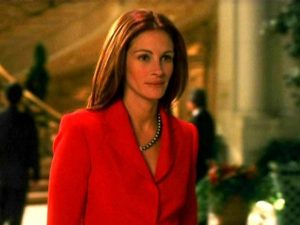 The exceptionally talented Julia Roberts, once known as “America’s sweetheart” and the highest paid actress of her time, has appeared in Ocean’s Eleven and Ocean’s Twelve. However, she missed out on the third installment.

In both movies, Roberts plays Danny Ocean’s ex-wife Tess Ocean, who is the curator of the Bellagio Art Gallery. She unknowingly plays a part in the heist in Eleven and reunites with Danny at the end of the movie after realizing that he still loves her. She is the 12th member of the team in Twelve. 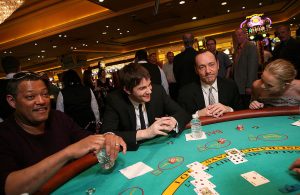 The now-disgraced actor Kevin Spacey, who was once considered one of Hollywood’s best actors, has appeared in two of the best casino movies: 21 (2008) and Casino Jack (2010).

21: One of the best casino movies, 21 is an exciting film based on an actual story about 6 MIT students who were trained by their mentor, an unorthodox professor called Mickey Rosa, to become experts in card counting, winning millions of dollars in Las Vegas casinos. Rosa is played to perfection by Kevin Spacey in one of his most memorable roles.

Casino Jack: In this movie about the dangers of money, power and privilege, hotshot Washington DC lawyer Jack Abramoff (played by Kevin Spacey) and this business partner Michael Scanlon (played by Barry Pepper) find themselves neck deep in trouble as their scheme to amass millions of dollars by peddling influence leads to corruption and murder. 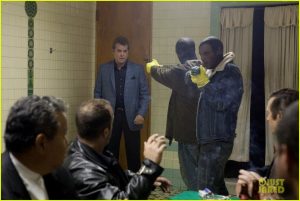 Ray Liotta was once almost synonymous with the on-the-edge tough guy after portraying a real-life criminal called Henry Hill in the crime drama Goodfellas. Also, he has appeared in three casino movies that include Phoenix (1998), Revolver (2005) and Killing Them Softly (2013).

Phoenix: In this 1998 crime drama, Liotta plays a superstitious cop Harry Collins who racks up a large amount of gambling debts and is given the option to kill an informant to pay it off or suffer the consequences. Collins instead decides to rob a loan shark so that he can pay off the debt and also run off with a beautiful bartender named Leila.

Revolver: In this exciting crime thriller, Liotta plays crime boss Dorothy Macha who puts out an order on a hotshot gambler called Jake Green (played by Jason Statham) after the latter humiliates him in a private casino game. While Macha’s killers are looking for Green, Green plots his own plan to kill Macha with the help of two friends.

Killing Them Softly: Liotta plays a mob lackey named Markie, who becomes the victim of a robbery carried out by the not-so-bright thugs hired by a rival crook, causing the local criminal economy to collapse. Brad Pitt plays mob enforcer Jackie Cogan hired to eliminate those responsible. 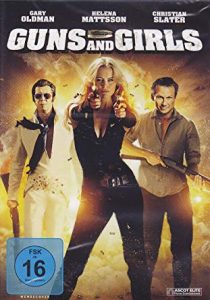 Christian Slater, who made his mark by playing cool but troubled kids in movies like Heathers, Young Guns II and Untamed Hearts in the late 80s and early 90s, has appeared in two casino movies: Very Bad Things (1998) and Guns, Girls and Gambling (2012).

Very Bad Things: In this 1998 black comedy, Slater plays an unstable young man named Boyd, who is one of four friends who head to Vegas for a bachelor party. When one of them accidentally kills a hired stripper, Boyd kills the security guard to prevent him from calling the cops and then goes after his friends to save himself.

Guns, Girls and Gambling: In this comedy thriller, Slater plays a down-on-his-luck dude who heads to an Indian Reservation casino after losing his girlfriend to a doctor. He finds that his troubles are not over when a hooker steals his money and then someone steals an Apache war mask from the casino, making him the prime suspect. To make a dangerous situation worse, a host of criminals descends on the casino to claim the treasure for themselves. 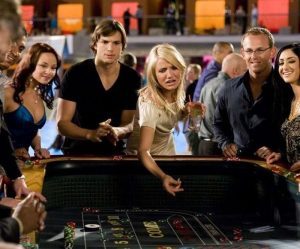 One of the most successful Hollywood actresses of her generation is Cameron Diaz, the tall, blue-eyed and strikingly beautiful blonde who has appeared in three casino movies, namely Very Bad Things (1998), Lucky You (2007) and What Happens in Vegas (2008).

Very Bad Things: Cameron Diaz plays the fiancée of Kyle Fisher, one of four friends who heads to Las Vegas for a bachelor party and accidentally kills a hired stripper. Christian Slater plays a troubled man named Boyd who makes the situation worse by killing the security guard who is the only witness.

Lucky You: Diaz plays an aspiring singer named Billie Offer, who gets involved in a complicated relationship with a hotshot poker player named Huck Cheever (played by Eric Bana). As Huck tries to win a slot in the world championship, he must compete against his poker legend father who had abandoned his mother years ago and at the same time balance his love affair with Billie.

What Happens in Vegas: In this 2008 comedy, Diaz plays career woman Joy McNally married to a playboy named Jack Fuller (played by Ashton Kutcher). During a vacation in Las Vegas, they both realize that their marriage was a mistake but must try to make it work after the judge refuses to grant an annulment. At stake is a huge jackpot.