2018 brought a number of great films we won’t soon forget. Many of these movies were animated, but they weren’t all just for kids. Disney/Pixar is often the leader in animated films, but 2018 didn’t bring about many new storylines from this famed partnership. Instead, Disney/Pixar focused on creating sequels to many of their animated blockbusters. However, other animated companies have made their mark in the film world for 2018 as well. Since it’s still the beginning of the year, you’ve got time to catch up on the movies that made 2018 a great year for entertainment. Here are some of the best animated films of 2018.

Disney doesn’t create theatrical sequels for its animated movies. However, this doesn’t include Pixar. When Disney does decide to make a “part two” of a popular movie, it’s usually because the movie and characters are fan favorites. Ralph Breaks the Internet is the sequel to Wreck-It Ralph, and focuses on the characters Ralph and Vanellope, voiced by John C. Reilly and Sarah Silverman, respectively. The two characters travel to the internet when an important part of the Sugar Rush arcade machine breaks. Vanellope and Ralph have to go “online” to purchase a part from eBay. Other famous parts of the internet are also included in the movie, including Twitter and Amazon. The film is one for the whole family, since some references are sure to go over the heads of young children.

While the movie was pretty popular in 2018, it’s not in the top three. Many viewers felt that Ralph Breaks the Internet was more like a direct-to-video sequel, similar to the Disney sequel films that were popular in the 1990s. The movie also doesn’t have much conflict, since there’s no villain in the film. Product placement is also a little too abundant for some viewers. Overall, the movie was cute and charming, but most animated movie fans would agree that it wasn’t exactly necessary.

Liz and the Bluebird

Liz and the Bluebird was released by Kyoto Animation. The company has released quality anime films for the last 10 years or so. Kyoto Animation is also responsible for other great animated films like Kanon, K-On! and The Melancholy of Haruhi Suzumiya. Sound! Euphonium was also produced by Kyoto. Sound! Euphonium is a show based on a Japanese novel series about a high school music club that is improving significantly due to its new teacher. Liz and the Bluebird is the spinoff of the Sound! Euphonium series and focuses on two of the band students. The students are nearing graduation and are facing a number of challenges with the band.

Liz and the Bluebird is visually stunning and is similar to A Silent Voice, another Kyoto Animation movie. Liz and the Bluebird is also a vast improvement from the Sound! Euphonium movie, since the film had a significantly larger budget. The movie features to protagonists, Nozomi Kasaki and Mizore Yoroizuka, who are involved in a situation that involves unrequited love. The two characters are exploring and working through the feelings they have for each other. They are also working on a musical piece together, and the song tells a story that is deeply personal and relatable for both of them. The song is based on “Liz and the Bluebird,” a fairytale. Even if you don’t know much about source anime, the movie stands out and tells the interesting story of two teens who are entering womanhood.

This film from Wes Anderson, the producer of Fantastic Mr. Fox, is one of the best of 2018. Some say Isle of Dogs is one of Anderson’s best works. The storyline for the film is original. Anderson developed the premise about future dystopian Japan. In the movie, there’s an ancient family that has long held the cat in high esteem. The cat is thought to be the “animal of the people.” The family comes up with a plan to eliminate all dogs, and they release a poison that makes dogs sick. The dogs are then exiled to an island for the rest of their lives. The family’s plan seems to be going “well” until a young boy decides he wants to save the dogs.

Like many of Wes Anderson’s recent works, Isle of Dogs features an impressive celebrity voice cast. Actors including Edward Norton, Bill Murray, Greta Gerwig, Tilda Swinton, Frances McDormand, and Bryan Cranston lend their voices to the project. However, Isle of Dogs was met with some controversy. Critics had a lot to say about some of Anderson’s choices and didn’t like the way Japanese people were depicted. However, the film did inspire an experimental soundtrack from Alexandre Desplat is one of the movie’s highlights. The music also further exhibits Anderson’s style. 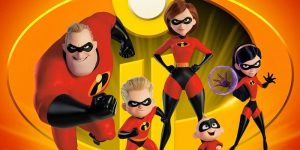 The first Incredibles movie was released 14 years ago. Fans of the first film had been waiting for years to see what happened to the characters in the movie. Brad bird, the film’s director, had to find a way to justify making the sequel, since it had been so long since the original film. It was also a challenge to generate significant excitement about the movie, since animated movies are becoming more and more common. Incredibles 2 was met with a similar level of anticipation as Finding Dory, the sequel to the popular Disney Pixar film Finding Nemo.

The lovable family of superheroes tries to live normal lives after being banned. While the superheroes are saving lives and getting people out of danger, they have a tendency to cause more chaos, which was the reason for their original ban. The Incredibles are known for destroying buildings in the city. This is one of the reasons new superheroes like Elastigirl are given jobs at DevTech. It’s up to Elastigirl and the rest of the new heroes to restore the public’s faith and trust. This will allow the Incredibles to get back to the work they love – fighting crime and keeping citizens safe. The movie also touches on social and family issues, since Mrs. Incredible is called to be a superhero again while Mr. Incredible becomes a stay-at-home dad taking care of three kids. This made the movie more relatable for adults as well and focused more on relationships over-the-top superhero special effects.

Spider-Man: Into the Spider-Verse

It could be argued that another Spiderman movie wasn’t necessary. This is especially true after the wealth of animated movies released in 2018, including Incredibles 2 and Teen Titans Go! Into the Spider-Verse was the third animated film to feature superheroes during 2018. However, some fans say they are glad that Into the Spider-Verse was the best. Miles Morales is the main character of the movie. He’s a teenager who is getting used to going to a new private school, and is the son of a nurse and police officer. Miles’ parents have high hopes for him, and he often finds relief by spending time with his uncle. During his time with his uncle, who is a superhero villain, Miles is bitten by a radioactive spider. This gives him Spider-Man abilities.

Miles Morales’ story brings the elements of the Spider-Verse together. There are also other characters that make the story more interesting. Old Peter Parker is in the movie, as well as Spider-Gwen, Spider-Noir and even Spider-Ham. The movie has lots of humorous moments that kids and adults will enjoy. It’s one of the best movies in the Spider-Man series. It shows that anyone can take on the title.