Some industries are more static than others. For example, the retail shopping industry is constantly innovating, going from brick-and-mortar stores to online shopping to quick and easy-to-use apps.

The restaurant industry, on the other hand, relies on a tried-and-true experience that patrons have been enjoying for generations. Companies can fall anywhere along this spectrum, and there are certainly pros and cons to every degree of innovation or lack thereof. But, undoubtedly, the gambling industry swings to the side of being more technologically advanced, especially with the dawn of online gaming.

If we tried to recount all the ways technology has affected the gambling industry, this article would go on for volumes. Instead, we’ll focus on one of the more recent newcomers: bitcoin gambling.

Bitcoin has become such an incredibly fast-growing phenomenon that it’s difficult to believe it was created just 10 years ago.

Bitcoin is an independent, borderless form of currency that is also anonymous and untraceable. It is called cryptocurrency. While electronic currencies that weren’t established and regulated by specific countries have been tried before, the ease of use and the level of security that bitcoin provides have allowed it to surge in popularity. While it’s left its mark on a wide variety of industries, there are few, if any, that it’s affected as much as gambling.

Advantages of using bitcoin in the gambling industry

Bitcoin is an incredibly beneficial resource for the world of gaming, both online and in person. It has advantages for both the gamblers and the casinos:

• Anonymity – Your bitcoin account is an independent entity that isn’t tied to your personal information in any way. It’s essentially the electronic version of cash, except better because it’s been gaining value at a rocket’s pace. This allows users to enjoy an unparalleled level of privacy with the convenience and safety of electronic currency as opposed to cash.

• Transaction fees – Unlike government-regulated currencies, bitcoin carries little or no transaction fees at all, for both the casino and the patron. Eliminating these extra fees, which can be quite extensive, especially in countries that place high regulation on casinos, puts more money in both the gambler and the house’s pockets, allowing for bigger incentives and jackpots.

• Security – Traditional currencies and the banks that trade in them are on a constant quest to squash electronic theft, and judging by the fact we appear to have one major data breach after another, they haven’t yet mastered it. Bitcoin, however, has much stronger security regulations in place. It uses a system of private and public keys that aren’t stored like credit card information is, so it’s much more secure against intercepting hackers.

• No chargebacks – A common concern of casinos, and anyone who is on the receiving end of funds, is the dreaded chargeback. When a person reports a transaction as fraud, the credit card company does a chargeback to reverse it. This is great when you’re the victim, but some people take advantage and intentionally complete transactions they later report as fraudulent. This is theft, and it leaves the casino/receiver on the hook. Bitcoin transactions, on the other hand, are not reversible, so there’s no risk of unscrupulous chargebacks for bitcoin gambling sites.

• Deposit times – Because the gambling industry is so strictly regulated in some countries, transactions with online casinos can take an extremely long time to complete – as long as two weeks in some cases. Bitcoin, on the other hand, doesn’t need to jump through these regulatory hoops, so deposits and withdrawals can be completed almost instantaneously. For gamblers and casinos, this allows for a simpler, more convenient, and more seamless experience.

• Escape from a bank – Banks can claim to be a completely safe transaction center and storage method for your money. The reality is, however, there’s only so much they can promise. Ask one of many people who saw his or her bank collapse or take advantage of him or her during the recession of 2008, and he or she will be more than eager to stop relying on banks — or other third-parties — to such a great extent. Bitcoin, on the other hand, is not a centralized system, so there’s no bank that could rip you off or let you down.

Clearly, bitcoin can offer benefits to both the gambler and the casino in the gaming industry, but there are still challenges to overcome as well:

• Bitcoin can sometimes run into issues in highly regulated governments, such as certain areas of the United States. For bitcoin to fully be able to thrive, some analysts believe that it should develop a better, more cooperative relationship with these areas.

• The value of bitcoin has absolutely skyrocketed in the past several years, and while this is fantastic for holders of the currency, it’s left some people asking, “What if it starts to go the other way?” This is perhaps the largest hurdle to bitcoin being more prevalent overall – it’s a bit of a gamble in and of itself. Don’t get too distressed, though, because bitcoin’s steady rise shows no sign of taking a downward turn anytime soon. 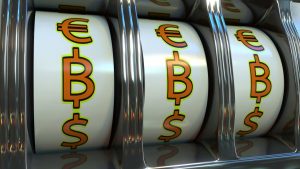 Ways bitcoin can affect the future of the gambling industry

The few hurdles to bitcoin’s success pale in comparison to the many ways it holds potential for the future:

• Bitcoin makes the gaming industry more attractive because it allows users to complete their transactions more quickly, more conveniently, and with more security and anonymity.

• The more that bitcoin’s popularity increases, the more it will benefit the industries that embrace it. It’s reported that as many as 50 percent of bitcoin transactions are in the gambling industry today, and the unique cryptocurrency has been accepted at many brick-and-mortar casinos since 2015. As more and more users flock to bitcoin, they’ll actively seek out industries that accept it.

• Bitcoin makes it easier for new online casinos to enter the industry. Because gambling is so tightly regulated throughout the world, most countries require casinos to have a license to operate there and accept their currency. Bitcoin, on the other hand, requires no such license, so it offers a much lower barrier to entry.

• Bitcoin widens the audience for online casinos. Foreign transaction fees can be nothing short of a nightmare and a massive drain on your finances. Bitcoin avoids all this hassle and allows online casinos to do business with people from any country.

All in all, the gambling industry has never been one to shy away from new technology, and bitcoin is no exception.

As the cryptocurrency continues to gain popularity and usage, casinos will do well to embrace the changing times and invest in the power of bitcoin. Given all the benefits above for the user, the bitcoin casino, and the industry, it’s safe to say that bitcoin has a bright future in the gaming industry.