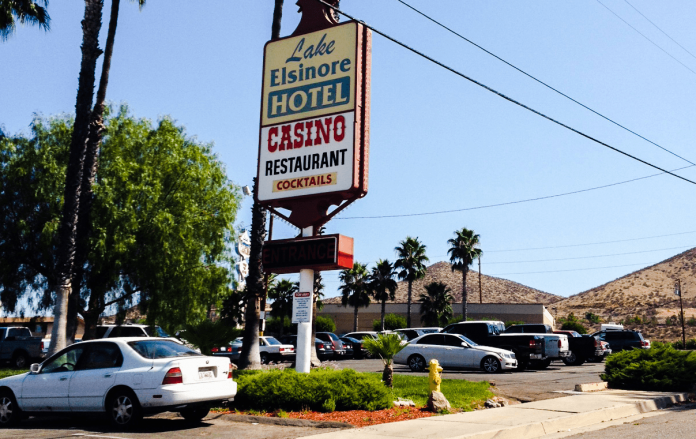 California gaming regulators are investigating the Lake Elsinore Hotel and Casino for numerous violations of the Gaming Registration Act. The casino has been operating with only a provisional license since 1999, and its owners are linked to a fundamentalist Utah sect operating in the shadows.

The Sahara Dunes Casino, doing business as Lake Elsinore Hotel and Casino, is located on a stretch of Interstate 15 between Los Angeles and San Diego. The unassuming casino property is far from the glitzy Las Vegas Strip, and so are its owners.

The secretive Mormon sect known as the Kingston Clan of Utah owns and operates Lake Elsinore, and the group is now under investigation for numerous licensing violations. The California Bureau of Gambling Control (CBGC) alleges that the Kingstons have avoided state disclosure regulations and background checks, and have operated with only a provisional license since 1999.

According to the official court document from the CBGC, the Kingstons have “failed to submit the required, completed 16 applications, had failed to timely comply, in whole or in part, with the Bureau’s requests for information, and had committed numerous violations of the (Gaming Registration) Act and the regulations promulgated thereunder in the operation and management of the casino.”

In addition, the Bureau stated that the casino did not keep adequate records, failed to notify regulators of changes in ownership, and allowed “continued employment of a key employee with a felony conviction.”

The Kingstons are a family-run business empire based in Utah worth hundreds of millions. Also known as The Order, the Kingston Group, and the Davis County Cooperative Society, the Kingstons have a lot of family secrets they would rather keep quiet.

Joseph and Ted Kingston operate the Kingston Group, which has drawn federal attention for alleged violations of marriage laws and tax evasion. According to the Salt Lake Tribune, members of the group are known to conduct marriages of girls as young as 15, as well as marrying cousins.

The Southern Poverty Law Center calls the group a ‘blood cult,’ citing the group’s years of practicing polygamy, incest, and bigotry, claiming that the Kingstons were from “superior bloodlines” linked to Jesus Christ himself.

The Law Center interviewed various ex-members of the cult, and opened up a Pandora’s Box in the process. Allegations of systemic racism, incest, ritual beatings of young women, and blatant violations of polygamy laws, all came to light during their investigation.

One former cult member, Mary Anne Kingston, sued over 200 family members after being forced into marriage at age 16 to her uncle, David Ortell Kingston. She was one of many wives in the arrangement, and when she tried to escape, she was beaten unconscious with a belt by her own father, John Daniel Kingston.

The history of illegal and immoral practices surrounding the Kingstons explains their reluctance to pass background checks. Their predominantly-Mormon home state of Utah officially rejected polygamy in 1890 in order to attain statehood. However, many fundamentalist Mormon offshoots and sects still practice polygamy outside of the law.

Gaming regulators routinely conduct rigorous background checks on all gaming license applicants. The practice dates back to the early Las Vegas casino era, where mob money financed casinos as a matter of course. Uncovering the truth has always been a long and complicated process, as criminal groups hide under umbrella companies, money laundering, and fake corporate identities. Many also employ silent partners as the ‘face of the business.’

Questions remain as to why the Kingstons have been able to avoid proper background checks and licensing for so many years, but their extensive business community ties and mountains of money could explain it. The group operates numerous financial and agricultural operations in Utah and Idaho, in addition to mining, restaurant supply, and weapons retail.