Artificial intelligence is swiftly changing the way we work and live. And, according to experts, this technology will beat us at almost everything in the near future. In the gaming world, artificial intelligence is taking over and is continuing to beat top poker players. In the past few years, a couple of AI programs have demonstrated just how good they are at poker. The AI programs have beaten some of the best poker players the world has ever seen.

Poker is all about excellent strategy-making talent and the ability to envision the next move of your opponent. Combining these two skills can help you win big and become a celebrated poker player. Some poker players are in a position to combine multiple poker skills naturally, and that is what makes them pros. Such poker players are famous and have mouthwatering bank accounts thanks to their big earnings from various poker tournaments.

The existence of successful poker players proves that our brains have the capability to go beyond our expectations. It also shows that the human brain is in a position to perform at its best. This is especially true when a person is performing a task that requires high-reasoning, such as playing poker. In the last couple of years, however, the poker industry has begun to witness a new and curious trend. And, this trend has prompted humans to question our brains and how they work. 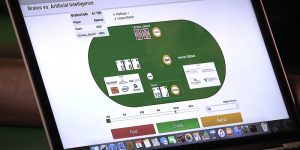 One artificial intelligence program that has outsmarted top poker players is Libratus. A professor and a computer science student from Carnegie Mellon University in Pittsburgh developed this artificial intelligence program. They claim it has the capacity to reason strategically. According to its developers, the success of Libratus in poker has nothing to do with luck. Its success lies in its capability to reason and analyze potential poker outcomes. That makes it better than its human opponents, they said.

Earlier this year, Libratus played against four of the best poker players in the world and credibly beat them. Libratus managed to outsmart four experienced poker players in Texas Hold’em. This type of poker has no upper limit on betting. In Texas Hold’em, players are free to stake their entire stack of chips at any time. The game is notorious for bluffing. This is a characteristic that appears to favor human poker players rather than an artificial intelligence program. But, Libratus managed to emerge victoriously.

After the tournament, reporters interviewed the four professional poker players. They said they had never seen anything like that in their entire careers. According to one of the players, Dong Kim, the poker expertise demonstrated by Libratus was on a new level. He described playing against Libratus as playing against a cheating opponent. The other players said that playing against Libratus felt like the artificial intelligence program could read their cards.

According to the team of developers at Carnegie Mellon University, this AI program makes use of two sophisticated supercomputer techniques. And, that is why it was able to beat its human opponents. At the early stages of the game, Libratus utilized one of its sophisticated supercomputer strategies known as the abstraction technique. It switched to the second strategy during the final stages of the game.

Why is Libratus this powerful? 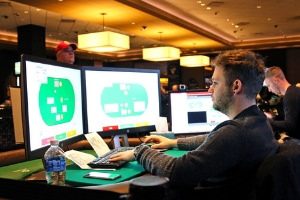 According to the top poker stars beaten by Libratus, the AI knew all the poker rules and could anticipate their moves. For instance, it knew how to bluff and when to divide its stakes into various sizes. Libratus’ accomplishments surprised the poker stars. Additionally, the professional poker stars noticed Libratus could learn their various poker moves and exploit them to win.

Artificial intelligence experts claimed that Libratus relied on multiple systems to beat its human opponents. The main driving force in artificial intelligence programs is neural networks. However, experts claimed that Libratus relied on something more advanced, an algorithm known as counterfactual regret minimization. The program had played multiple poker games against itself. Therefore, it was able to predict outcomes faster and much easier than its human counterparts.

Libratus isn’t the only poker playing artificial intelligence program created by researchers at Carnegie Mellon University. After Libratus, a renowned computer programmer, Tuomas Sandholm, helped develop another poker-playing AI program known as Claudico. Claudico was not as effective in poker as Libratus. But, it gave professional poker stars a hard time during a 2015 Texas Hold’em poker game at the Rivers Casino.

Four renowned poker stars played against Claudico in a 13-day poker tournament. Although the human poker stars were victorious, they had to join forces in order to defeat the artificial intelligence program. According to onlookers, Claudico demonstrated high intelligence levels and had a perfect mastery of the game. Onlookers added if each poker pro played against Claudico on his own without assistance, Claudico would have defeated each man.

DeepStack relies on artificial neural networks to beat its human opponents. Its developers are a team of experts from the University of Alberta. They trained DeepStack in a special way that allows it to develop poker instinct. During a poker game, the program uses of its poker intuition to break down a complex game into smaller units. This allows for easier manageability. Thanks to this strategy, DeepStack is able to beat its human opponents with a lot of ease.

For many years, researchers and AI developers have relied on games to weigh up the abilities of their programs. AI developers and researchers also use games to benchmark their progress. About two decades ago, artificial intelligence had its first major breakthrough. In 1996, a supercomputer by the name of Deep Blue beat renowned chess champion, Garry Kasparov. Early last year, another AI system, AlphaGo, surprised the world when it convincingly defeated human players in the Go game.

The scientists at the University of Alberta took DeepStack through a rigorous training period that involved various machine learning techniques. This included deep learning. Deep learning is a unique form of machine learning that utilizes multiple algorithms to create better and more advanced concepts.

To help improve its neural networks, the scientists subjected DeepStack to multiple poker scenarios, where it played against itself. By playing against itself, the AI was able to develop and improve its poker instinct and calculate possible poker outcomes. Over time, the AI “learned” complex neural network computations. Then, it was able to apply its poker intuition to tackle poker scenarios it had never stumbled upon before.

Machines have shown that they can learn and acquire human knowledge and adapt to our environments. In poker games, these machines have demonstrated high capacities to take reasonable actions to augment their chances of winning. Some of these machines have even outperformed some of the best human brains in poker games. In the future, expect to see more artificial intelligence programs that are able to play against top poker talents.