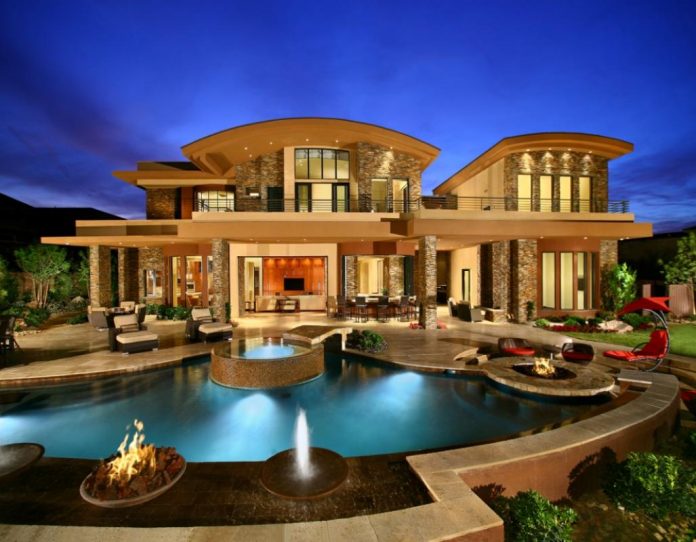 Some of Nevada’s most exorbitant mansions are owned by famous stars such as Celine Dion, Mike Tyson, Andrei Agassi, and Wayne Newton. Many of these properties, though worth an absolute fortune, aren’t the most lavish and expensive ones on the Las Vegas market, and certainly not as quirky as some of the stately homes you can expect to find here either. So we decided to take it upon ourselves to hunt down the biggest, most expensive, and most unusual homes Sin City has to offer! 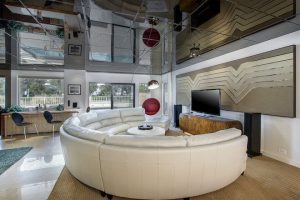 You may be familiar with the famous gangster that used to roam the streets and casinos of Vegas. Frank Rosenthal (or “Lefty” as his peers referred to him as) built this Police-proof home back in the 70s. It was primarily a base for him and his cronies to get together and go about their ‘mob stuff’.

The 2-storey home was part of the city’s first guard-gated housing area, and is complete with bullet proof doors and windows, steel fixtures, gun safes, as well as sound-proofed walls – supposedly enforced to prevent the feds from listening in to their plans and conversations. The refurbishments cost Rosenthal around half a million at the time. As of July this year, the house is on the market for $777,777. 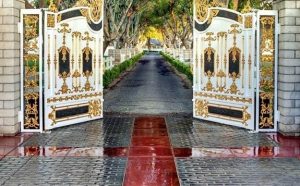 Owned by “Mr Vegas” himself, Wayne Newton; this ginormous 52-acre property sits inconspicuously down Pecos Road and was once covered by a huge concrete wall. When it was eventually knocked down, the property revealed a stunning back yard complete with waterfalls, tall oak trees, ponds, and plenty of luscious greenery.

Newton even has beautiful Arabian horses galloping majestically around the premises, as well as a penguin called Charlie and a monkey called Boo! You’ll also notice a private jet outside! The public were only recently permitted to take a tour of the house, and now it even has its own visitors center and gift shop so guests can take home the experience. Tours start at $35 and run Monday-Saturday from 9:30am – 5:30pm.

If you’re familiar with the A&E hit TV show “Hoarders”, you’ll know about the lieutenant governor and famous neurosurgeon Dr. Lonnie Hammagren. You would think someone in either position would be a bit more organized when it comes to their space and belongings. 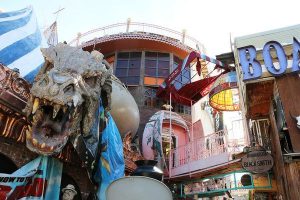 But despite his honorary titles – Hammargren liked to keep hold of clutter! And by clutter, we mean by a Giant T-Rex statue outside the home or a full-scale replica of the Batmobile, then maybe we are overly-criticizing his motives a bit! But apart from those two attractions, the house itself homes a multitude of precious and historical artifacts from around the globe, within several different-themed rooms. Although it is not officially open for tours by the general public, the Doctor did once agree to host an open day there in celebration of Nevada’s 150th birthday.

Located in near the intersection of Charleston Avenue on Las Vegas Boulevard is the Hartland Mansion. Estimated to be worth approximately $3.5 million, this enormous 31,000 sq. ft. abode holds 8 luxurious bedrooms, 9 baths with 4 washrooms, and a “Gone With the Wind” themed staircase connecting the second floor, as well as a 400 capacity “Grand Party Room” with bar, commercial kitchen and a music room with glitter floors and ceiling. 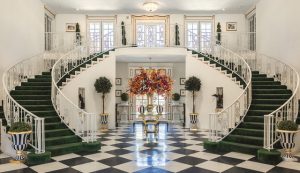 The New Orleans-style antebellum plantation is one of its most famous features, as well as an “Elvis Room”. Over the years the property has had the pleasure of hosting both private and commercial parties, welcoming some of the biggest names in Hollywood and show business such as, Michael Jackson, Englebert Humperdinck, Ginger Rogers, Jackie Collins, CeeLo Green and even Muppet’s damsel Miss Piggy! 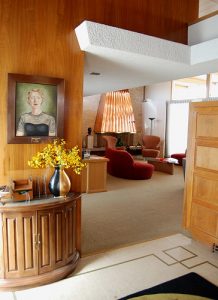 Taking its name from the original owner, famous orchestral conductor and musical director for the Sand’s Hotel & Casino Copa Showroom, Antonio Morelli – this sleek and historical home was built in 1959, and is a prime example of mid-century Las Vegas architecture. Originally the house was situated at 52 Country Club Drive right near the famous Desert Inn Country Club, which overlooked their magnificent golf course.

However, in 2001 when the Wynn Resort was being built, the Junior League moved the house between Ninth and Bridger Avenue to prevent it from being demolished. The relocation and restoration of the property has been documented as a piece of history for brick-and-mortar constructions in mid-century Vegas, and the ongoing preservation of the house is something the citizens of Nevada cherish dearly. In 2012 the Morelli House was added to the National Register of Historic Places, and viewings/tours remain open to the public. 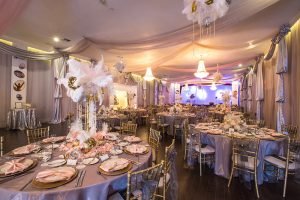 Owned by British businessman Martyn James Ravenhill, the famous and historical Liberace Mansion has been an ongoing restoration project since Ravenhill purchased the estate in 2010 for $500,000, after its market value depleted considerably in 2006 following the Las Vegas housing crisis.

The 14,939 sq. ft. property is now fitted with some of the most exuberant décor, including cherub-filled ceilings, marble pillars, etched mirrored walls, and myriad crystal chandeliers that all together scream elegance and luxury. Currently closed off the public, the house is considered a historic designation to the community here, and the possibility of tours along with being able to use it for events are expected in the not so distant future.

Ted Binion was the famous son of Ben “Benny” Binion and was once one of Vegas’s most notorious casino founders and executives. His 8,000 sq. ft. mansion is one of Vega’s most famous historical landmarks, and a popular site among tourists. Possibly the most interesting and historical fact about this property is that there is a 12-foot-deep vault located underneath, estimated to be worth between $7 million-$14 million; made up of cash, casino chips, silver bullion, and other precious metals. Unfortunately for Binion, his grand treasury went missing after his death, and the contents of the vault played a key role in the investigation of how he died in 1998. 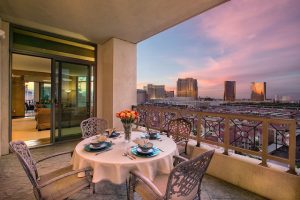 This 5 bedroom, 2 storey, 3,500 sq. ft. property was previously owned by the famous performer Barry Manilow, and is a house bursting with vintage-style luxury and magnificence. On the market since 2009 for $6.95 million, the property is a part of Park Towers, where Manilow lived for several years before moving into there.

The penthouse itself boasts three balconies, a step-down living room outfitted with glass walls from the floor to the ceiling, an Ocean Master suite, vaulted ceilings, a spectacular kitchen, and the most astounding, panoramic views of nearby Vegas beacons, such as the Wynn Resort, Caesars, and the Palazzo. 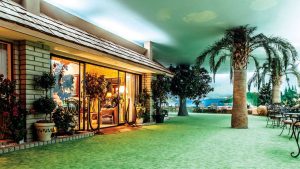 This surely has to be one of the quirkiest ‘houses’ (if you want to call it that) of its kind, as it was originally modelled and constructed in preparation for earthquakes and fire drills during the late 70s. The owner at the time, Jerry B. Henderson, was so paranoid at the idea of a natural or nuclear disaster occurring near his home, he went out of his way to build a bunker in an effort to protect himself and his family.

Inside, you’ll find the oddest features, and practically the whole thing is made out of fake and prosthetic materials, including the trees, flowers, elevators, intercoms and fire alarm systems. With a value of over $1 million and covering more than 5,000 sq. ft., you wouldn’t even know it was there, as it’s situated directly under a normal-looking house! We’d love to find it and explore it for ourselves one day! 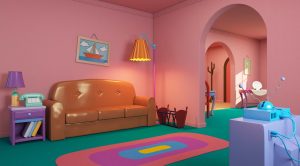 Who doesn’t love the Simpsons? They’ve been gracing our television screens for well over 20 years with Bart’s “Ay carambas,” Homer’s beer and donut obsession, and Marge’s extravagant blue beehive hair. Although they are entirely fictional, they all star in one of the most iconic family-loving cartoons of all time. So it’s no wonder there was a house erected in their name!

Constructed in 1997 as a joint project with Fox and Pepsi; the 2,200 sq. ft. 4-bedroom house is exactly how it’s pictured in the series. From the sailing boat picture hanging on the wall, to the old, beat-up brown couch, Bart’s treehouse, right down to the pink Sedan sat outside on the driveway. It is said there are over 1,000 props in total that replicate and make up the details of the home. There’s no monetary price tag on the house, but we’re pretty sure it would cost a few million Krusty Burgers if it were up for sale!

Of course there are an abundance of celebrities and world-famous names residing in the City of Lights, some privately owning houses here that we are completely unaware of! But if you ever find yourself in Vegas and want to go on a celebrity property scavenger hunt – here are a few good places to start your adventure and get a taste of true Nevada culture at the same time.