Taxation and Gaming in the United States

In the United States, a gambler can face federal income taxes on his or her cash winnings and winnings he or she receives that were not paid in cash, such as cars, vacations, and electronics. If winnings are not cash, you will have to figure the noncash winnings at their full market value, which is the price the objects are worth on the open market. You can get the price of each as estimates on a bill of sale.

If you gambled in a sweepstake, a lottery, a bingo game or a raffle, or you played at a casino and won at a table game, such as poker, slot machines, video poker or a sports bet, you owe a percentage of your winnings. If you are one of the millions of Americans who itemizes your deductions, you can deduct your losses on a Schedule A form. However, if you do itemize your deductions, and you need to report losses from gaming, you have to have an accurate record of your wins and losses in gaming, including any documentation you might have. In other words, you must have a paper trail of your activity.

How Winnings are Taxed 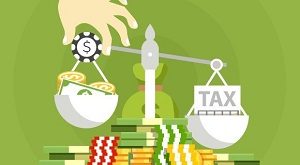 Casinos and other gaming institutions have to give gamers a W-2 form if they win more than $600 or 300 times the wager made. The Internal Revenue Service has specific amounts it requires to be taxed if its recommended amount is exceeded. For example, if you win more than $1,200 on the slot machines or bingo games, you have to report it. Keno winnings of more than $1,500 also have to be taxed. Poker tournaments must tax the winners if they win more than $5,000. Federal taxes in the United States are dependent on total income and may range anywhere from 25 percent to 39 percent.

In addition, winnings in the United States may be subjected to state income taxes. While some states, such as Florida, Tennessee, and Texas, do not have state income taxes, others do. In addition, other states do not tax winnings from gaming. You will need to check with your individual state to determine whether your winnings will be taxed.

How Winnings are Taxed in Canada

Winning in Canada is not as difficult as winning in the United States. While the U.S. spells out exactly how you are supposed to file and how much you have to win before you have to report it as income, Canada does not.

In the United States, different types of money that a citizen gets is considered income. Whether it is earned by working or by winning a game, the government believes income is income. In Canada, the line is very clear. If you are a Canadian citizen, and you win playing at a casino or a horse track, your winnings are not taxed because they are considered winnings on a game of chance and not a steady flow of income, as a job would be.

However, if you are a Canadian citizen, and you gamble as a professional gambler, you owe money in taxes to the Canadian government. Professional gamblers have to pay income tax on their gaming winnings as if they were income. The income tax rate is 15 percent to 29 percent, depending on income. Canada does not rely on its provinces to collect their own taxes. Instead, the Canadian government collects income taxes on behalf of the provinces and then gives it to them in a lump sum.

If Americans gamble in Canada, their winnings are automatically taxed at 30 percent, which is taken when you cash out your winnings.

How Winnings are Taxed in the United Kingdom

In the United Kingdom, winnings are not taxed if a gamer wins. There are no exceptions for different games won in the U.K. However, the United Kingdom gets tax money from gaming in multiple ways. First, the country charges a point of consumption tax on all gaming proceeds. This means that companies where gamblers play are charged a percentage of the amount of money gambled throughout the country. Companies that are offshore must still pay the tax because they take money from gamers who are in the United Kingdom. Also, U.K. companies have to pay additional taxes for gaming, which may make their total tax liability in the neighborhood of 40 percent, depending on company profits and the number of gamers who win.

Because each country is different, you need to make sure you understand the gambling laws in each country before you gamble. While some countries require that noncitizens pay a percentage of their gaming winnings, other countries have declared that noncitizens do not have to pay taxes on their winnings. Many countries believe that by not taxing the winnings from your gambling income, they are encouraging tourism and additional visits to the country. Since all three of the countries discussed rely on income from tourism, this makes it all the easier for tourists to gamble on vacation.