It shouldn’t come as a surprise that a place with a name like the City of Lights uses tons of power each year. From the giant sky beam at the mysterious Luxor to the elegant water fountains at the Bellagio — Las Vegas, as stunning and as magical as it is, soaks up energy like a sponge left out in the rain. And even though Forbes stated in 2016 that the city is powered by 100% renewable resources, it was only the local government that owned up to running all of their operations on renewable energy.

So, all disappointments and false claims aside, what does the city’s power consumption really look like?

With the doors open 24/7 and hundreds of slot machines littering the floors of each venue, Las Vegas casinos are unsurprisingly one of the main contributors to the city’s chronic energy use. Most, however, are managing to turn this around, with Luxor and its iconic beam being one of them.

The giant beacon of light was built in 1993 from thirty nine 7,000 watt bulbs when it was first erected. However, due to the mass power required and intense light pollution, the beam now consists of less than half of what it was powered with originally, with running costs working out to be around $51 per hour.

For the other casinos, it’s estimated that they are responsible for 20% of the city’s yearly consumption; not even accounting for the power that is consumed by the adjoining hotels. On average, a casino’s electricity bill works out to be around $100,000 dollars a month, but for the major casinos such as MGM, this figure often pushes a colossal $350,000 a month.

Nevada has a huge network of power plants, and many of these are situated in Vegas. The state’s primary provider is NV Energy, which has a territory divided by North and South sectors spanning over 4,000 square miles. The peak load of these sectors equates to 1,824 megawatts for the Northern sector and 5,929 megawatts for the Southern territory, with each one drawing power from the national grid.

Not only does the provider supply to over 6,000 power plants in the state, it also plays a significant role in powering casinos. When a venue’s power and backup generators fail, the operator experiences a huge financial loss as a result. After all, it’s not just the gaming floor and hotel rooms that lose power, but also the air conditioning systems, the elevators, security systems, and everything else that requires energy full-time.

You only have to look back at the Rio incident to realize just how much Las Vegas casinos rely on electricity. More than 1,500 guests had to be relocated after the power was knocked out by an elevator fire in 2017. Unfortunately, the backup supply hadn’t been properly installed or serviced in years, and so it was frazzled as soon as the sprinklers came on. This caused absolute chaos for the casino and it’s hotel staff at the time, who then had to deal with the aftermath of insurance and liability, plus massive losses in revenue. 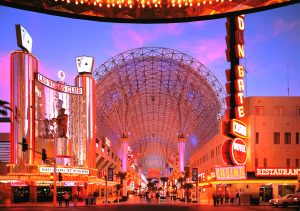 You’ve probably caught glimpses of Fremont Street in movies, music videos and several TV ads. Essentially, it’s just a beautifully-lit rooftop in Downtown, but when you actually get to witness it in person — it’s a whole different spectacle altogether. All year round, guests can experience the most breath-taking light shows powered by 49.3 million energy-efficient LEDs and a 600,000-watt concert sound system.

The Fremont Street experience also features several other power-thirsty attractions, including the largest video screen in the world, which has a length of 1,367 feet and boasts over 16.4 million pixels. The screen’s canopy alone is supported with 220 speakers that are powered by a massive 550,000 watts of amplification. 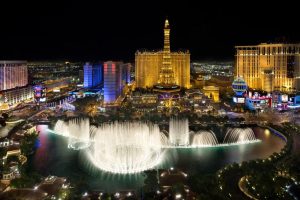 The Bellagio Fountains are one of the most magical attractions in Vegas, but maintaining them requires over 30 engineers to power them constantly. The fountains, which were first turned on in 1993, are set across an 8-acre lake with a network of 1,200 individual water nozzles and over 4,500 LED lights.

For a special, romantic, and personalized experience, it’s possible to turn on the fountains once a night and choose the opening song to kick off the magic. Guests can take in the show from the Bellagio waterfront and bask in the majestic performance with a lavish 30-litre bottle of Ace of Spades champagne. However, as the venue still has to account for the energy costs, such an experience will set you back roughly $250,000. To put this mammoth sum into perspective, that’s 5% of the fountain’s annual electricity bill!

What Does the Future Hold for Las Vegas?

Even though Vegas is still heavily reliant on fossil fuels, it’s one of the few states that’s environmentally conscious and driven to make change. Regardless of the myths, the federal government has been attempting to eliminate harmful and expensive carbon-based energy sources for years. This has so far been achieved by installing hydroelectric turbines, solar panels, and climate-neutral systems to optimize the electrical consumption in casinos, and power more than 140 buildings and streetlights in Sin City. In terms of energy efficiency, the Las Vegas Journal estimates the impact of these actions has saved the city approximately $5 million per year.

Although it’s likely to take 30 years or more before the U.S. can rid even 80% of emissions and greenhouse gases, Vegas is just one within a network of U.S. cities on target and advocating a brighter, cleaner future. From the north coast to the south coast, the ICLEI forecasts that by 2030, more than 200 governments will also have joined the fight to mitigate climate change and prolong the life of our planet.