The popularity of online television is making a serious dent in the viewership of cable television. In a 2017 survey, 28 percent of American adults said it was their main method of watching television. Among the younger generation, the percentage was more than twice that number. Nearly two-thirds (61 percent) of those aged 16 to 29 said it was the main way they watched television. Today, Netflix is the world’s largest online television, followed by Hulu, Amazon, and MyTV.

What is online television?

Online television is the process of delivering television content to the subscribers’ computer and mobile devices over the Internet. Also called Internet TV, web TV or streaming TV, it makes it possible to watch television programs at one’s leisure. It delivers the same content as live TV, but through the Internet rather than through cable, antenna or satellite. All you need is a fast Internet connection.

Development and growth of Online TV

The first versions of online TV became available in the mid-2000s with the advent of broadband Internet. Apple Inc. was one of the first companies to offer television content online. In 2005, the company began offering selected television programs through its iTunes platform. Popular video-sharing site YouTube launched the same year.

Television networks and other digital content providers entered the fray soon after. They created sites to stream programs and shows. In 2006, Amazon launched the Amazon Unbox, which later became Amazon Video. Netflix, a company whose main business was DVD rentals, launched streaming video services in 2007. Television networks NBC and Fox entered the market with Hulu in 2008. CBS followed suit with tv.com in 2009. 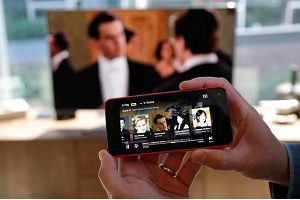 The next stage in the development of online TV began with the advent of smartphones. Apple iPhone opened the floodgates to recently unknown opportunities in television broadcasting. Apps for mobile phones started to become available. Apple launched Apple TV – a digital media player and microconsole — in 2007. Roku Inc. announced Roku players in 2008. Roku players receive video stream via Wi-Fi or a wired connection. They output the data via an audio or video cable or directly via an HDMI connection.

The technologies behind online television

OTT is short for “over-the-top.” It is the method of delivering television content and films to users via the Internet. It uses the public Internet and doesn’t require users to subscribe to a cable or satellite network provider. Since many users may share the same line, users may not get enough bandwidth for a seamless viewing experience. However, those who have very high bandwidth Internet should not have any problems.

IPTV is short for Internet Protocol Television. IPTV delivers television content using the Internet protocol just like other online TV technologies. While IPTV is a form of OTT, it operates differently. IPTV operates in a closed network managed by a local cable or fiber-optic company. This means users have to subscribe to a cable or satellite network provider. It has one big advantage and that is each customer gets enough bandwidth.

Seven apps that are revolutionizing the way we watch television

Here are seven online TV technologies that are revolutionizing (or are going to revolutionize) the way we watch television:

Some of the Best Online TVs

There are hundreds of online television services around the world. The following are some of the most well-known and popular.

Thus, online TV is taking over the networks and it is not difficult to see why. It offers the kind of flexibility and ease that traditional television can’t.