Researchers have estimated that factories around the world make 260 million pounds of plastic each year. Of those 260 million pounds, approximately 26 million pounds ends up in the world’s oceans each year. In the past, no one paid attention to the amount of plastic dumped into the ocean every year. The thinking was that oceans were so large, they could absorb any trash. However, that is not the case. The question is: How do we clean up the enormous amounts of trash in the oceans?

Recent studies have indicated the plastic in the world’s oceans does not biodegrade, and it is harming animals in the ocean. There are several stories in research journals, as well as the news. Turtles, seals, and whales have shown up dead on beaches around the world. Unfortunately, their breathing holes, flippers or mouths have been blocked with plastic. Most recently, articles were written about a baby manatee (an endangered species) in Florida chewing on plastic in a river. This story has tugged at heartstrings.

The most recent research has centered on a large mass of trash in the Central North Pacific. This large mass of trash is called the Great Pacific Garbage Patch (GPGP). The patch is estimated by scientists to be about 617,000 square miles in diameter. The patch is a combination of plastics and chemical sludge. The garbage patch was first noticed by sailors in the 1980s, midway between California and Hawaii. It highlights the debate on how to clean up the oceans. Many scientists believe that the world needs to begin with the GPGP.

Cleaning Up the Garbage Patch 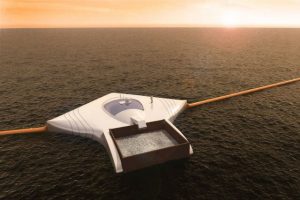 Scientists have been trying to figure out a way to begin to tackle the GPGP for the last 10 years. After several attempts, a possible solution has been proposed and funded by a consortium of business, environmental and private donations. The system cost over $20 million to build, and it is hoping to reuse and recycle the ocean plastic. The system consists of a series of brooms. The brooms will rake and trap over 150,000 pounds of plastic floating between California and Hawaii yearly. An 18-year-old environmental scientist from the Netherlands invented the broom system.

Until now, there was no real solution to the garbage patch problem. Part of the issue was because of two separate spinning whirlpools of trash, with a zone of floating trash in the middle. Previous inventions did not address the movement of the trash. However, the inventor of the broom system is relying on the circulation of the trash to drive it into the brooms.

The broom system was deployed to begin collecting garbage late last month. The broom will signal a ship when it is full of trash. The ship will go to the broom to dump the plastic onto the ship and sort it for recycling. The hope is that nearly all of the plastic collected can be reused and recycled once it gets to shore. The hope is also that the entire huge circulating garbage dump will be cleaned up in 20 years.

Many people are asking: What can we do to clean up the oceans before we have to deploy brooms all over the world? 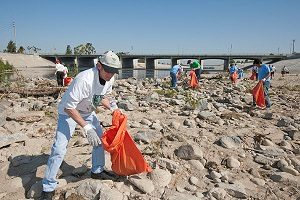 One of the most comprehensive ideas is to rid the shores of plastic as soon as it washes up. Numerous articles were written over the last 10 years about cleaning the shores and recycling plastic. For example, one man spent an entire year traveling up and down the Mississippi River with his family, picking up garbage. The man’s family picked up everything from tons of plastic bottles to arranging for entire cars to be lifted out of the river. Recently, the man was awarded a CNN Change Award. This award allowed him to continue to get volunteers to assist cleaning the longest river system in the United States.

Many small charities and environmental organizations have sponsored local river, lake, and beach cleanups. In the past, cleanups meant the plastic and other supplies were going to the landfills. However, now the trash from the waterways are being separated out and sent for recycling.

There is a greater effort made to recycle and reuse plastics found in waterways. Recycling ensures the plastic does not end up back in the water. The plastic is sorted and sent to companies, so that as much of it can be reused as possible. Companies take the plastic, shred it, bleach it, and use it to pave roadways in Europe, especially in the Netherlands. The plastic roads are lightweight and reflect the sun’s rays, rather than absorbing the heat. Therefore, the roads are not as hot.

The plan is to encourage people to buy items made from recycled plastic. Nearly anything that you can think of can be made out of plastic. Scientists are finding new services for the plastic. One example of the uses for plastic is in clothing. Plastic clothing is lightweight and waterproof, which is great for hunters, farmers, and others that work outside. When people buy the plastic from the garbage patch, they contribute to a fund to help the broom operational.

According to research, reducing or eliminating discarded plastic, and reusing plastic benefits the oceans. Once plastic ends up in the lakes or rivers, scientists say it eventually finds its way into the ocean. It will eventually end up in the giant garbage dump in the middle of the Pacific, or possibly inside the body of an animal. If humans can be mindful rather than wasteful, scientists say the ocean can be cleaned up in less than a generation.