Home » USA Online Casino Blog » How to Get an Airline Upgrade

We all claim not to care about being treated as someone special. However, all of us at one time or another, really love to get special treatment. Maybe it is when someone does valet parking for you and doesn’t charge you. Or perhaps it is because someone upsized your coffee at your favorite coffee shop. That entire excitement aside, there is nothing that allows you to feel like a king or a queen more than getting an upgrade to business class or first class. Want to get that feeling of class all the time? Here are some instructions on how to get an airline upgrade.

In the past, airline upgrades were doled out like candy. Some people were lucky enough to get the candy, while others—not so much. Advice columns would tell you that if you traveled frequently, eventually you would get handed an upgrade to first class.

There were also those people who believed that if you dressed like a person doing business, spoke cordially and politely, and fly the airline regularly, you had a better chance of getting an upgrade. Some people have also tried being agreeable to getting bumped on a crowded flight, or allowing a family to sit together.

However, these days things have changed. Airlines, facing the shortage of passengers and rising costs, starting making passengers pay for everything they wanted to add on, including upgrades. On average, an upgrade to either business or first class is going to cost you between $50 and $100 per ticket. Airlines are trying to squeeze every dollar out of you they can, which means they are going to tell you that they don’t have any openings. Often, flights are full, seats are assigned by computer, and there are more people who want your prized upgraded seat. However, just because it is more difficult to get a seat does not mean it is impossible.

Think About When to Use First Class Upgrades 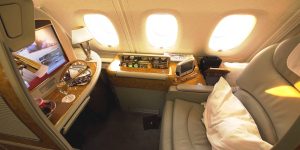 While it would be lovely to fly first class all of the time, those free upgrades can’t be used every time you fly, so you need to think about when you might really need those upgraded seats. If you are flying domestic, you need to think about whether or not first class is really necessary. Think about it. For most domestic flight, you get a little leg room, and a glass of wine. You listen to the same movies using the same phones as the plebeians in coach. The only difference between coach and first class on domestic flights is that you may avoid some of the delays in airport security, which is nice if you can get it.

On the other hand, international flights are a whole different story. International first class means your chair converts to a bed to sleep. You also get premium food and drink. You also get expedited movement through security. If you are thinking of flying internationally, this would be a great time to ask for an upgrade.

These days, the airline system is way more automated than they used to be. Nowadays, nearly 100% of upgrades are not done at the ticket counter. Instead, they are done online, when you make your reservation. Planes are trying to stack as many people in their seats as possible, which doesn’t leave a whole lot of wiggle room for an upgrade. Also, several airlines have a strict policy against issuing upgrades without a good reason. Other airlines also opt for an electronic queue for upgrades. For example, sometimes upgrades are issued when someone cashes in miles to be upgraded. Other times, a premium or elite club flyer with the highest ranking on the flight will be given the upgrade. It could also be that a person can upgrade if they paid a little extra in coach fares to get an opportunity to upgrade. Ready to try and snag a free upgrade anyway, despite the odds. Here are some tips.

Steps, Tips and Tricks for Getting an Upgrade

First, before you even begin to ask for an upgrade, you need to look at your appearance. Are you dressed neatly and professionally? If you have on your best leggings with the hole in the thigh, your hot pink Converse, and your mom’s favorite Duran Duran concert t-shirt circa 1985, you do not have a chance of getting a free upgrade. However, if you are wearing slacks with a dress shirt, a suit, or a dress, your chances are better. Not only might you get an upgrade, but people might want to sit next to you as well.

If you do want to ask for an upgrade, you need to have an idea of when would be a good time to ask. Don’t show up late, and ask the harried ticket agent if they have an upgrade available. Show up early, with lots of extra time before the flight, and ask politely to be considered for an upgraded seat. Manners still matter. You can ask directly for what you want, but adding a “please” isn’t going to kill you. You will also have a better chance of getting an upgrade if you are traveling by yourself on a fare that is eligible to upgrade and with little baggage. The louder and demanding you are, the less likely you are going to get an upgrade, and the more likely the agents will give it to someone else.

You also need to keep in mind what is going on around you. For example, if you are sitting in an empty coach, and business class is also empty you are far less likely to be granted an upgrade. Instead, the airline will take the loss on the flight. However, if the flight you are on is full, you have a far better chance of being upgraded so that everyone is able to get on the flight.

If the flight is oversold, you can volunteer to give up your seat, especially if someone needs to get on the flight. If the airline tells you that the flight is booked, you can ask to be upgraded on your return flight.

On international flights, many ticket agents have a great deal of latitude with the upgrade. If you want to upgrade on an international flight, first ask about the availability of upgrading at check-in. You can then follow up by asking at the gate. If an upgrade is possible, the ticket agents are more likely to do it when all the passengers have checked in. Keep checking at the gate while passengers are called, and let them know you are still interested without being obnoxious.

If you follow these tips, you may be flying and rubbing elbows with those first-class passengers before you know it.