The popularity of casino games is growing. This is especially true of online casino gaming. People are always looking for new types of games to play at online casinos. One of the “new” online casino games, Sic Bo, is actually an old game. Sic Bo originated in China. It is rapidly becoming one of the most popular dice games in online gaming. But, how do you play, and, more importantly, how do you bet?

What Is Sic Bo?

No one knows exactly how old Sic Bo is. Chinese for “precious dice,” Sic Bo first appear in the United States in the late 19th and early 20th centuries. Chinese immigrants brought it to the country with them. This three-dice game actually has several names. Dai sui and dai sai, which mean big or small, are just two of them.

There are some casinos that offer Sic Bo as a live game. It has also become popular as an online casino game. There are casinos in Macau and the United Kingdom that allow people to play it live. People who play Sic Bo in the Philippines call the game Hi-Lo. However, if you play online, you can play all over the world.

In the past, players played the game on a table. The table looked a lot like the traditional roulette table. Historians think the Chinese originally played Sic Bo as a two-dice game. Eventually, it became a three-dice game to make betting more challenging. Many people like the three-dice game because they think it makes the game more interesting to play.

How Do You Play? 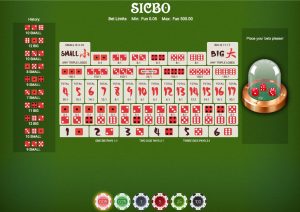 Traditionally, players in Asian casinos played Sic Bo using the standard six-sided dice. Players would place them in a cup or basket and shake them. They would place bets on which combinations of the three dice would appear. Just like roulette, players could place more than one bet. In modern casinos, a machine shakes the dice. Then, the table displays the results by lighting up the winning combination. Some casinos have a dealer shake the dice in a closed box or chest. Then, he or she opens the box to show the results. Sic Bo is a popular casino game. Many players feel the game offers them a decent shot at winning some big money.

There is also a very popular online version. It works much the same way as the traditional casino game. The computer shakes the dice, and the winning numbers light up on the online table.

To win at Sic Bo, you have to bet on the outcome of the roll of the dice. If you are playing in a casino, you choose the size of the bet you want to make. You do this by deciding the size of the chip you want to use to make the bet. Then, you place your chips on the table. Make sure you place your bets in the correct area. This works exactly the same way as the roulette or craps table. You will not win on the numbers you wanted if you have placed your bet somewhere else on the table. If you are playing online, you first place a bet by selecting a chip size and amount. Then, you move your chips to the area of the online table. In both versions of the game, you can place multiple bets. The bets can be for different amounts as well.

How to Bet Effectively

Like other games, such as roulette and craps, the odds of winning Sic Bo vary. The odds range from even money on some bets to 180-1 odds on others. Many people like Sic Bo because it is largely a game of luck. However, that does not mean you play the game blindly. You have to think about the way you are going to bet before the deal shakes the dice.

Here are a few ideas on Sic Bo betting.

A lot of players begin by betting on dice combinations. For example, players often bet the specific triple. This means you bet the same number will come up on all three dice. You can also bet that at least two of the three dice rolled will show the same number. Totals bets are also popular. In a total bet, the sum of the three dice must add up to a specific number. For example, if you bet 10 as the number, the dice could read four-four-two or one-four-five. Any combination of numbers adding up to 10 means a win for you. Some players also bet combinations of two dice or a single dice bet.

Is There a Good Winning Strategy for Sic Bo?

It is true that Sic Bo is a game of chance and luck. However, many players believe that having a strategy beforehand is helpful. There are several strategies you can try.

People who have been playing Sic Bo for a long time often play either the small bet or the big bet. A lot of people try to bet that a single number will come up during the game. The reason for this is if their single number does come up, the payout is usually bigger. However, the odds of winning are much lower. Over time, if you place your bets on the small bet or the big one, you will increase your bankroll. Who doesn’t want that?

When to Risk More

Do you have a nice bankroll? Then, it won’t kill you to take a chance on a single-number bet every once in a while. The longer you play Sic Bo, the greater your chances of winning at a single-number bet. The reason is you will be familiar with the game. You need to remember the common gambling strategies, of course. You are only risking a portion of your bankroll on a high-risk bet, not the whole bankroll. You also need to set a budget ahead of time. Make sure that when you meet your budget for the day, you stop playing.

Sic Bo, like other games of chance, can be fun and entertaining. But, do not blow your whole bankroll in one evening. Sic Bo is a great game of chance, and many people love playing the online version. Good luck, and here’s to those lucky numbers coming up for you!