Architects have been constructing buildings as long as there have been buildings. Some structures have stood the test of time, and are still beautiful. Other buildings that were modern a few decades ago seem outdated. In fact, some of the buildings in the world can be identified by when they were constructed.

It is the same way with casino architecture. There are a few examples of casinos in Europe and North America that are over 100 years old and are still beautiful. Other casinos are dated and out of fashion. Today’s casinos have been created as places where anything is possible; where glamour, thrill, and luxury are everywhere. In fact, casino architects are commissioned to create palaces where people can feel excitement and a sense of wonder. Casino architects who have truly done a beautiful job are rare, but examples do exist. Here are some famous casino architects, and the buildings they created.

Caesar’s Palace was conceived in the 1960s by architect Jay Sarno. His vision has been duplicated through several renovations, all in keeping with his original ideas. Sarno’s vision was to bring back the times of the Greco-Roman empire, with exquisite marble and statuary. But Sarno went further, remembering the huge movie sets of the period, such as Cleopatra and Ben Hur. Sarno wanted his casino design to be larger than life. At the entrance to Caesar’s Palace stands a huge statue of Julius Caesar that welcomes guests into the paradise of the casino. Visitors experience Greco-Roman opulence from the statuary to the Roman baths and shops in the resort.

The original concept for The Bellagio was created by real estate mogul Steve Wynn. The architectural firm of DeRuyter Butler, with the project head of Peter Smith, created the exterior. Roger Thomas, a repeated winner of the Architectural Digest 100 Award, designed the interior. Thomas is a frequent architect for Wynn Properties. Peter Smith and Roger Thomas are responsible for the fountains, the exterior Lake Como-like palazzo designs, and the lobby ceiling. The 20,000 flowers on the ceiling in the lobby were blown individually. The architects also designed a conservatory and art gallery, which makes this casino something out of the ordinary—even for Las Vegas. 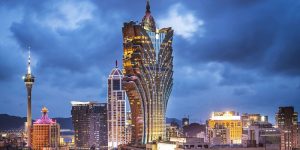 Among the thirty-eight casinos in Macau, one casino stands out. The Grand Lisboa, created by Hong Kong architects Dennis Lau and Ng Chun Man. It is the tallest building in Macau at forty-seven stories tall. However, that is not why the casino is the most striking. The two architects wanted to conceive a casino that was expressive, daring, and reflected the peninsula’s ocean and explorer heritage. The building reminds some people of the former Portuguese colony’s reputation for opulence and treasures from Asia. Other people believe the architects created the design to be fluid, not unlike the waves in the ocean nearby. The interior of the casino also reflects the architects’ vision of opulence and exploration from a different time. From the exquisite chandeliers in the lobby to the windows, visitors get one of kind views of the skyline.

Aedas and HKS, The Venetian Macau

To say that the Venetian Macau is extraordinary is not enough. It was modeled after its sister casino in Las Vegas. The Venetian Macau is the world’s largest casino, with over 550,000 square feet of gaming space. In addition, the architects created the canals of Venice, which lead to restaurants and shops in the area. There are even gondoliers to ferry customers back and forth in the casino area to restaurants and shopping.

The partnership between Aedas and HKS began casino architecture with the Sands Macau. However, their casino-building career really took off with the design of the Venetian. After the Venetian, they did the Four Seasons Macau, the Sands Cotai Central, the Marina Bay Sands in Singapore, and the Parisian Macau. 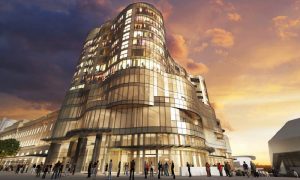 One of the most unique designs in Australia is a merging of a historic train station with the addition of new architecture. This casino is located in Adelaide. This merging concept keeps to the overall design of the historic property while allowing for modernization. Buchan Architects have created a boutique casino while keeping traditions intact. The small casino has 90 gaming tables and 950 gaming machines. The wavelike design of the casino has merged with the historical façade. The merge allows clients to see the history of the building and its shiny new exterior as well. The use of gold-tinted glass blends interestingly with the golden tinged stone of the old train station.

The venue has been selected as the crown jewel in the City Centre of Adelaide. It has also won several awards for the use of its historical property. The interior of the casino follows a more modern boutique mid-century design, with lavishness.

Crown Casino in Melbourne was conceived by Daryl Jackson. He wanted the casino to become the hallmark of the riverfront on the Yarra River. Jackson stated his vision for the casino resort included lights and glass to create a shining spectacle for the area. The resort offers clean lines that reflect the river as well as the lights themselves. The casino offers over 200,000 square feet of gaming space, nearly 2,000 hotel rooms, as well as restaurants and shops. Jackson has won dozens of awards for his modernistic designs of the casino and other buildings in Melbourne.

One of the newest casinos in Atlantic City deserves mention. The Ocean Casino Resort, which opened this summer, was designed by Michael Prifti. The architect wanted a casino to blend into the ocean and the boardwalk. He has done that with the extraordinary use of glass and a curved building resembling a wave. While there are many casinos in Atlantic City, the Ocean Casino Resort stands out as a beautiful addition to the waterfront. The interior design is understated for a casino. Rather than over the top opulence, the casino has a minimalist design and neutral palettes, with an emphasis on an exquisite restaurant and wine menu.

Each of these architects differs as to their vision for what they wanted the casino to be. There is no question the architects created something different. It takes a masterful architect to design an amazing structure.