During the recent Global Gaming Expo, the issue of gaming and non-gaming activities was definitely a topic of discussion. Business owners and executives insist that both of these revenue sources are extremely important when it comes to establishing an effective revenue strategy. There are also some properties that are looking to invest in more amenities that are available off and on the floor of the gaming area.

Not every casino and gaming establishment will do as many things to create non-gaming revenue the way that MGM Resorts has. MGM has built a T-Mobile Arena on the Strip in partnership with Anschutz Entertainment Group for hundreds of millions of dollars. Rick Arpin, the senior VP of entertainment stated that there is a significant rationale for investing in the T-Mobile Arena. The space will attract a diverse patron group, which means better revenue for the city overall. Arpin says that he and other business owners participated in a panel for G2E and stated that non-gaming activities can bring in more revenue for other properties that are looking to provide diverse attractions or tourists. Arpin said that providing a variety of activities is the premise that the arena was built on. He shares that there was a gap in terms of facility quality and that the space will bring events to the city that wouldn’t otherwise be there. MGM understands that different customers want different experiences when they’re visiting Las Vegas. Some people who visit the city don’t want to engage in risky activities like gambling, but still enjoy the excitement of the area.

Arpin emphasizes that the people who are walking near the park at The Linq visiting the T-Mobile Arena are a different generation than people who would have been in the area decades ago. He shares that thirty years ago, customers looking for a gaming table commonly visited the area. Twenty years ago, most of the visitors wanted to find a slot machine or two.  About a decade ago, the main attraction of the area was likely a restaurant. Just five years ago, vacationers who were lodging near The Linq were probably searching for a spa. The area is continuing to evolve, and business owners should work to find out how people are going to maintain their interest in the city of Las Vegas. This means that a variety of social activities and unforgettable experiences are finding their way to the city.

Is There a Return on Investment?

Seneca Gaming Corporation president and CEO Holly Gagnon stated that there are several amenities specifically aimed at Las Vegas vacationers who aren’t gamblers. Instead of concentrating on the bottom-line return on investment when it comes to the hospitality industry, business owners and executives are advised to focus on the positive effects that brand value can bring to their establishments.

When one of Gagnon’s properties hosted a concert for KISS, the revenue didn’t entirely come from the casino floor the night of the concert. However, Gagnon was quite pleased with the number of patrons that came into the resort, which resulted in a public relations win for the business. She shares that her corporation seeks to ensure that the brands it works with are aligned with customer needs and Seneca’s business goals. The CEO shares that Seneca is noting both the financial success and added marquee value that comes from such as event. Gagnon wants profitability to last for a lifetime.

It’s very important for businesses in the gaming industry to stand out these days. This is especially true since the industry is beginning to become more popular outside of Las Vegas as well, according to Arpin. He shares that people are talking about how the Vegas market is changing from being known exclusively for gaming to an overall entertainment venue. Brands that recognize the shift and offer mainstream activities are likely to be the forerunners in attracting new, non-gaming revenue to the city.

Non-Gaming Commerce and Loyalty to Casinos

Gagnon also shared that Seneca Gaming is looking into making changes to the players club. This will allow members to earn rewards for spending money on non-gaming activities. Arpin says that this has actually been quite beneficial for MGM in the short time the program has been in effect.

Arpin says that it’s important to learn more about the customer, and for businesses to try to make consumers feel valued. He asserts that this lets the customer know how valuable they are to the company. When consumers have unique experiences and exclusive privileges, they are more likely to return to the resort or gaming facility for future vacations. Arpin said that the choice to incorporate non-gaming rewards into his company’s M Life loyalty program was a no-brainer. However, integrating the back-end systems for MGM and finding methods for keeping track of customer data was much more difficult.

Even though the task is challenging, panelist Tom Soukup, Konami Gaming chief systems product officer, said that this part of customer service is important. Soukup shares that the player tracking methods were originally used for gaming tables or slots. This meant that it was hard to tell how much a patron was spending at restaurants or in the hotel, in general. Consumers might welcome the chance to earn integration points for being loyal to a resort instead of only acknowledging gaming activities. 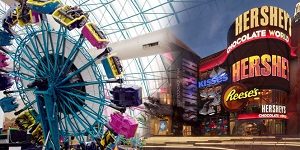 If you’re planning a trip to Vegas soon and want to know what you can do that doesn’t involve gambling, you’ve got more options than ever. Vegas has some great restaurants, including buffets, so you can get a great meal for a reasonable price. The Paris Hotel has a buffet that many vacationers enjoy.  You can also check out Caesar’s Palace and the Wynn Hotel for tasty food. Virtually every hotel located on the Strip has breakfast, lunch and dinner buffets, so even if you’re a picky eater, there’s a good chance you’ll find something you like.

If you’re into fine dining, try Tom Colicchio’s located in MGM. Nobu in Caesar’s Palace is also a great choice, and Bobby Flay’s Mesa Grill has delicious food and a semi-casual atmosphere.

Las Vegas is also one of the best places to go shopping. You’ll find medium and high-end fashion choices at the facilities in Caesar’s Palace and Planet Hollywood. If you want to get exclusive items from boutiques, the Palazzo or Wynn hotels will likely have shoes, accessories and apparel. Fashion Show Mall is another beautiful location or shopping, and features artwork and attractions that are opulent and fascinating.

Of course, you can also go see a show or two while you’re in Vegas. After all, the city is known for entertainment. Celine Dion, Britney Spears and Jennifer Lopez have all held residencies there while sometimes perform at popular locations like Caesar’s Palace and Planet Hollywood. You can also see a magic show by David Copperfield or watch a Broadway show like Jersey Boys. Be sure to get tickets for these events as far in advance as possible so that you can plan your trip accordingly and see all the non-gaming events Vegas has to offer.