Why Would You Need Edible Coffee Cups?

Americans consume more cups of coffee than any other country in the world — around 146 billion cups each year. If Americans are using mugs to drink their coffee, then the environment is better off. However, researchers estimate that more than 100 billion paper cups end up in landfills each year, and that is a lot of trash. Because people are trying to reduce the amount of waste that ends up in landfills, many businesses are looking for a solution to the problem of excess paper. 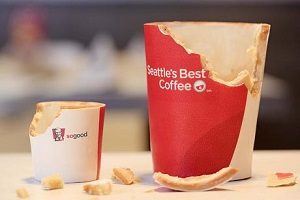 Gradually, other companies began to work on and market edible coffee cups. KFC, which is always looking for gimmicky food and drinks to boost its business, has also invented a “Scoff-ee cup,” which smells like fresh cut grass, but tastes like chocolate. This gives it an advantage over the whole grain cup from Central Europe. The cup is made from a cookie wrapped in edible sugar paper and lined with white chocolate that has been made resistant to heat. While you are drinking the coffee, the chocolate slowly melts into it. KFC is also working on making the edible cups more aromatic. It is working with a London-based experimental food company, The Robin Collective, to infuse the cups with smells other than the smell of grass. Future scents for the cups might include coconut cream and wildflower.

Edible Coffee Cups in the U.S.

While European companies appear to have gotten in on the ground floor with regard to edible coffee cups, the cups have also made their way to the United States. One inventor, New York-based chef Dominique Ansel, is working on edible cups. Years ago, he invented the cronut (a cross between a croissant and a donut). Now, he has jumped on the bandwagon of edible coffee cups. Some people say he began the edible coffee cup trend. Ansel began by selling milk in cookie cups, which he called milk and cookie shots. He has now made the cookie cups available to put coffee in at his bakery in New York City. 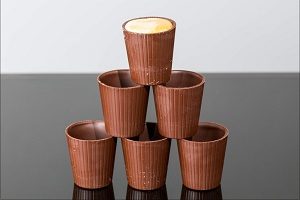 Edible coffee cups have also hit the West Coast, especially in Los Angeles. At Alfred Coffee and Kitchen, customers can pick up little espresso cups in edible cups that are dipped in chocolate. And, much like the Scoff-ee cup, the chocolate melts into the drink as you sip it. In addition, other stores in Los Angeles are moving toward offering cold coffee in the espresso-edible cup. The cups are larger, however, and you can select either dark chocolate or white chocolate. Some coffee shops are working toward infusing the cold coffee with nitrogen bubbles to make the coffee even colder. But, they have to be careful with nitro coffee and edible coffee cups because the chocolate on the cups can become brittle and break off, and no one wants a lapful of coffee.

In addition, companies are trying different flavors besides the “coffee” flavors. Especially popular along the West Coast are flavored coffees from the Oaxaca region of Mexico, which are flavored with fruit, such as strawberry and watermelon. Two countries in Africa are also supplying coffee for the edible trend. Coffee from Malawi pairs well with the candy cups because it has citrus and floral notes. Uganda’s coffee is especially sweet and turns the edible coffee cup into an edible dessert. 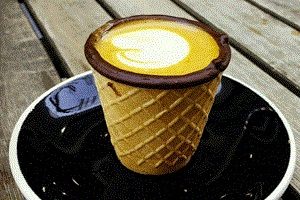 Australian coffee shops have created a different kind of coffee cup from those in Europe or the United States. Unlike the coffee cups made solely of chocolate and sugar paper, wheat or cookies, the coffee cups in Australia are wafer cups, much like waffle cones in the United States. The wafer cup is coated on the inside of the cup with chocolate and has a flat bottom so it can be placed on a table. Unlike the chocolate-coated cups in Europe, this cup is only good for about 10 minutes before it starts to melt, so you will need to drink your coffee quickly.

Other Types of Edible Cups

Edible cups have not just been used for coffee. They have also been used for other types of treats and treasures people eat and drink. Lollicups come in green tea flavor, citrus, cherry, and vanilla, and bills itself as the alternative to disposable cups. The company also has Lollistraws in a variety of flavors. Right now, these cups can only be used for cold drinks, including cold coffee, but the company is currently looking at ways to market a cup for warm beverages.

The Lollicups can be eaten or can be composted in a backyard composting pile or a home composting bin. If a cup is thrown out without composting, the creators say it can quickly become a snack for wildlife or decompose. The cups also decompose quickly in waterways. This makes them a useful resource to take camping or fishing and makes these cups better than the current bioplastics on the market. Lollicups were first designed for a food competition in 2010. The company has rapidly progressed from a seed money company that tinkered with molds and a baking process to one that offers different flavors to bars and restaurants, which are currently its main customers. The cups have also been used as a dessert cup as well, which means everything is edible. The cups, which come with compostable paper sleeves, can be cleaned and refilled several times before they have to be discarded.

Other cups have been made for desserts, including coffee desserts, which comprise everything from a sugared phyllo dough and chocolate sponge cup and mini spoons, to a vegetable oil and chocolate cup for warm beverages, such as coffee. It appears that the possibilities are endless with regard to cups for warm or cold varieties of coffee.

Edible cups, either because people want to drink coffee out of a novelty container, or because people are growing more environmentally conscious, are the new trend in bars, restaurants, and eateries. While people may have originally chosen to use the cups because they are novelties, there is no question that edible cups are just the beginning. It is expected that in the next five years, edible plates, glasses, and bowls will make an appearance, which may work to greatly reduce the amount of paper waste in landfills. It is always nice to be both trendy and environmentally conscious, as these coffee cups allow you to be.