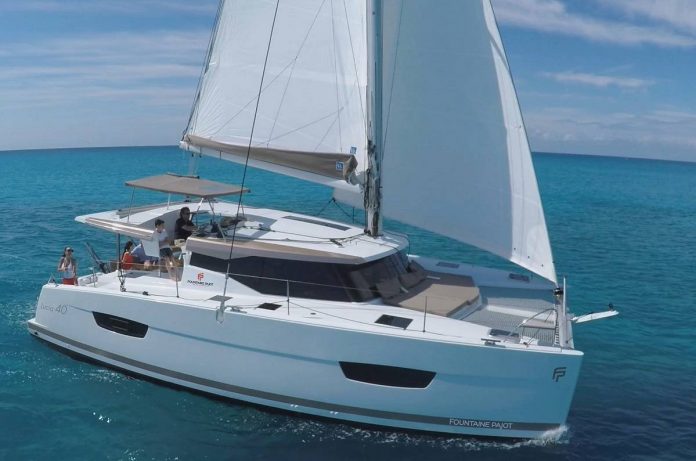 In the century of powerboats and outboard motors, why do people still bother wrestling with cloth on strings just to drift wherever the wind takes them? Maybe it’s the nostalgic feeling of sailing away at the mercy of the weather, or the inner pirate carried by the boy into manhood. Whatever the reason, the following sailboats are the coolest in the world.

When Money Is No Object

If you have a $59 million burning a hole in your pocket, you can practically buy your way into the aristocracy in one of the largest sailing yachts in the world: the 295-foot-long Athena. Any boat named after a goddess should embody the pinnacle of beauty, wisdom, and luxury, and something beyond the reach of most mere mortals. Athena isn’t your ordinary clipper-bowed, three-masted, gaff-rigged schooner. She’s got all the grace and beauty of a luxury hotel in her heart of hearts.

Athena was built in 2004 at the Royal Huisman Shipyard in the Netherlands, and decked out with every luxury conceivable. In addition to a variety of lavish mahogany-ensconced saloons, dining rooms, and a gym, the boat has 5 cabins to sleep 12 people, not including quarters for a crew/staff of 22. And once you’ve gone this far, you might as well install a marble and mahogany master suite with a large marble Jacuzzi tub. Add to that numerous sun decks, lounge spaces, and full aquatic sports equipment like scuba gear, and you’re well on your way to having the most expensive luxury hotel with sails.

But don’t worry about the $59 million price tag just yet. You’d have to be 3 sheets to the wind to spend that kind of dough. Fortunately, while the owner is looking to hook a big whale buyer, you can take her for a charter cruise in the Caribbean—or wherever Athena happens to be—for a cool $450,000 per week. For that amount of dosh you’re hardly expected to hoist a sail or turn over an engine. The crew will do all the heavy hoisting while you sun on the deck with umbrella drinks. 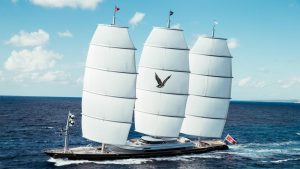 The next up in the line of luxury sailing yachts designed to blow your hair back is the Maltese Falcon. This bird is a 285-foot, full-rigged ship with DynaRig sails built by Perini Navi in 2006. The DynaRig design appears to mimic 19th century sailboats, but the massive, rotating steel masts are computer controlled. The complex design allows the vessel to be sailed by a minimal crew, and in a crunch she can be sailed by a single person.

The interior of the Falcon is decked out with the ultimate in modern luxury, with accents of Japanese influence in the design. The name of the boat inspires the film-based entertainment on board. Several Maltese Falcon statues and sculptures adorn the interior, and of course there is a full cinema for film screenings. And if the evening weather is too nice for sitting indoors watching movies, you can simply retire to the open deck for an open air sailboat cinema, superyacht style. Films are actually projected onto one of the sails, drive-in movie style, and powerful deck speakers drive the sound. How cool is that?

The Maltese Falcon boasts 6 double cabins to accommodate 12 guests in addition to space for 18 crew members. The master bedroom has a private gym, and a circular stairway unites the 3 decks. The vessel is also equipped with a huge number of toys and sporting gear, including several tenders, dinghies, jet skis, wave runners, windsurfers, diving gear, and even a water slide and an anti-jelly fish sea pool.

The Falcon’s owner says the yacht is valued at over $150 million, but don’t let that spoil your budget. If you have $400,000 lying around, you can charter the boat for a week. And if you decide to grace the decks of this fine vessel, you would be in good company, as Tom Hanks and Hugh Jackman have both taken the Falcon for a spin. 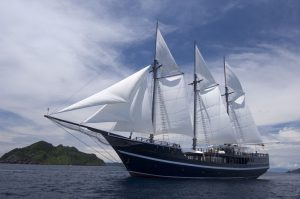 If you prefer the classic look of an old sailing schooner in the style of a pirate ship, the Dewi-Nusantara is the modern version. It’s filled with all of the hardwood and rum a sailor needs for a week at sea, plus a host of luxurious extras that earned the ship the title of “The best dive liveaboard in the world 2018.” Hailing from Indonesia, the Dewi-Nusantara is a liveaboard vessel designed for diving adventures. And since Indonesia is home to some of the best diving opportunities on the planet, this is the perfect vessel to sail away to adventure.

The ship has one of the largest private cabins in the world at 500 square feet. The master suite covers the entire width of the vessel, allowing for 180-degree ocean views. There is ample room for 18 guests along 190 feet of sailing vessel. 11 nights aboard the boat start at the user-friendly price of around $7,000 – $8,000 per person, meaning that you don’t have to spend millions to sail the tropics like an ancient mariner. 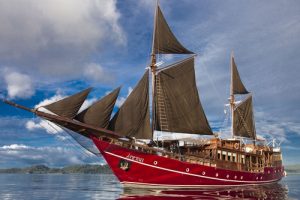 For more wood-and-cloth schooner adventures, the Arenui combines a classic Indonesian Phinisi sailboat with a modern luxury hotel feel. The ship is made of 12 different types of wood in 140 feet of sailing vessel. Eight deluxe cabins cater to 16 passengers with a crew of 22 looking after them. The lush interior of the boat sports wall-to-wall 70% recycled wood carved with intricate symbols and depicting Hindu legends. The weathered and well-carved wood gives the feeling of being aboard an ancient pirate ship.

But you won’t be living on salted pork and rum like a pirate. Guests are treated to massages and spa treatments on the sundeck after a sumptuous gourmet feast. The Indonesian archipelago is home to 500 coral species which built up the massive Coral Triangle, which gives divers a unique opportunity for exotic underwater adventures.

The final category of cool goes to the oldest sailboats still afloat. The Star of India is a full-rigged iron windjammer built in 1863 on the Isle of Man, which already sounds about as cool as it gets for boats. Originally named Euterpe, this merchant sailing vessel plied the waters between Great Britain and India and New Zealand. In 1901 the boat was bought by San Francisco fishery, re-rigged as a barque, and re-named the Star of India. The next few decades saw the Star sailing between San Francisco and Alaska for commercial fishing. Over a century later, she floats in the harbor of the San Diego Maritime Museum, but still sees regular sea action from time to time.

The title for the oldest commissioned naval vessel still afloat goes to the USS Constitution, a wooden-hulled, three-masted heavy frigate with 44 guns. The Constitution was built in Boston in 1794 for the U.S. Navy, and named by George Washington after the famous U.S. document of the same name. Ships of this era had a service life expectancy of only 10-15 years, owing largely to being beaten and bashed about in battles and skirmishes, most notably in the War of 1812. During one of the deciding battles of that war, a British ship fired several times at the Constitution, and the cannonballs bounced off her hull. From that moment on, the Constitution was nicknamed ‘Old Ironsides.’ And this is the coolest name for a boat in history.

Old Ironsides still floats in Boston Harbor, and the other cool ships on this list are either sailing the high seas or moored in exotic ports, waiting to carry new generations of sailors along on new ocean adventures.