Superheroes have been flying high on the silver screen for more than a decade now. Looking at the box office, it doesn’t seem like they are going to fade away any time soon. Whether it’s Marvel’s Iron Man, Thor or Spider-Man or DC Comic’s Superman or Batman, they are still pulling in crowds. But, with the success of DC’s Wonder Woman and Marvel’s upcoming Captain Marvel, things are likely to go in a new direction. Let’s take a look at Marvel and the future of comic books in films.

The Arrival of the Superheroes

Green Lantern made his debut in 1959. The Hulk, Spider-Man, and Thor all appeared in 1962. Ironman came a year later. Daredevil came a year after Ironman. The Avengers formed in 1963. Black Panther arrived three years after that. Guardians of the Galaxy first appeared in 1969. Deadpool debuted in 1991.

In between, dozens of comic book superheroes came, became popular for a short time, and then faded away. As movie makers search for new superheroes, some of them may yet make a comeback.

There have been superhero movies in the past

Superhero movies based on comic books are not a new phenomenon. They have been around since as early as the 1940s. Hollywood made the first Batman film in 1943. Captain America made his film debut a year later. Superman joined the bandwagon in 1948. There were superhero movies made sporadically in the subsequent decades.

The period between the 1970s and 1990s was the time when superheroes first made their mark on the silver screen. Superman and Batman dominated this period. All four Superman films starring Christopher Reeve became major box office hits. So, did the three Batman films, as well as several other films featuring a slew of other superheroes.

But, superhero movies were never the incredible box office phenomenon that they are today. They were mostly made for children and adults paid scant attention to them.

The Rise of the Superhero Movies 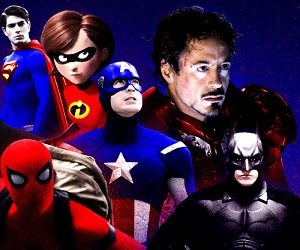 There were two superhero trilogies that really brought superheroes into the mainstream. They were the Spiderman trilogy (2002 to 2007) and The Dark Knight trilogy (2005 to 2012). The former is set in the Marvel Comics Universe and the latter in the DC Comics Universe. Both series raked in more than a billion dollars at the worldwide box office. Riding high on their success, Disney’s Marvel Studios dug out Ironman and Captain America from the closet. The success of the Ironman films turned a down-and-out Robert Downey Jr. into the biggest movie star in the world. Captain America made struggling actor Chris Evans a major film star. Not to be outdone, DC Comics gave Superman a new lease of life in 2013. Man of Steel made Henry Cavill, an unknown British actor, an international star.

To satisfy the audience’s growing appetite for superheroes, Marvel came up with The Avengers and DC came up with The Justice League. Both have an ensemble of superheroes from their respective universes. The last of the Avenger movies, Infinity War, grossed more than $2 billion at the box office. Altogether, superhero movies have made more money than all the other movies combined.

The blockbuster success of these movies set the tone for the next decade. Starting in 2008, superhero movies came thick and fast and there was never any lack of audience.

Reasons for the Success of Superhero Movies

Movie and business analysts give three main reasons for the astounding success of superhero movies. The first is the economic recession of 2008. Many people lost their jobs and homes and suddenly life took a turn for the worse. To escape from their grim realities, people turned to a world of escapism where the hero always wins. Hollywood cleverly gave them just what they wanted to see.

Another reason given for the success of comic book superhero movies is the coming of age of special effects. Development of computer-generated imaging (CGI) made it possible to do things that were not possible two decades ago. Want to show Thor zooming into the blue sky faster than the speed of sound? Just make the actor stand in front of a green screen and CGI will do the rest. Although they know it’s just special effects, they are so realistic the audience thinks it is actually happening. Today’s CGI can produce action scenes so believable that studios do not need any lifelike models.

The third reason is the age of the audience. Today’s superhero movies are made for adults who grew up on a steady diet of superhero comic books. To these adults, known as Generation X and Millennials, superheroes are an integral part of modern culture. When a studio releases a movie featuring their favorite superhero, they make a beeline for the theater without any hesitation.

Thus, the last decade has seen the resurrection of superheroes, such as Thor, Ant-Man, Green Lantern, Deadpool, and Wonder Woman. Each of them has done wonders at the global box office and has become a household name. Superheroes have become so successful that people know them more than real Hollywood stars.

The arrival of the female superheroes

While there is no dearth of female superheroes, they were mostly relegated to supporting roles until recently. Wonder Woman, released in 2017, changed all that. Starring Israeli actress Gal Gadot, the film grossed more than $821 million. It became one of the biggest blockbusters of the year. The film’s success proved that female superheroes can draw as big an audience as male superheroes.

To capitalize on this success, Warner Bros, which produces DC Universe movies, has announced “Wonder Woman: 1984.” Taking a leaf from DC’s success, Marvel began working on its own female superhero movie. Captain Marvel, starring Brie Larson, it is set in the Marvel Universe. It will be one of the most anticipated superhero movies of 2019.

The success of these films is likely to set the tone for the next decade. If they are as successful as expected, you can anticipate the likes of Catwoman and Electra making a huge comeback.

But, filmmakers have to adapt to the audiences’ changing tastes. While some people have begun talking about superhero fatigue, studios are looking at ways to keep the audience interested. They will dig into the past and revive forgotten superheroes that are likely to become major box office draws. Studios will bring some characters that have languished in the background and give them major roles.