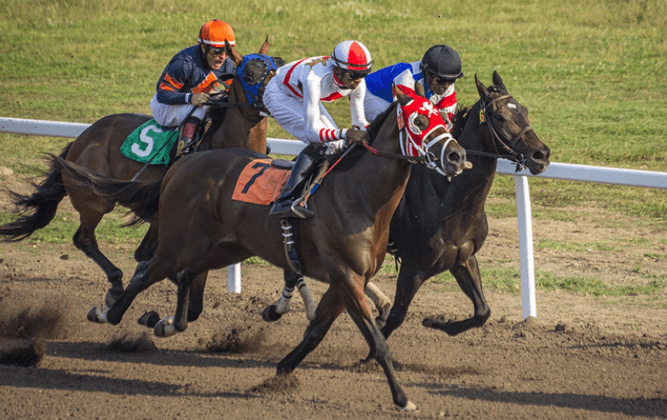 The United States has had a horse racing addiction for a while. The first racetrack appeared in Massachusetts more than 350 years ago. That is a long time for people to become attached to the sport.

In the long history of American horse racing, there have been many memorable races. Here are our picks for the Top 10 most memorable horse races in the United States.

There was not a hint of Triple Crown excitement in the 2016 Belmont Stakes. No horse had won both the Kentucky Derby and the Preakness Stakes before the Belmont that year. There were two favorites among the horses that day, Exaggerator and Stradivari. Exaggerator won the Preakness three weeks earlier. Stradivari finished fourth. The Kentucky Derby winner Nyquist was not entered in the Belmont, as he lost the Preakness to Exaggerator. Exaggerator was the favorite to win. The horse, Creator, started at the back of the pack and stayed there through half the race. However, down the final stretch, Creator sprinted past Destin and won by a nose in a photo finish. Many consider the race to be one of the greatest sprints in Belmont history. The 148th Belmont was only the fourth photo finish ever for the race.

As with the 148th Belmont 14 years later, the 134th Belmont was also an upset. This race had the potential for a Triple Crown victory for the first time in 24 years. War Emblem was widely expected to win, as he had won both the Kentucky Derby and the Preakness. However, the stallion stumbled out of the gate at the start. And, that meant he had no chance to catch up. War Emblem finished eighth overall. The longshot horse, Sarava, trailed for much of the race. In the end, Sarava was able to run down Medaglia d’Oro and win. Sarava is the biggest longshot horse at 70-1 odds to win. Players who risked a $2 bet on the horse got a return of $142.50. The exacta bet netted winners $2,500. The trifecta bet was worth $25,000 and the superfecta was worth $145,000.

Canonero II, the Derby winner in 1971, was a huge longshot. Born in Kentucky, Canonero II sold at auction for $1,200 and went to Venezuela to race. He was not a very successful runner. In fact, he placed third in a Venezuelan stakes race with only a $3,500 purse. Canonero II received huge odds in the Derby. He began the race in 18th place. However, he crashed through the field and won the Derby by 3.5 lengths. Canonero II also won the Preakness that year. He couldn’t duplicate this success for the last leg of the Triple Crown at Belmont. However, experts say his come-from-behind victory is one of the best in Derby history.

There’s a reason why the Belmont Stakes is so prominent on this list. It is the last leg of the Triple Crown. At 1.5 miles, it is also the longest race. Many people watch the Belmont Stakes. Often potential Triple Crown horses can win the Derby and the Preakness but have trouble with the Belmont. The length and the stress of the race have taken out many potential winners. In 1989, Sunday Silence won both the Kentucky Derby and the Preakness, with Easy Goer coming in second in both. However, in the Belmont, legendary jockey Pat Day finally caught a break. He was able to get Easy Goer on the outside, and the horse ran the second-fastest Belmont ever.

Many people believe the Breeder’s Cup Classic is better than any Triple Crown race. It is a very intense and competitive race. It features horses from all over the world. Arcangue, a French-bred horse named after a town along the border with France and Spain, was a 133-1 longshot. He had never raced on dirt tracks before — and had minimal success on grass tracks. Arcangue was trailing the favorite, Bertrando, for much of the race. In the stretch, Arcangue beat out Betrando to win by a length. Some experts consider the 1993 Breeder’s Cup Classic as the greatest upset in racing history.

Called the second greatest race in history, there were only two horses that had a shot to win. The favorite, Affirmed, had already won the Kentucky Derby and the Preakness that year. Alydar lost by a nose in both races. Racing experts believed that if Alydar had a shot to win a leg of the Triple Crown, it was at the Belmont. Alydar and Affirmed left the starting gate and sprinted the 1.5 miles to the finish. No other horse was even close to the lead pair. Again, Affirmed won by a nose. Alydar remains the only horse in Triple Crown history to come in second all three races.

This race is tops on many lists. It was not a close race. Secretariat beat the closest competitor by 31 lengths. He ran the fastest time ever at the Belmont. Not only does Secretariat hold the fastest time at Belmont, but at the Derby and the Preakness as well. There is no question Secretariat was one of the greatest racehorses ever to race in the United States.