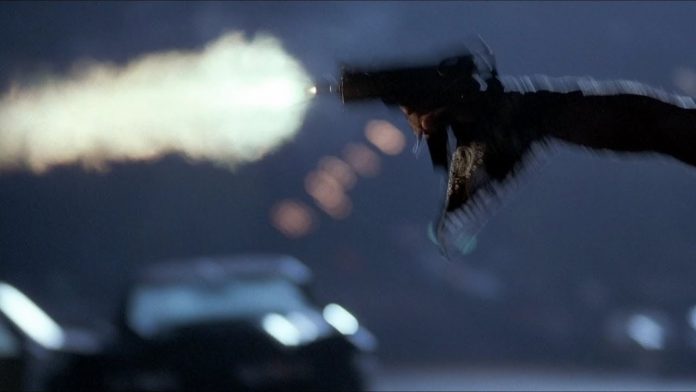 Gun violence is nothing new in America, and drive-by shootings are just a faster way to attack a higher number of people. From the infamous drive-by shooting that killed rapper Tupac Shakur in Las Vegas to a recent spike in gun violence in Sin City, just how safe is it to gamble there these days?

The odds of being involved in a drive-by shooting in Vegas are pretty low, actually, but there are certain days, neighborhoods, and situations that may increase the likelihood of a drive-by shooting. Knowing the odds and taking steps to be prepared in the case of a sudden spray of bullets from a moving car will help you dodge the proverbial bullet.

Before there were cars, determined individuals concerned with shooting and getting away simultaneously used horses. In fact, the first person known to use this mobile murder method was a Ukrainian named Nestor Makkno.

A commander of the Revolutionary Insurrectionary Army of Ukraine, Makhno combined a horse and carriage with a machine gun in 1918 to quickly spray targets in groups then flee before anyone could fire back. With the invention of cars, this sinister guerilla warfare tactic evolved over the next century to become the preferred method of killing by street gangs in America.

There is one thing these two methods of speedy shooting had in common other than a difference in horsepower: inaccuracy. Combining a gun with a high fire rate with a car with a high motion rate may seem like a brilliant idea until physics rears its ugly head.

Bouncing horses and speeding cars do not allow for aiming accuracy, and machine guns are notoriously inaccurate since almost no precision aiming is involved. This is why so many innocent bystanders are harmed in drive-by shootings. 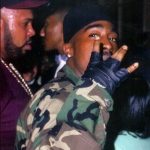 The most famous drive-by shooting in Las Vegas took place on September 7, 1996. Legendary rapper Tupac Shakur was visiting Las Vegas to celebrate a business associate’s birthday. After attending a boxing match between Mike Tyson and Bruce Seldon at the MGM Grand, Tupac left his hotel in a black BMW sedan and joined a convoy of colleagues and fans.

Just after 11:15 PM, a white Cadillac pulled up beside Tupac’s car at a stop light, rapidly fired a hail of bullets into the car, and sped away. Tupac was shot multiple times and was taken to a nearby hospital, where he later died from his wounds.

The assassin was never found, and nobody was charged in the case. However, many assume that Tupac was caught up in the infamous East Coast – West Coast rap rivalry, which resulted in multiple shootings of rappers on both coasts, including Biggie Smalls, aka Notorious B.I.G.

Tupac is considered one of the greatest rappers of all time, and the ‘ghetto poet’ elevated hip hop music from a simple street fad to a global phenomenon. Tupac Shakur was 25 years old when he was killed in a drive-by shooting in Las Vegas.

The recent spike in gun violence and drive-by shootings in Las Vegas have been attributed to out-of-town gangs visiting Vegas, according to local law enforcement agencies. Police officials also cite COVID-19 lockdowns for attributing to stress and pressure which can lead to violent outbursts.

It’s uncertain why Vegas has recently become a magnet for mobile murder, but some suggest the flat, straight Strip makes for an easy cruise and a fast getaway. Or perhaps it’s the flashy, high roller lifestyle that attracts gang members, who pride themselves on their fat bankrolls and flashy cars.

What Are the Odds?

The good news is that drive-by shootings are not as common in Las Vegas as in California. During the bi-coastal rap rivalry, drive-by shootings escalated to the point that Los Angeles, home to most of the West Coast rappers, was the drive-by capital of the world.

Las Vegas doesn’t even make it to the top 5 list for drive-by shootings. However, it’s good to point out some stats behind the shootings, just to get an idea of the odds of being involved in a drive-by. 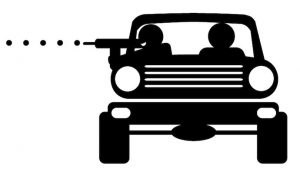 The Las Vegas Strip actually has a lower number of drive-by shootings than other parts of Vegas. Located in southern Vegas in a town called Paradise, the glamorous Strip is far from the seedier side of town. More shootings occur in Downtown Vegas or North Vegas.

The laws of physics are in your favor. Remember, shaky, speeding cars plus vibrating machine guns equals terrible aim. So, the likelihood of dying or being hit at all are slim to none.

Out of the 88 drive-bys in Vegas, 29 of them resulted in fatalities, 38 caused injuries, and 20 shootings hit nothing but air. This results in a 33% mortality rate if the bullets begin flying. A 66% chance of survival is the result.

It’s not good news if you’re a male in Vegas these days; 25 males were killed in a drive-by shooting compared to only 6 females. Also, youth seems to draw the heaviest fire, with the average age of a drive-by victim being around 31.

In Las Vegas, being a Hispanic seems to weigh heavily into the odds of being killed in a drive-by. Of the total number of drive-by fatalities, 12 of them were Hispanic, compared to only 4 fatalities each among Blacks and Caucasians.

Females have the lowest odds of being killed in a drive-by, and ethnicity plays no part. Two women died from each ethnic group.

The majority of drive-by shootings in Vegas take place over the weekend. This is when most of the tourists hit Sin City and frequent the casinos, bars, and clubs. And nighttime is the right time to party hearty.

Unfortunately, most drive-by shooting occur from 10 PM to 7 AM, so aim for the early bird specials and avoid the wee hours of the evening. Not surprisingly, summer seems to see a spike in shootings, with things calming through autumn.

If you live near a lockdown region, the pandemic may just save you from a drive-by shooting. Being on lockdown means you probably won’t be on the streets of Vegas.

That being said, you can be cautious without giving in to fear. After all, the odds of being killed in a drive-by shooting in Vegas are slim to none, when you factor everything into the equation.

But if you really want to play it safe, avoid the Vegas casinos and try your luck at the best online casinos. Your odds of winning a jackpot are much higher than being killed in a drive-by, and online casinos are absolutely 100% drive-by shooting free.