Let’s face it, while many celebrity marriages might at first seem to be made in heaven, oh so many end up going straight to hell. Life in the spotlight is no easy thang. Add to that the burden of raising children, juggling multiple film and TV shoots, the constant pressure to always look perfect, being hounded by paparazzi from the second you step out of the house in the morning until you draw the blinds at home that night, and even the strongest marriages, will start to feel the strain. 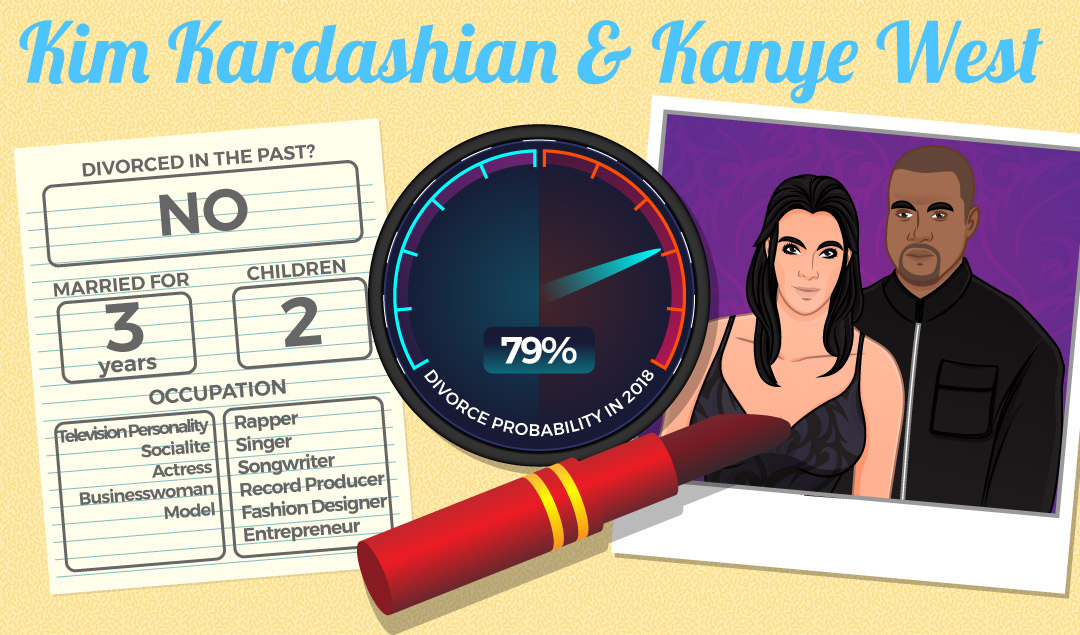 The celebrity marriage of socialite Kim Kardashian and rap star and producer Kanye West has seen its fair share of up’s and downs since the two tied the knot back in May 2014. The “Keeping up with the Kardashians” star Kardashian is used to the spotlight, and so is her hubby West, but due to the constant frenzy of media attention that their relationship attracts, many wonder how long this sensational celebrity marriage will last.

For starters, the couple has three kids, and both are highly successful in their endeavors. Kardashian has an estimated net worth of roughly $45 million and has been able to monetize fame better than any other through successful fragrance and cosmetics lines, a television show and an immense social media following. West on the other hand, is widely considered as one of the most successful recording artists and producers of his generation; amassing a huge personal fortune from music tours and his own high-end clothing line (reportedly earning $53 million last year alone).

However, despite their professional successes, many wonder if the strain of the spotlight will prove too much. West recently announced that he was “millions in debt” due to risky business adventures, and the two even took some time off last year in order for West to finish production of a new album. Both have not been without rocky relationships in the past, Kardashian is even once divorced. Odds are not looking good for the two as 2018 kicks off. 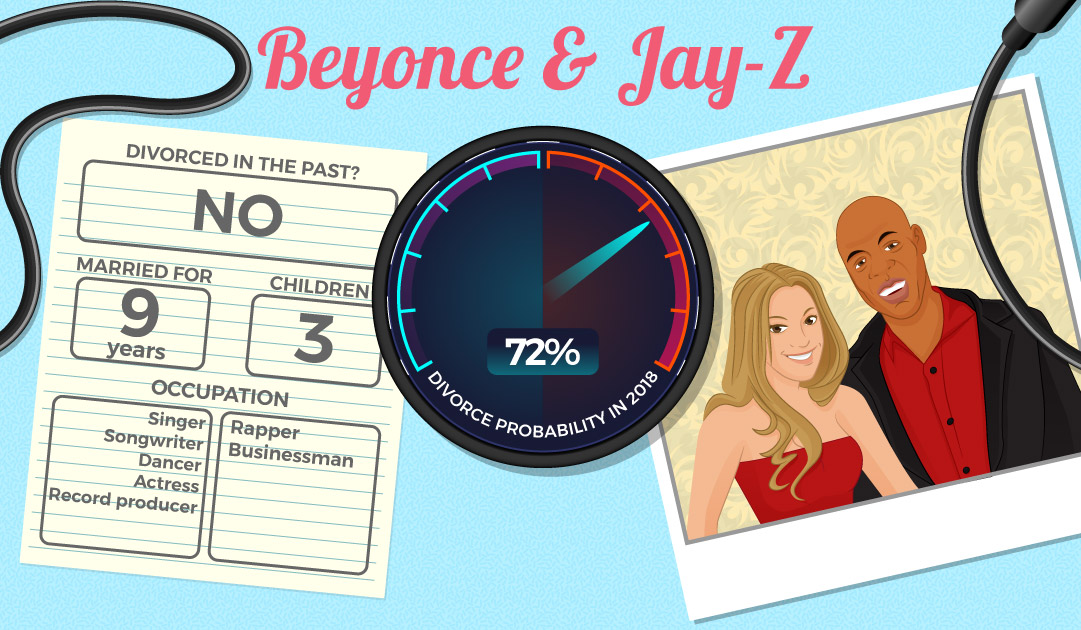 Undeniably, at the top of the music Everest is the superstar couple of rap legend Jay-Z and R&B diva Beyoncé; the two met in 2000, and have been married since 2008. Though often avoiding talking about their relationship publicly, the two have been under constant media scrutiny ever since joining forces. In addition, their astronomical success in music have only further complicated avoiding the public eye.

Beyoncé first found fame with the musical group “Destiny’s Child” at the turn of the millennium, and after having gone solo she has continued on a meteoric rise of success amassing over $300 million in personal wealth. Jay-Z is no stranger to success either, after numerous music hits through nearly three decades as well as successful business endeavors from clothing lines to real estate and sports teams and record labels, he is worth over $800 million. The couple have three kids, a daughter and two twins born last year.

The biggest hit to their relationship came in 2016, when Beyoncé released the album “Lemonade”, in it she accuses her husband of cheating. This created a media frenzy and was later confirmed by Jay-Z himself. Everyone thought that this would be the demise of their marriage, but they seem to have gotten past their relationship troubles, for now. With 2018 bringing added pressures from their professional lives, many are doubting that the two hang in there for the long term. 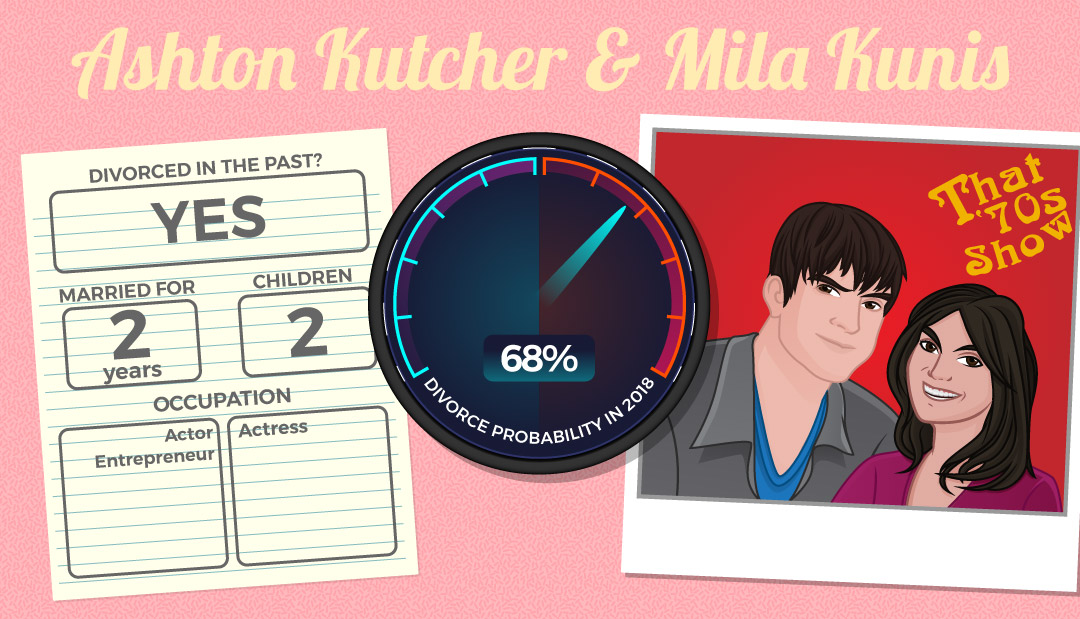 It wasn’t until last year that actor and director Ashton Kutcher opened up about how his relationship with actress Mila Kunis evolved over the years. They met, Kutcher told radio star Howard Stern, on the set of That 70s Show, when she was a tender 14 years-old.

The relationship itself didn’t take off until many years later. They had stayed friends since co-starring on That 70s Show and it wasn’t until after his divorce from Demi Moore in 2011 that they hooked up. That same year, Kunis broke with Home Alone star Macaulay Culkin, whom she had been dating since 2002.

Initially the relationship was casual, similar to the films she and Kutcher had starred in such as No Strings Attached and Friends with Benefits. Kunis is famous for saying, “If we had just paid attention to those movies we should have known shit like this does not work out in real life.”

Kunis explained that in the early days they both agreed that they’d date but the idea was they were never going to get married. Then one day it just happened, and they agreed “like, tomorrow let’s get married…” Isn’t that sweet.

They became engaged in 2014 and she gave birth to their daughter Wyatt that same year. The two were finally married in a top-secret ceremony in 2015, with Kunis giving birth to a second child, a son named Dimitri Portwood, in November 2016.

Things since then, however, have been no bed of roses. The couple announced they were separating last spring, after fighting over everything from children to their careers and co-stars. Needless to say, based on our analysis, while there’s always still the possibility of reconciliation, the odds of divorce in 2018 are extremely high, at 68%. 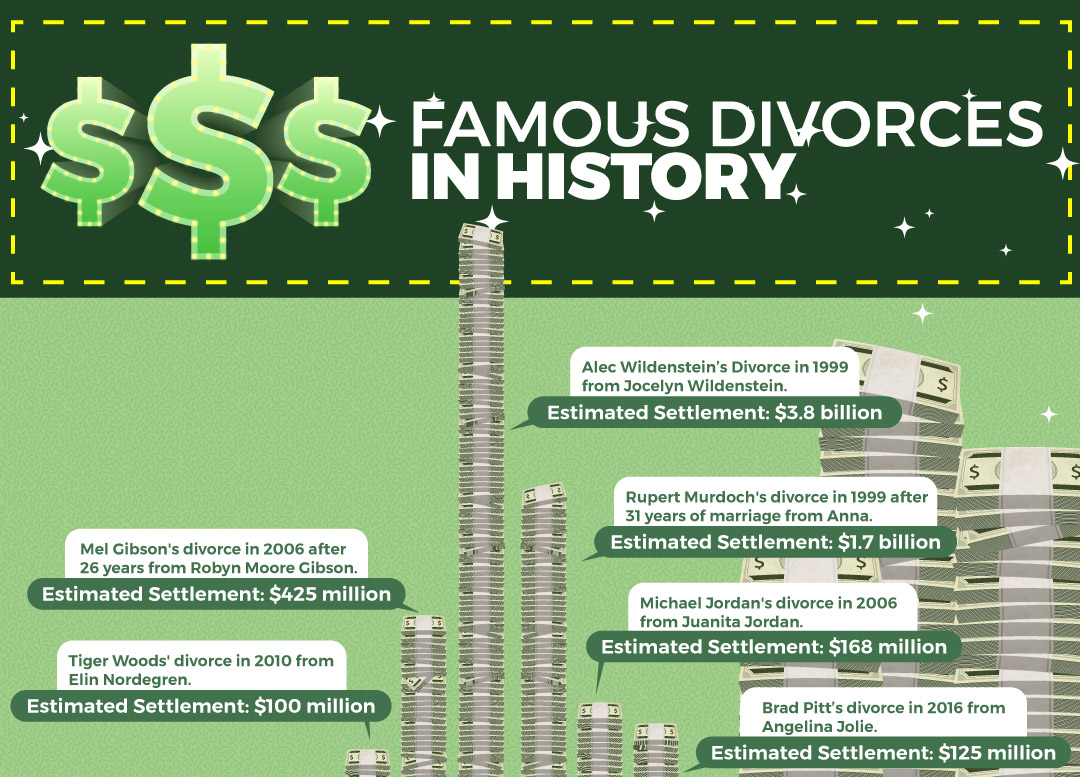 Divorce has never been cheap. And when it comes the mega millions celebrities accrue, there’s a lot at stake when it’s time to divide up that mighty big pie. Above we take a quick look at some of the most expensive celebrity divorce settlements of all time. Whether you’re an A-list celebrity, a major sports star or a billionaire media mogul, rest assured that when it’s time to split, you will feel the pain, all the more so as your ex’s lawyer laughs with her arm in arm all the way to the bank. But hey, no pain no gain right? 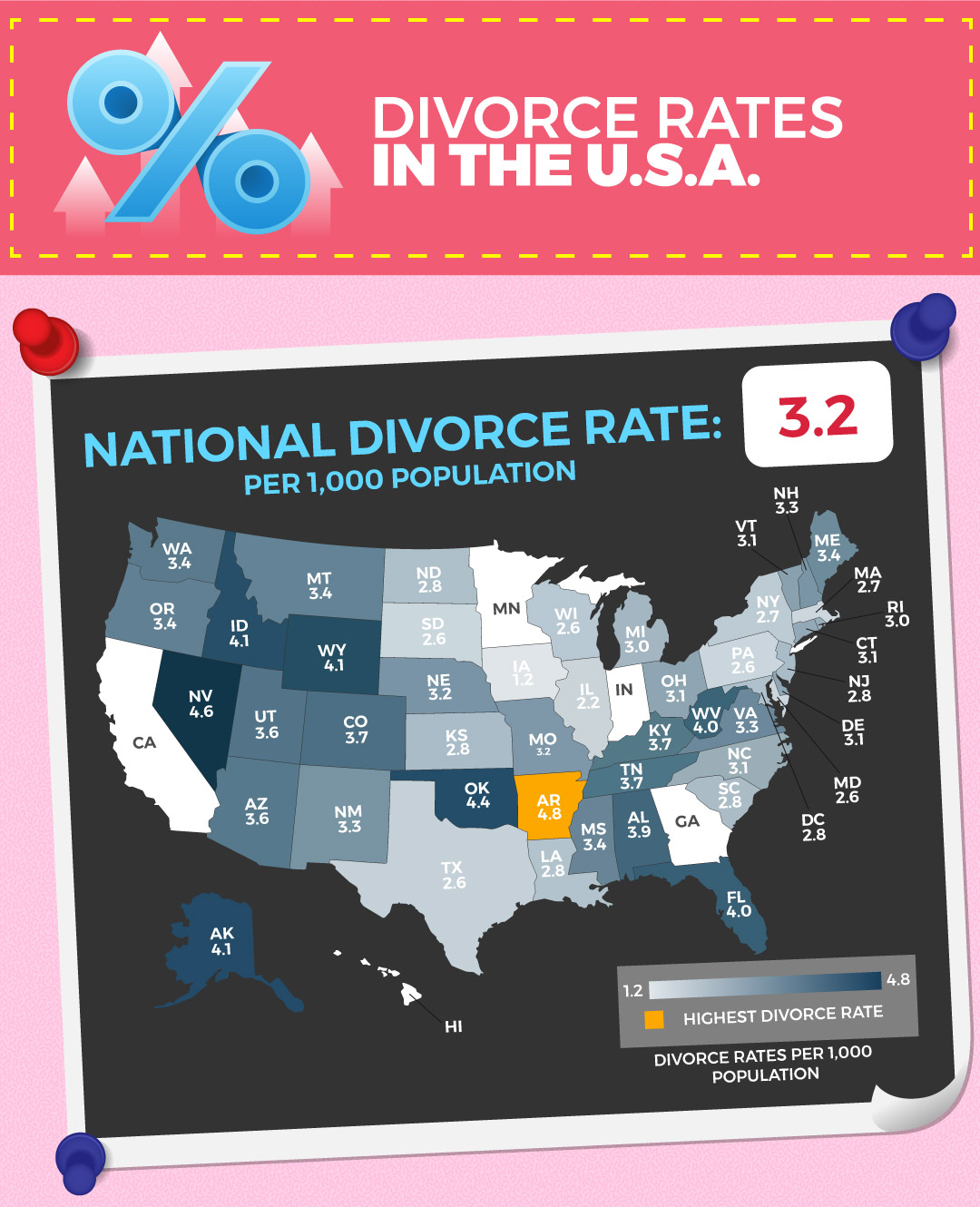 America is known as the New World. It’s a young country by global standards and, as even a quick glance at the day’s newspaper will show you, still suffering from a lot of growing pains. Americans are born and bred to be independent, a factor, many experts say, that leads to higher divorce rates.

Furthermore, Americans tend to be stubborn over patient. The immediate gratification society fostered by rampant American consumerism leads people to a “my way or the highway mentality” combined with the “I want it now” mindset, a recipe for the expediency of divorce. Add to that the fact that in today’s US, for the most part, there is little stigma associated with divorce, kind of like trading in your old car for a newer model, and the numbers above will start to make sense. 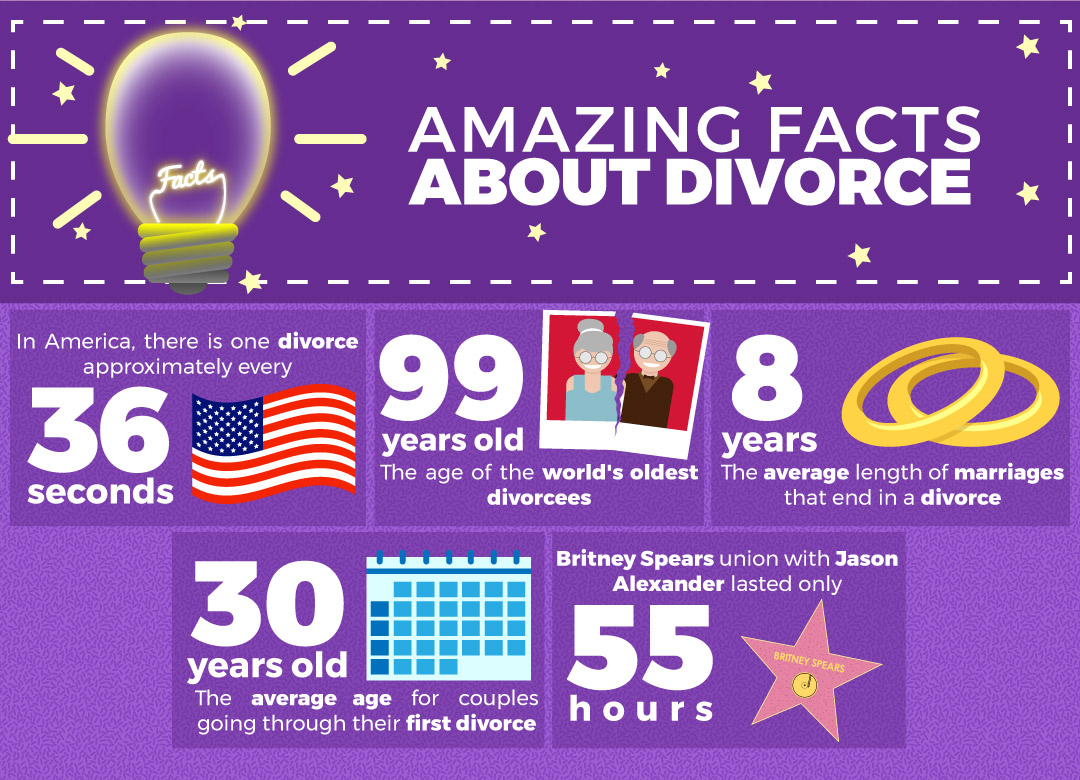 America is known as the New World. It’s a young country by global standards and, as even a quick glance at the day’s newspaper will show you, still suffering from a lot of growing pains. Americans are born and bred to be independent, a factor, many experts say, that leads to higher divorce rates.

Furthermore, Americans tend to be stubborn over patient. The immediate gratification society fostered by rampant American consumerism leads people to a “my way or the highway mentality” combined with the “I want it now” mindset, a recipe for the expediency of divorce. Add to that the fact that in today’s US, for the most part, there is little stigma associated with divorce, kind of like trading in your old car for a newer model, and the numbers above will start to make sense.

At the end of the day, marriage, like so much of life is a gamble. Sure, there’s a chance of what started out as a romantic fling turning into life “happily ever after”. But there’s fair odds as well of going bust. Before you head out on that great adventure called marriage, or even if you’re in the middle of it, keep in mind that, if you select the right game at the right casino, like for example blackjack, while the odds are slightly against you, playing it wise can lead to amazing wins. So remember, when going for the gold, it’s important to play the odds well.

To find out who, in the pantheon of celebrity marriages is most likely for a fall in 2018, we took a survey of 1,000 ordinary, celebrity loving Americans and asked them to name the three celebrity couples they thought were most likely to hit the rocks in 2018. To add a bit of depth to our research, we factored in the number of “troubled relationship” rumors about each couple, whether they have been divorced before, how long they have been married and the number of kids they have. We then quantified each of these data sets and, using probability theory, came up with the percent chance our leading celebrity couples were likely to end up divorced sometime in 2018.

If you’re interested in sharing this full infographic, we encourage you to copy and paste the following code on your site. We just ask that you attribute USA Online Casino in your coverage and provide a link to this page so that your audience can learn more about the project.