Playboy slot games are vying for your attention, hoping to become your playmate of choice. But, which one will it be? Keep reading to find out more about the wild and wonderful world of Playboy slot games, complete with beautiful ladies and huge payouts to keep you coming back again and again.

The Playboy Slot Machine has a total of five reels and offers 243 different ways to get payouts. Images of Playboy playmates encourage you, offering up special bonuses and free spins. Every time you have a winning combo, you up your chances of getting great bonuses, such as an invitation to become a member of the Playboy Club.

This game is fun to play, because of its over-the-top graphics. Symbols on the screen are all pretty much symbols of lavish luxury, such as extravagant jewelry and expensive premium liquor. Both classy and provocative, the game has a lot in common with Playboy magazine. It is meant to entice but does not offend. Each beautiful Playmate has her own reward. Kimi will multiply your winnings by five and award you with a 10 free spins.

Sofia comes with the Running Wilds element and gives you 15 free spins. Running Wilds grows the Wild Stack by one Wild for each reel during each of your free spins. Ashley is the babe who will reward you with 20 free spins that include Rolling Reels, where players have the chance of getting more than one consecutive win. And Jillian is the hostess with the mostest, with 25 free spins and the Wild Night Feature. The feature is totally random and turns as many as five reels wild.

The game has a feature that tracks your winnings and unlocks each symbol as your paytable changes. Players earn these achievements as payouts for the symbols are completed. Remember, you can gain entry inside the Playboy Club with three, four or five scatter symbols. Playboy Wild doubles a win. Score! 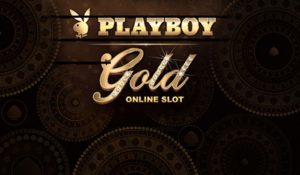 Maybe you think you have seen all that Playboy Slots have to offer. But, alas, there is yet more that has been revealed. The bunnies return to the screen in nonstop, sexy action in Playboy Gold. The game has six reels with tons of features specially designed just for you. Some of the most infamous girls, such as gorgeous Playmates Audrey and Raquel, are the hostesses. When the game was first rolled out earlier this year, it was first made available at Jackpot City and Casumo Casino. At Casumo, the focus was on free spins, for the most part. But, at Jackpot City, new players received a package for as much as $1,600 in bonuses that could be used to play any game on the Playboy Platform.

Additional features include the Wheel Bonus, Jumbo Blocks, and Match Bonus games. Players can win instantly by getting a full Jumbo Block in the main game. Prizes include cash awards, respins, and multipliers. The Jumbo Block that triggered the win expands to fill the middle reels during respins, so players have ample opportunity to nab bigger and bigger rewards. For the Wheel Bonus, Playboy bunny Raquel appears on screen to provide a little eye candy and assist you in your spin for instantaneous wins, activating the match bonus or even rewarding you with a golden key, which entitles you to more free spins!

During the feature that offers free spins, players can unlock as many as 10 freebies. In comparison, Jumbo Block will land on every spin, guaranteed. For the Match Bonus in Playboy Gold, you’ll be able to accumulate rewards and, then, pick your way through to a 10-times multiplier. This is accomplished by searching for the Playmates who are a match but hidden away in the back of the golden-hued card deck. Sounds like a golden opportunity in the Playboy universe of fine cigars, top-shelf whiskey, and diamond glitter! 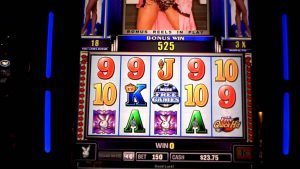 Unlike other games, you can’t play Playboy Platinum at any online casino because this game is exclusively played on specially designated video cabinets inside high-end brick-and-mortar casinos. What’s so special about this game?

It offers a progressive jackpot with a chance to hit it really big. The game features big screens that are horizontal, like most machines in land-based casinos. These screens have tons of options for betting and many side effects. Of course, world-famous Playboy Playmates adorn the top of the screen, but the bottom of the screen is where the action is, with five reels and three rows containing symbols. Playboy Platinum has 30 fixed paylines and players can bet between one and five coins per each line. The maximum bet is 150 coins. At its highest point, the nonprogressive jackpot is 5,000-times the bet. That is quite a payoff! 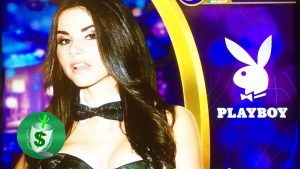 Maybe you are more the type who prefers a quick hit. Well, then, Playboy Slots Midnight Diamonds has you covered. This game is a classic concept with a twist of modern flair. You might think it is kind of retro when you first see it. But, then you realize it is something entirely different. There are three rows of symbols, with bells, bars, and, um, cherries in five reels. Going along with the cherry theme, the entire game is framed by a reddish cityscape, replete with roving searchlights perched on top. Sounds aesthetically pleasing enough, but gamers will experience the wow factor when they hit the spin button.

Midnight Diamonds is, in our opinion, superior to the other equivalent retro games. The sound of the spin features a drum and jazz bass. How classic. Special items include a feature that is on-reel and can result in extra wilds. Free spins or a cash bonus can also be won in a breakout wheel game. There’s a total of 30 nonadjustable (fixed) win lines. Players can freely adjust their coin size from 1 cent for 30 cents spins to $15 for $450 spins.

There are also bonus symbols and wilds, along with the usual symbols that pay. They will be easy to recognize because they are squares that contain the word “wild,” and are often stacked and may cover three positions within a reel. Get just one of the wild stacks on reel one, three or five, and a special feature could pop up even more random wilds before wins are added up. Simply put, this feature of Midnight Diamonds means a seemingly ordinary spin can turn into major winnings and is one of the reasons why we love this game so much.

Keep in mind that these symbols, which are pictures as animated diamonds containing the keyword bonus, are only on reels one, three, and five. Get all three and you’ll be going on to the wheel feature. Your payouts list according to the total you are betting. Diamonds, wilds or a combination of them will yield 20 times that particular bet if you hit five of a kind. The silver 7s will yield 15 times, which may seem insignificant. But, remember, the wild symbols in a stack indicate that you’re going to get several simultaneously, which is a quick hit indeed. Game on.