Even though America is home to some of the best food in the world, whether it be in the form of gourmet, A La Carte, or Michelin-starred restaurants, you’ll pay through the roof and beyond for some of these places! But, that doesn’t mean that you can’t find the same quality, amazing flavors, and much more attractive prices in other places too. Many pop-up-style food merchants are renowned for providing equal, and sometimes superior culinary satisfaction from the dishes served up inside their little mobile kitchens. So, grab your trusty knife, fork and a big pile of napkins, because we’re about to embark on adventure through some of the most popular and mouth-watering food trucks the states have to offer! 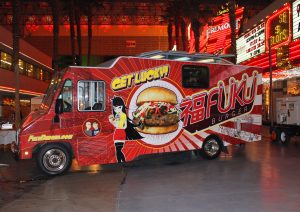 What’s probably worth mentioning first, is the fact that this rather exotic food truck is actually a twist on the last name of the co-owner, Colin Fukunga, and not the first thing that probably comes to mind! Aside from the stand-out name and crazy artwork printed all over it, they are primarily renowned for flipping up a very tasty infusion of Japanese and American-style burgers, with oriental toppings such as pickled red ginger, wasabi mayonnaise and their famous secret “crack sauce.” We can only imagine what goes into a relish like this, but we hear it’s highly addictive, and will certainly leave you wanting more. 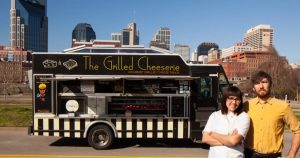 Famous for… Well, you probably guessed it – some of the best molten-hot, gourmet cheese toasties in the whole of the Nashville. Established in 2010, the co-owner of this truck, Crystal De Luna-Bogan, has worked in some of the most top-level, fine-dining restaurants in a multitude of different states, including Napa Rose in California and the Four Seasons Hotel in Beverley Hills. And they sure know what gets people’s stomach’s going, especially when it comes to comfort food such as the beloved grilled cheese. Their menu features items such as the Pimento Mac & Cheese; made with fresh and crispy macaroni, bacon bits, and homemade pimento cheddar, as well as their famous B&B of Tennessee (bacon and buttermilk cheddar cheese). Say cheese! 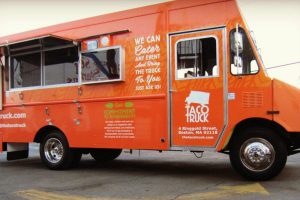 These guys have been running for almost 10 years in the food truck business now, and are still going strong to this day. Owned by friends Jason Scott and Chris Viola, their decision to start a Taco Truck came after the 2 met in Mexico after finishing college. With the help of other chefs from various other regions, they put together a menu that consists of the ultimate Tex-Mex creations, such as the Al Pastor Taco (marinated pork, onion, cilantro, pineapple and fresh green salsa), Aguacate Tacos (black beans, crispy avocado, sesame seeds, pickled onion, tortilla fritas, chipotle sauce), Barbacoa Burrito (braised beef, blacks beans, red rice, onion, cilantro and crema). Their food became so popular over the years, they have now trucks in New York, Connecticut, and Pennsylvania. 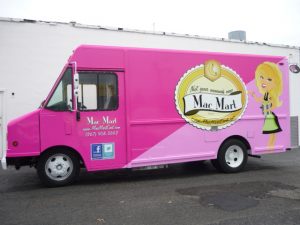 Apart from grilled cheese, what can get better than the warmth and comfort of mac & cheese? Unless you’re lactose intolerant or vegan, it’s always a done winner as far as the world’s population is concerned. That’s why in 2013, on the campus of Drexel University in Philadelphia, owner Marti Leiberman took the motivation to start testing out different takes on one of America’s most popular dishes, and soon after that she launched the Mac Mart Truck. Here you can expect to be served up varieties of cheesy greatness including BBQ in a Bowl (classic macaroni with chunky bits of BBQ chicken, cornbread and BBQ drizzle sauce) Crabby Mac (mac topped with jumbo crabmeat dip, potato chip panko crunch and cream cheese), as well as another favorite mac in a buttery, toasted sandwich topped with a ton of American cheese. Sounds like it could cause a heart attack, but it’d be worth it! 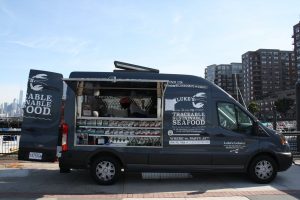 Luke Holden is the mastermind behind Luke’s Lobster Truck. He grew up in Cape Elizabeth in Maine, and was raised by his fisherman father. Luke’s dad was also a lobster processor, and he and his son spent many days together down at the docks in his local town. When Luke went off to university later on in life, he discovered there wasn’t anywhere in New York to get his favorite lobster roll. So in 2009, he came up with the idea to buy a van and start selling fresh lobsters. Today Luke has 20 of these shacks in over 11 different cities in the US serving up everything from the Lobster Grilled Cheese Sandwich to Chilled Lobster-Tail Platters with butter and cocktail sauce. Yum! 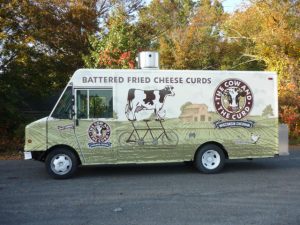 Philadelphia may be deemed as the capital of cheese steaks, but the Cow & Curd food truck is serving up way more than your average Philly-topped sub. It all began when ex-teacher and Founder Robert Mitchell was in the helping out with a friend’s food stand with his wife. Although he enjoyed the food that was being dished up, he thought there was scope for more exciting twists and concepts, and when his wife suggested cheese curds – it wasn’t long before the idea for batter-fried cheese curds were born! Each serving comes with 3 different dipping sauces: chipotle ranch, sriracha mayo, and smoky ketchup. 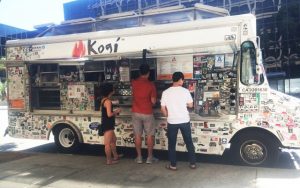 The owner of this LA-based food truck is Culinary Institute of America graduate – Roy Choi. He has been in the business since 2008, when he decided to launch a feast-mobile that would hand out Korean-and-Mexican-infused deliciousness. There are a total of 4 Kogi BBQ trucks dotted around Los Angeles, as well as several sit-down restaurants cooking up the best Asia-themed rice bowls and juicy flame-grilled cuisine. Some of Kogi’s exquisite productions include the chubby pork bell bowl (kochujang-laquered pork, fried egg, greens, pickles, cotija and peanuts), the sour cream hen house (marinated grilled chicken, a fried egg, greens, chilies, sour cream, and toasted sesame seeds). 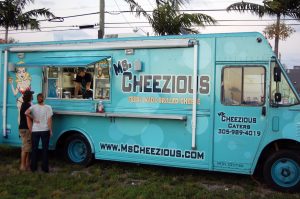 Miami-based joint Ms. Cheezious is known for cooking up some of the most devious, belly-pleasing delights. Formed in 2010 by husband and wife Brian & Fatima Mullins, their unique takes on grilled cheese sandwiches include: crispy bacon and blue cheese with green onion on sourdough bread, as well as BBQ pulled pork melt with sharp cheddar cheese on Texas toast. Dessert is where things get a little more interesting though! After chomping down on one of their famous grilled cheese, get ready to indulge your palette even further with a mountain of roasted marshmallows, salted chocolate hazelnut spread and graham cracker crumble sourdough bread. Not sure about you, but our stomachs are rumbling at the thought! 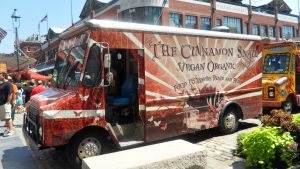 This food truck officially cranked up its engine and oven in 2010, and is known for providing an extensive hot and cold selection of the tastiest, freshest vegan lunch edibles in the very heart of the Big Apple. Owner Chef Adam Sobel has worked in various meat-free restaurants for over 10 years, and initially came up with the idea for the Cinnamon Snail when he wanted to expand people’s perception of vegan food. His menu consists of delicious, open-faced Korean BBQ sandwiches, vegan bowls and specialty burgers, and over 30 different types of vegan donuts and pastries! We think it’s safe to say Sobel’s objective was successful, as the truck is in high demand this year, and expected to be popping up in different locations in New Jersey as well as its base in New York. 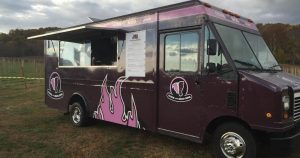 The Oink & Moo is definitely a meat-eaters dream! Founder & owner Josh Sacks first set about launching his famous truck in 2010. It is said he spent many years exploring different parts of the country, savoring different sauces, meats, and learning new cooking techniques. All of his efforts contribute to his mission of being able to fire up up the best and juiciest mobile BBQ service in New Jersey. The mouth-watering menu consists of pulled-pork sliders, brisket, pulled-chicken and pork tacos, BBQ quesadillas, as well as baby back ribs with coleslaw and homemade cornbread. Not only has the truck won several awards since it started up, they now have another 2 food trucks in Philadelphia, and they offer party catering packages for groups too! We’d definitely have them serve us meaty treats on our birthday that’s for sure.

So there you have it: 10 very succulent food mobiles you may happen to encounter if you visit any of their home states. Obviously, being one of the world’s thriving capitals for all things culinary – there will be thousands of similar mobile food dispensaries that are equally delicious, quirky, and of high quality. You’ll probably save quite a bit of money on restaurants and expensive sit-down dining just by paying some of these a visit too. So, if you do make it to any of the ones in the list, or find any other outstandingly good ones; be sure to send us your recommendations!