Home » USA Online Casino Blog » Scientology – What is it and Why do Hollywood Stars Join?

It seems as if a lot of people these days are joining Scientology. Many people are familiar with the word Scientology, but few people know what it stands for. Not sure what Scientology is or why it appeals to people in Hollywood? Keep reading for more information.

Scientology is not a simple religion to understand. The main tenet of Scientology is that every human being has an unbreakable connection between the mind and the body. Over time, the brain responds to traumas experienced by people throughout their lives. These traumas can happen when someone is a young child, or throughout adulthood. Whenever these traumas occur, they are added to the other traumas experienced. This creates clouds or confusion within the brain, which means that a human being is only able to see a partial reality. They are unable to see the full reality of human experience.

Scientology does not have a theory about God. Scientologists are told they can discover the “truth” about God for themselves. This discovery is made as they rid themselves of trauma and their awareness increases.

The Power of the Human Mind

For Scientologists, the mind can be divided into two parts. The reactive mind is seen as a recorder of pain and emotional trauma. Therefore it is seen as an irrational part of the brain. However, there is also a rational part of the brain called the analytical mind. The reactive mind acts as the storehouse for memories that are associated with trauma, called engrams. Scientologists believe that because engrams are painful and debilitating, they make people move away from their true selves. Hubbard thought some engrams are planted by evil people, and others are accidental. All engrams lead humans to apathy, neurosis, illness, and insanity. However, if the engrams can be cleared through auditing, the human body is able to recover. Examples of diseases caused by engrams include mental illnesses, heart and lung disorders, cancer and epilepsy. Many Scientologists do not believe in doctors or medicine.

Scientologists believe that by clearing the mind, humans can tap into powers and abilities they do not realize they have. This gives humans the potential to be healthier and happier. Hubbard called the analytical mind a perfect computer, ready to make decisions in a split second with correct data.

Scientology believes in levels of humanity. In other words, adults progress through the system as they meet one-on-one with a Scientology counselor or auditor. During counseling sessions, all information shared between the counselor and the believer is recorded. These counseling sessions are very much like confession in Christians (such as Catholics). However, in Scientology, no forgiveness is offered, and no advice is given. The role of the auditor is to help individuals discover their problems and free themselves of trauma.

The auditors monitor the clearance of past trauma in others using an e-meter. The e-meter is supposed to measure changes in the body’s electrical resistance as the Scientologist holds the electrodes. When the e-meter reads that the charge from the trauma has been dissipated, the person is seen as better. 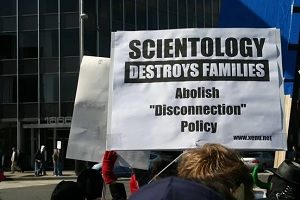 Celebrities embrace Scientology for a couple of reasons. First, Scientology believes that celebrities and other artists operate on a higher level of thinking than other humans. Hubbard believed that actors, singers, writers, and artists are already processing through their past trauma through their art. He believes they should be encouraged to continue to create as part of the levels of Scientology. Second, Scientology actively embraces and seeks out celebrities to promote their religion. Hubbard actively recruited celebrities because he felt their status would be able to draw people to the religion.

Scientology has Celebrity Centers; eight churches where celebrities can go and worship without having to mingle with the common folk. Celebrity Centers are located in Los Angeles, Dusseldorf, Brussels, Florence, Las Vegas, London, Munich, and Nashville. While the public is still welcome in these churches, the emphasis is on welcoming members who are famous.

When a celebrity member is having a hard time the church will rush to their aid. The church provides them with the resources they need to escape public scrutiny. It’s no wonder that celebrities are willing to flock to the religion. It caters to what they need, and understands their need for privacy.