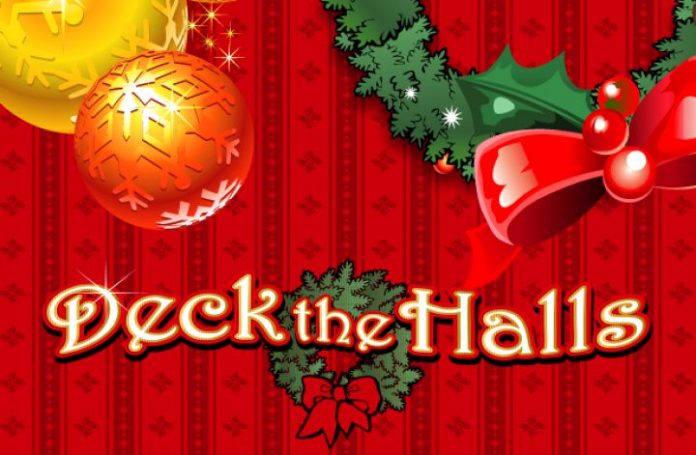 ‘Tis the Christmas season yet again, and online slots players are looking for gifts, spins, bonuses, and cold hard cash under the Christmas tree. This year’s best Christmas slots offer a wild winter wonderland full of snowmen, elves, reindeer, and naughty and nice Santa’s helpers. So park your sled under the nearest mistletoe and pucker up for Lady Luck’s kiss, because these festive online Christmas slots are the best way to deck your halls with fun and fabulous prizes! 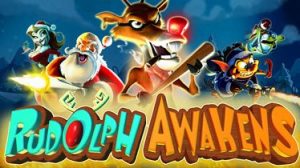 Just in time for Christmas 2019, RTG has released the latest in the Rudolph vs Santa wars series of slot games: Rudolph Awakens. This time, it’s personal. It’s Christmas, and everywhere children are asleep with visions of sugar plums dancing in their heads. Meanwhile, up at the North Pole, there’s a reindeer revolution afoot (or is it ahoof?)!

The elves grew weary of the ‘shorty’ jokes, so they walked off their toy factory jobs. And Rudolph is tired of dragging all those lagging reindeer behind him at Santa’s command. Now Rudolph vows to return Christmas to the reindeer masses.

But Santa’s got billions of presents to deliver in one night, and no cheap labor force. So he crept over his Russian neighbor’s fence, ‘borrowed’ one of his AK-47s, and set off to teach Rudolph and his rebel elves a lesson or two. So let the Battle Royale at the North Pole begin!

Rudolph is extra Wild in this chapter: when he appears on reel 3, he covers the reel and triggers the Free Spins Feature – and 10 free games! He is then frozen in a block of ice by Santa’s pal Jack Frost. He stays frozen while the reels spin up your 10 free games, and if an “Extra Games!” symbol appears on both reels 1 and 5 during a free game, you win 3 extra free games.

Rudolph stays frozen until his flamethrower-sporting elf pal melts him out of the ice. For more of the epic North Pole wars Christmas slots, check out Rudolph’s Revenge, Elf Wars, and Return of the Rudolph. 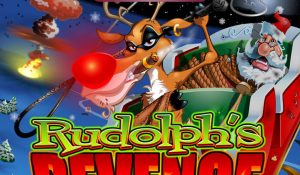 You don’t want to mess with Rudolph. He’s got an ax to grind. And a bat to swing. With his promised Christmas bonus nowhere in sight, he’s set his sights on revenge. Santa’s all tied up and gagged with an apple, the elves are literally on ice, and certain presents contain bombs. This is definitely not a Christmas story for the children.

Rudolph is Wild in more ways than one. When he appears near a row of matches, his nose lights up, he chomps his cigar and taps his bat against his hoof. The other scatter characters also spring to life when they are activated. Santa shakes his head and spits out his apple (but Rudolph stuffs another apple in Santa’s mouth) while snow falls on his bound figure. Ticking gift bombs rattle and detonate bonuses. Line up three gift bombs in a row, the North Pole explodes, and you get seven free spins!

Line up two or more gift bombs in a row for an explosive scatter bonus. With its quirky twist on Christmas, fun animation, 50 pay lines, and ticking gift bombs, Rudolph’s Revenge gives you a lot more bang for the buck.

Return of the Rudolph 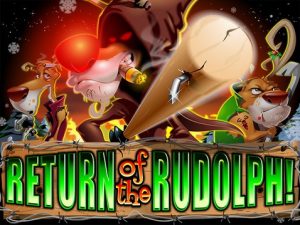 If you can’t get enough of that red-nosed reindeer stuff, Rudolph returns for some more Christmas mayhem! This time, the cigar-chomping, bat-wielding Rudolph gets his hoodie on, and his eyes glow redder than his famous nose. The North Pole is in tatters, with torn presents and torn teddies popping up everywhere. Thugs have gone wild and trashed the place. But Rudolph and Santa team up to fight this thuggish threat. Line up two or more Santa scatters in a row and the character springs to life and shoots flames from his gloves. Get ready to rumble!

Line up three Wild Rudolph pics vertically in the center row to activate his angry animation. Rudolph jumps out and swings his bat, and any adjacent scatters rack up big bonuses. When three thug scatters show up, you pick a thug to activate the Santa Strikes Back feature or the Rudolph’s Revenge feature. Depending on which thug you choose, win multiple bonuses, free spins, and more!

When the Rudolph’s Revenge feature is triggered, you have to find three hiding elves among various hiding places in Santa’s workshop. Find three elves in three picks and you’ll win 50 free spins! The free spins feature can be retriggered nine times during the game. And if you score five thugs, you’ll win the progressive jackpot for a very merry Christmas indeed. 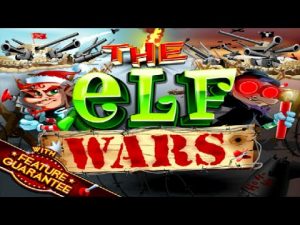 Get ready for some more elfish mischief in the North Pole! Naughty elves light and throw sticks of dynamite, General Rudolph (with his ubiquitous cigar) fires the big guns, and Santa comes running to the rescue in a short-sleeved Robin Hood costume. Check out Santa’s ripped arms! He’s got 2 guns of his own.

A unique feature of this slots game is the guaranteed feature option. A mandatory side bet accompanies your normal wager to ensure that you trigger one of the bonus features during the game. Bonus features include Rudolph’s Revenge, Rudolph’s Rampage, Santa Strikes Back, and Jackpot Spins. Spin a bonus wheel for multipliers or search for hidden elves in Santa’s workshop. Good elves are dressed in green and armed with plastic dart guns, while black-clothed bad elves chuck explosives. This hardly seems fair, but with all of the bonus and features in the game, you’ll be too distracted with winning to care about the outcome of the Elf Wars. 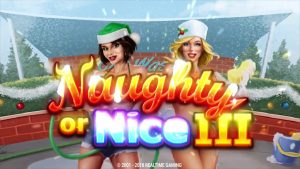 Santa’s saucy helpers, Miss Naughty and Miss Nice are back again this season in Naughty or Nice III. As in previous editions of this exciting RTG game, two scantily-clad lovelies bestow a bounty of bonuses upon you whether or not you’ve been naughty or nice this year. While the ladies appear ill-equipped to deal with too much snow on their skin, there’s plenty of thrilling action and bonus features to keep everyone’s blood warm. A car wash serves as the backdrop (which explains the bikinis in winter).

The game features three reels and 30 fixed pay lines. The Naughty or Nice III logo is a scatter symbol, along with a shirtless Santa, a dog with reindeer antlers, angry Mrs. Claus (she’s just jealous), a box of cash, and a car wash sign. The low-value symbols range from 9 to Ace based on a standard card deck. Two randomly-triggered, progressive jackpots, a seven-free-games bonus, and the Lucky Games feature all add up to a merry sleigh ride indeed.

Game play is simple. Place your bet by selecting the coin size from $0.01 up to $5.00 (click the – or + sign). The bet size is determined by multiplying the coin size by the pay lines (from $0.30 to $150.00). You can skip all the toggling by clicking the Bet Max icon. Once you’ve chosen to bet it all or play it safe, click the Spin button and watch the reels spin.

If you land three or more scatter symbols across the reels, you’ve triggered the Naughty or Nice III bonus, with seven free games to choose from. Line up 5 of a Kind (with or without a Wild) to hit the Mega Bonus Jackpot. You can also select a number of spins and click Auto Play to bypass manual spinning for you.

And if you can’t get enough of Ms. Naughty and Ms. Nice, play Naughty or Nice I and II. Because you can never get enough winter bikini action. 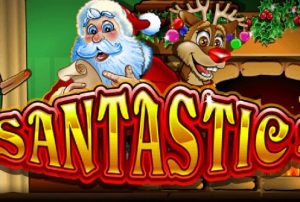 Santa is feeling generous this year, so if you help him deliver his goods all over the snowy village, he promises a Santastic bundle of goodies for you. Spin the simple 3×3 reel grid with five pay lines to score a variety of 3-of-a-kind combinations to win. The seasonal scatter symbols include Santa, snowmen, the North Pole, Rudolph, elves, stockings, candy canes, teddies, and Christmas puddings.

Spin three of the following symbols to get your gifts: Santa himself is worth 100 coins, Rudolph scores 50, Elves 30, the North Pole 20, snowmen 10 coins, puddings and stockings seven, and candy canes or teddies are worth five coins each.

But wait! There’s more! Any 3-of-a-kind win also triggers the Festive Feast Feature and a bounty of bonuses. On each side of the reel grid is a bonus meter that awards extra jackpot spins, free games, and even a bank boost of 2500x your bet.

Join Frosty the Snowman in his winter wonderland and free his frosty goodies from blocks of ice to win! 20 rows form an icy reel of blocks that drop into place on the screen when you spin. Line up jingle bells, boughs of holly, gingerbread, Santa’s hat, and other seasonal symbols to make matches. Once a row is matched, the ice breaks, the goodies are released (along with coins), and another pile of ice cubes drops into their place—giving you the chance to win bonus multipliers with each spin if you make a match a second time.

The Ice Wild cube helps you trigger matches, hit bonuses, and break the ice. When you score more than three scatters in a row, Frosty tips his hat, jumps out in front of the screen, and plows through the snow with a merry moonwalk.

Swindle All the Way 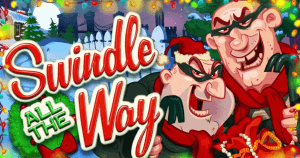 Another seasonal slot offering for the Bah Humbug crowd is Swindle All the Way. Two robbers are crashing down chimneys to steal presents faster than Santa can deliver them. Join them on their larcenous lark through a neighborhood chock full of presents, sacks of loots, and stockings stuffed with bonuses. These robbers even steal the milk and cookies left out for Santa!

Choose your wager amount and spin the reels set on 25 lines of play. Score rows of scatter symbols for a variety of rewards and bonuses. Land a combination of three or more Wild card robbers and Swindle All the Way scatters to activate the bonus feature. Then you’ll have to find robbers hiding in rows of windows to rack up big bonus spins and coin multipliers. The more robbers you uncover, the more spins you win. You can even trigger the feature again during your bonus spins for some really big bucks.

Those naughty robbers laugh and click crowbars whenever they appear, leading the way to some nice holiday loot. You can adjust the speed of the reels as well as your wager. Choose auto play to spin for you. If you hit more than three guard dog scatters in a row, lightning strikes and you win big!

So there you have it; enough jolly yuletide slot games to keep you busy all 12 days of Christmas. It doesn’t matter if you’ve been naughty or nice, all of these lucky Christmas slots can be played for fun or real money. So pick your favorite Christmas slots game and get ready for a wild sleigh ride! Because the best part of winter is the cold, hard cash. 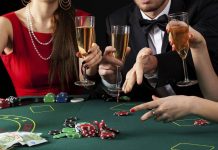 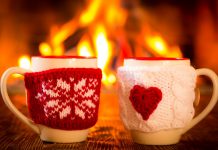 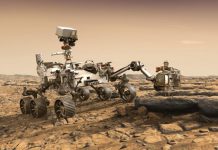 Macau Casinos Reopened but No Gamblers