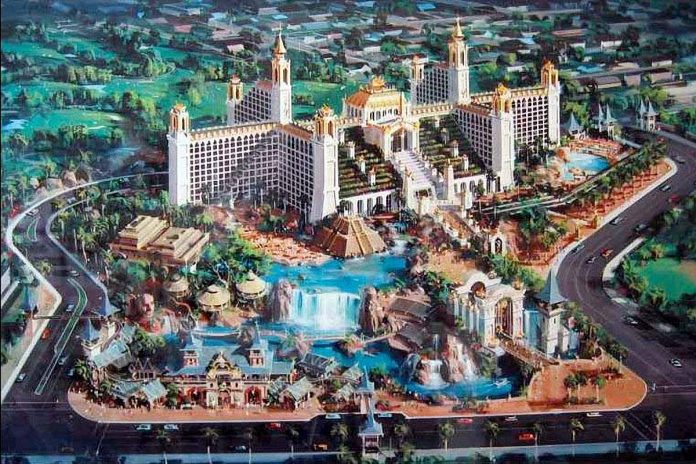 There seems to be a connection between ridiculous wealth and gaudy displays of expensive casino architecture in Las Vegas. Every casino in Las Vegas was built to attract visitors by whacking them with neon, seducing them with grandiose dreams, and pulling them into a cocoon of cash spending.

Almost every casino in Las Vegas has been expanded, extended or imploded to become a fantastic phoenix rising from the ashes of the old. With a motley collection of glass pyramids, concrete castles, and imitation icons from all over the world, no idea seems to be too big in Vegas – or too weird.

But what about all the grand casino plans deemed to wild and crazy to see the light of day in Las Vegas? Depending on your point of view, these scrapped casino plans were either too bold for their time, or could be safely filed under ‘WTF were they thinking?’

Seeds in the Desert

Nearly 200 years ago, Spanish traders passed through a desert oasis in Nevada with natural artesian springs. The oasis was named Las Vegas, ‘the meadows,’ and it later became the perfect watering hole for thirsty travelers and their horses heading to California or Utah.

When gambling became legal in Nevada a century later, casinos began to spring out of the desert to quench the thirst of gamblers from all over the world. With the money from these early casinos, the owners continuously rebuilt their gambling dens to become even more grand, gaudy, and grandiose.

Building a giant lake with huge fountains in the middle of the desert? Not a bad idea, said the Bellagio builders. Let’s up the ante: how about a replica of Venice, complete with canals and gondolas? You bet!

But what about Lost Vegas, the casino plans that were either too expensive, too absurd, or too weird even for Sin City? The following list of failed Vegas casino ideas just goes to show that even a weird, wild, and wacky place like Las Vegas has its limits. 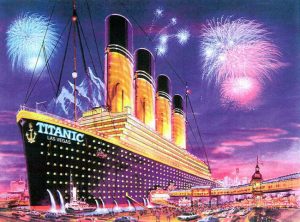 Picture the pitch: “We’ve got this great idea for a casino! We’ll take the biggest boat disaster in the world, replicate it in the desert, and people will come flowing in like water into the broken bow!”

That’s right. Somebody thought that the Titanic casino could be replicated in all its failed glory right in the middle of the Las Vegas Strip. Or maybe they were trying to capitalize on the success of the Titanic film which won 11 Academy Awards, including ‘Best Chick Flick.’

The Titanic casino was a $1.2 billion project which included a 400-foot-long replica of the ship with 1,200 hotel rooms inside a giant iceberg-shaped building. Along with the iceberg that sank the Titanic, they planned restaurants, an amusement park, and a zoo.

There was even a nightclub named ‘The Ice Breaker’ planned. Deemed a disaster from the get-go, the idea was scuttled by the Las Vegas Council, and the project slowly sank into the depths of the Vegas sands. 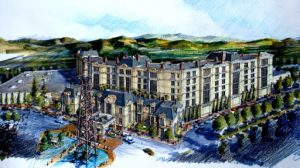 They moved to Las Vegas, of course. Bear planned a Beverly Hillbillies Resort with all the trappings of the show. A giant replica of the Beverly Hillbillies mansion, complete with outhouse doors with brass beer bottle door handles, Granny’s Shotgun Wedding Chapel, and a giant oil derrick out front.

Think of the resort as a yin to the Vegas yang, an opposite of all the glitz and glamour. Sadly, the idea had no teeth. But that didn’t stop Jethro from pitching the idea in Reno and beyond. 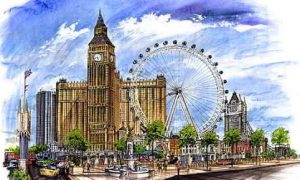 Vegas has Paris, New York, Venice, Rome, and Egypt all represented in casino form. One missing global icon was London, so a group of intrepid casino colonists pitched the idea of a London Resort & Casino in Sin City.

The posh playground was proposed for the area opposite the Luxor, and it would have included replicas of Big Ben, the Tower Bridge, and the London Eye Ferris wheel. Plans were in place for a Harrod’s department store and Piccadilly Circus.

Maybe the idea was nixed because nobody could sell anybody on a restaurant with British food. Maybe national dishes with names like toad in the hole, spotted dick, and blood pudding, would send tourists running and screaming for the Caesars buffet instead. 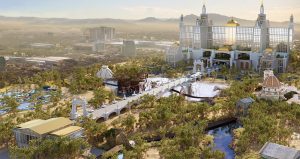 One thing missing from the desert kingdom of Las Vegas was a casino with the same name. At least that’s what the best laid plans of casino developers proposed.

The old site of the old Desert Inn was purchased by ITT/Sheraton in 1993, and they had plans to preserve the old Vegas icon casino by surrounding it by a massive new resort. The theme? A Bali-themed resort, of course, with all the huts, stone idols, and waterfalls you could possibly want in a resort.

The sprawling resort complex would have included a theme park and a river boat ride flowing under the casino to a magnificent lagoon and a night-time water show. The plan was nixed, and now Wynn and Encore resorts overlook a golf course where the Desert Kingdom could have been. 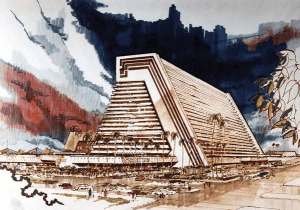 Way back in the day before the 80s mega-resort boom in Vegas, there was a grand idea for the first mega-resort in Sin City. In the 1970s, a $150-million casino resort project named Xanadu was in the pipeline.

Sadly, the pipeline is literally where the Xanadu project got clogged up. 1970s Vegas sewer lines were not able to handle the thousands of flushing toilets in the mega-resort, so the plans went down the drain.

Instead, the Excalibur Hotel & Casino stands in Xanadu’s place, just across the street from the Luxor.

Of Mice and Men

The best-laid plans of mice and men often go awry, as the saying goes. No matter how great the idea, how much money is thrown at it, or how carefully it is planned, something might go wrong.

And in the case of these doomed Vegas casinos, they just weren’t in the cards. In some cases, the idea was just too ludicrous – even for Vegas. But for others, the idea wasn’t necessarily any more gaudy or excessive than what we see on the Vegas Strip today. It’s just that the timing wasn’t right, the financiers got cold feet, or a bigger, bolder idea for a casino came along.

But Vegas keeps on changing, and whenever a casino comes up for sale, it remains to be seen if it will be upgraded and expanded or imploded and remade into something entirely new.