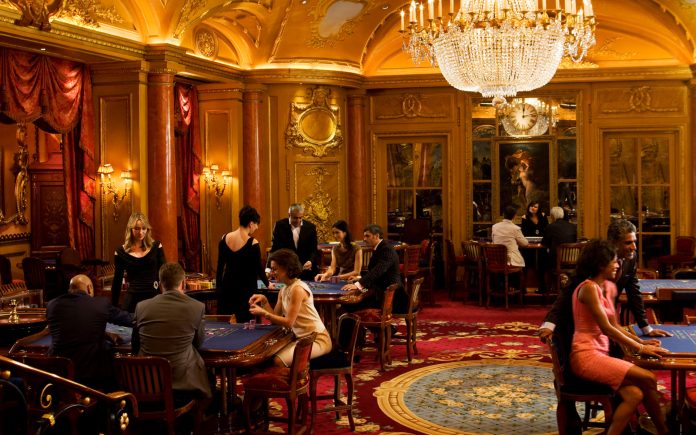 London has a rich history of gambling. It was famous with the royal families beginning with King Henry VIII. The king was an interesting character and volumes have been written about his life. He was very much involved with dice and gambling. But, when his military became involved and the soldiers seemed to become more interested in gambling activities than fighting wars, Henry decided to officially ban gambling for members of the army. Despite the king’s attempt to implement the ban, soldiers continued to gamble.

Gambling was so important to the royals, in fact, the kings had a dedicated croupier. His name was Sir Thomas Neale, and one of his more interesting roles was to find players who would concede to the king and let him win! Fair or not, Neale was kept very busy securing these players for the king’s entertainment and providing cards, dice, cups, and other items. He provided these services to King James II, King Charles II, and King William II. It was King Charles II who expanded Neale’s duties and appointed him as the overseer of gambling for the entire city of London. Drunk with power, he zealously started shutting down gambling dens that the kings did not approve of, and for his loyalty, he was rewarded by having a street named after him: Neal Street. 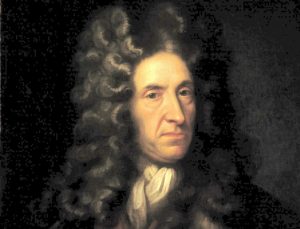 Defoe was quite the character. He was a writer and much like modern-day tabloids, he reveled in others’ downfall in his medium. He is infamous for his writing the 1722 novel about Moll Flanders, whose downfall he documented in detail, from her shoplifting and stealing to her descent into prostitution. He wrote about specific occurrences in Ms. Flanders’ life, such as her experience in a raffle shop. At the shop, a well-to-do man offered her funds for the raffle. After she wins a prize, the rich gentleman invites Moll to go with him to his coach. She does so, and, apparently, he got very drunk and passed out.

While the man is incapacitated, she stole everything he owned. According to Defoe, this was Moll’s modus operandi. The writer documents her as being a con woman who enters gambling dens and leaves after stealing cash and other items of value from male players. Defoe’s writings about poor people and the desperate climate that enveloped London in the 1700s is an interesting commentary about London society at the time. Drinking and gambling among the lower-class citizens were a huge concern to the upper classes, who wanted to keep an eye on people like Moll.

Gambling in London in the 18th Century 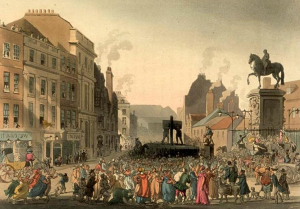 During the 1700s in London, gambling was prolific and could make a poor man rich very quickly. That means the social classes were somewhat of a roller coaster. A savvy player could play a card game and win a lot of cash, get respectable employment, then, be able to leave the poverty-stricken slums he had always known as home. It was equally likely the rich, who tended to be very extravagant, would bet huge sums of money in a show of their wealth and then lose everything. Rich men who suffered this fate were forced into slum living. Gambling was considered a vice and the establishments that housed such activities were sometimes referred to as hells and in the poor neighborhoods, they were called lower hells.

In London at the time, even the newly emerging form of the stock market was treated as gambling. It was not unusual for a person to place a kind of bet on the stocks and then lose everything. The government also funded lotteries. Overconfident players were known to lose fortunes playing the games.

Poverty in the 19th Century and Its Effects on Gambling 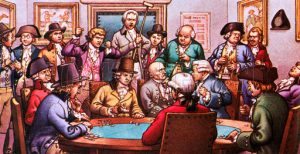 Fast forward 100 years and gambling was a little bit different in the city of London. The city’s oldest casino was opened in 1828. Crockford is currently on Curzon Street and was founded by William Crockford, with the help of the Duke of Wellington. To this day, Westminster’s famous casino is still very popular with gamblers and remains stylish and in vogue.

This was Charles Dickens’ London, and the famous novelist provided insight about his own opinion about gambling in a book he wrote called, “The Old Curiosity Shop.” In the book, Dickens gives an account of a lower-middle-class merchant with a family that included grandparents and a grandchild named, Nell. The family lived in poverty and the grandfather was very worried about leaving his granddaughter with nothing, so much so he started gambling.

The man loses everything in a card game and even winds up owing a large sum of money. It does not end well. The family man is hunted down by his debtors, and this leads him to have a breakdown. He tries to flee with his family to the Midlands, but they meet a tragic end. Nell dies from apparent exhaustion. The story is one of Dickens’ famous tales and it mirrors things that were happening in London society at the time. 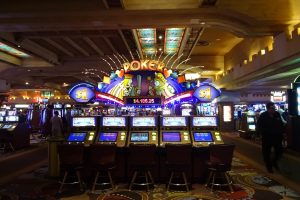 When the 1900s arrived, the Kray Twins became well-known in the gambling world. They were part owners of the luxurious Esmerelda’s Barn, which was a popular gambling destination for the wealthy. The two got rich themselves at the casino but initially did not have much to do with the day-to-day operations. That changed when one brother, Reggie, was imprisoned. After that, the other brother, Ronnie, became increasingly involved with running Esmerelda’s Barn, much to the dismay of the casino’s management. The management feared he was going to ruin the business. Therefore, he was offered a weekly salary to keep away from the place. But, Ronnie turned the offer down and the manager decided to leave. The casino continued operating and became a hub for well-known celebrities and other high-class party boys.

Gambling became more accepted as a part of the London landscape in the 1960s and as such, was legislated. The Betting and Gaming Act was introduced in 1961. It legalized gambling for the first time in London, and the result was the appearance of nearly 1,000 new betting establishments. This is when the fruit machine, an early version of today’s slot machine, came about in bars and pubs.

The very first to be given a legal license was Clermont Club in 1962. It had a Who’s Who list of patrons that included Princess Margaret, Peter Sellers, and Roger Moore. The Clermont Club still stands and is frequented by the upper crust of society. The 1960s also saw other famous casino openings, such as Charlie Chesters and the Golden Horseshoe. The number of casinos dropped, however, when the government passed tighter regulations, such as the Gambling Act of 1963. The act created boards to oversee gambling and resulted in a dramatic decline in the number of operators.

Gambling continues to be a thriving industry in London. The city has at least 25 existing casinos, which range in style from Vegas-style clubs to posh exclusivity. The city is unique in that it has gambling establishments that cater to both the wealthy and middle class. Anyone can game here. And, the hobby is interesting, indeed, given London’s colorful gambling history.