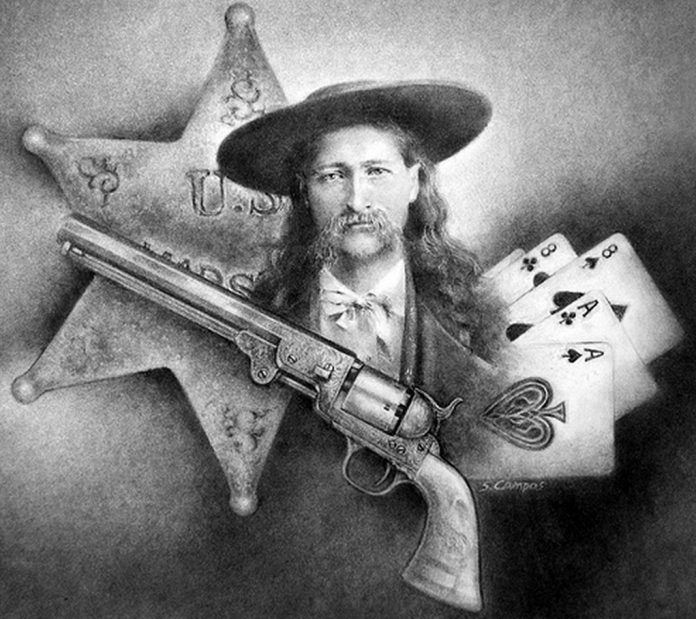 The Dead Man’s Hand is one of the most famous, superstitious hands in the history of all card games. The combination consists of a pair of black eights and a pair of black aces, with a fifth card that, to this day, has never been specified. Legend has it that the hand earned its name from the last waking moments of a notorious gun-slinging gambler called James Butler “Wild Bill” Hickok. In 1876, Hickok was offhandedly shot in the back of the head during a poker game, and was said to be playing this deadly combination of cards at the time.

Since that day, the Dead Man’s Hand has been marked as an omen of death and a foreshadowing of sheer bad luck. But who exactly was this mysterious man they called Wild Bill, and what was his significance all of those years ago?

Who Was Wild Bill Hickock? 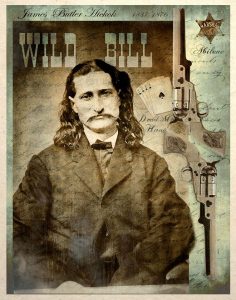 Born in 1837, James Butler Hickok was a well-respected gunfighter, actor, showman, and lawman in the Wild West, who also happened to be renowned for his fierce gambling skills. He was a wagon master during the 1861 Civil War and became the Deputy U.S. Marshal of Hays, Kansas, in 1869, then sheriff a few years later. Hickok earned his local stature for his participation in various shootouts throughout his early life. Such successful conquests included the 1865 duel with David Tutt of Springfield, and the shootout with the Bull’s Head saloon owner Phil Coe.

Hickok was also known to be extremely conceited and tended to spread stories about “other” victories and achievements that many still believe to be fictitious to this day. In 1861, during his time with the Jayhawkers of Nebraska, he decided to grow a mustache and give himself the legendary nickname, “Wild Bill” after years of being dubbed “Duck Bill” for his protruding facial features. The change of moniker certainly added to his legend and mystique. Nobody would be afraid of a gunfight with a gunslinger named “Duck Bill.” And in the Old West, reputation was everything — fact or fiction.

Despite glorifying his exploits and self-image for most of his life, Hickok still attracted attention from the papers as the years went on. By the time he was 39, he was already in a failing marriage and had begun to experience several health problems. But Wild Bill, being the imperishable adventurer he was, decided to set off to South Dakota in 1876 in pursuit of gold. He ended up spending the remainder of his short life there. He also spent many evenings inside the Nuttal and Mann’s Saloon No. 10, Deadwood, Blackhills, where he would drink until the early hours and indulge in one of his favorite pastimes, poker.

How He Met His Fate

On August 1, 1876, a notorious drunk called Jack McCall, aka, “Broken Nose Jack” challenged Wild Bill to a poker game and lost. McCall was far from happy, and Wild Bill even offered to give his opponent money for breakfast. Despite accepting his offering, McCall spent the rest of the night stewing in his emotions and obsessing over his defeat. The next day, Hickok was yet again playing a game of 5-card draw. He was said to usually sit against the wall so he could see the entrance and act fast if there was any trouble. On this particular night, however, he had to sit with his back to the entrance because a fellow player called Charles Rich refused to swap seats with him. 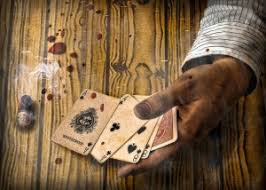 McCall later entered the saloon, walked up quietly behind Wild Bill before pulling out a 45-caliber Colt revolver, and screamed, “Damn you! Take that!” and then shot him at point-blank in the back of the head. The bullet perforated Hickok’s skull and came out the side of his right cheek, where it wounded another player, Captain William Massie. Wild Bill died instantly. As his body flopped back from his chair onto the floor, the cards he was holding revealed two black aces, two black eights, and an unknown hole card. From that moment onwards, the bloodsoaked combination of cards became known as “the Dead Man’s Hand.”

No person truly knows the reasons for McCall’s motives. Some say he was plain drunk and angry from his poker loss; others claim it was a revenge plot that was fuelled by the killing of his brother, Lew McCall, and Hickok was allegedly a suspect. Nevertheless, Jack McCall paid for his sins and was tried for Wild Bill’s murder, then convicted and hanged a year later.

The Legend Lives On

Despite what the history books say, there is much skepticism over the origins and myths surrounding The Dead Man’s Hand. The book that depicts the story was released in the 1920s, but some still believe the hand was a completely different combination of cards that was connected to an entirely different person.

Over a century later, the story of Wild Bill and the Dead Man’s Hand has played a big part in pop culture. References can be found in movies like the Plainsman, Little Big Man, Wild Bill, along with multiple television series, songs, books, and computer games.

Monuments and landmarks of Hickok have been erected throughout Deadwood, Dakota Territory, over the years. However, many of them were built elsewhere after being broken and defaced. His grave was also moved around to several different locations throughout the mid-1900s, and his remains were eventually secured in their permanent resting place at Mount Moriah Cemetery.

The Value of The Dead Man’s Hand

Even though Wild Bill’s deadly poker hand is associated with endless fame, history, and legend, the combination itself doesn’t hold much significance if you were to actually play it in a game. The two pairs aren’t awful, but they certainly aren’t great either; you wouldn’t have much chance at scoring a full house or royal flush, even with a high card in there. All things considered, though, being dealt a Dead Man’s Hand in poker can feel like an honor or a curse, depending on how the player perceives it.

There’s no doubt Wild Bill was one of the most highly-acclaimed men of his time. Even though he met a gruesome end, stories will forever be told about the Wild West gunman whose last dying moments and legacy were captured in a poker hand. In 1979, Wild Bill was memorialized posthumously in the WSOP Poker Hall of Fame, a lasting tribute to the all-time poker greats. Wild Bill had the distinction of being one of three men in the Hall of Fame who died while playing poker.