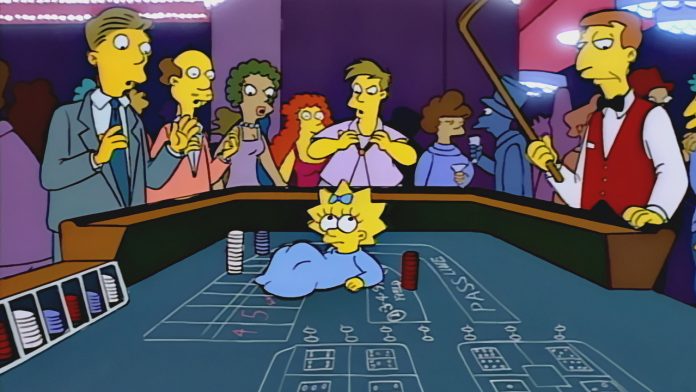 It was one of the most-watched cartoons of the 90s, and continues to be an all-time favorite TV show for adults and young people alike. The Simpsons is classic U.S. comedy that we’ve all been able to relate to at one point or another. But among all the belly laughs, the show has had its riskier and friskier moments over the years, picturing scenarios on infidelity, drugs, organized crime, and even gambling! We decided to dig out some of the most memorable episodes where the family has prayed for Lady Luck and faced some tough odds. 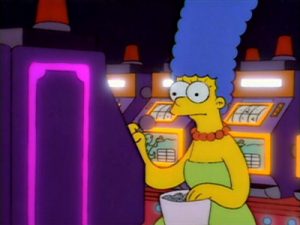 $pringfield, also known as “How I Learned to Stop Worrying and Love Legalized Gambling,” is an episode based on the town of Springfield facing an economic slump. In a bid to turn financial hardship around, gambling is legalized and Homer gets the role as a blackjack dealer in Mr. Burns’s Casino. During this time, Bart opens his own casino, Barney becomes a coin dispenser, Marge develops an addiction to slots, and Maggie almost ends up as Tiger food! It features some hilarious guest appearances from Robert Goulet and Gerry Cooney, and the episode is a fantastic salute to the 1964 Stanley Kubrik film, “Dr. Strangelove: How I Learned to Stop Worrying and Love the Bomb.”

In the most unconventional setting ever, Springfield Elementary decides to hold a casino fundraising event. Martin Prince is the evening’s host and Student President, and when Homer scores big on a casino game, he is told that he can only redeem his winnings in the form of a meal coupon. When other patrons catch wind that they can’t win any real money, the school descends into chaos and riots break out. Martin is fired from his position and a new election is held, with Lisa taking all the votes. She becomes a key advocate for the students to start with, but it’s not long before challenges arise and the school’s only solution is to dispose of her. 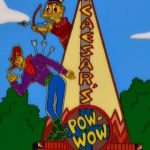 After the local church becomes heavily damaged from a jetpack accident, Marge leads the congregation and sets out to raise funds for the repairs. However, contrary to the holy book, they end up achieving this by learning how to count cards. Apu is the ring leader, and the group ends up winning at the local casino. After they hit the jackpot, Homer is taken hostage by the casino staff, who demands that he returns the money. When he tells them it’s already gone to the church’s contractor, they threaten him with physical violence. Will Homer make it out alive? And will the church end up receiving the cash it so desperately needs? It’s certainly worth finding out!

Following Homer’s advice while he is engrossed in betting on a football game, Bart attempts to gain popularity from his peers by decapitating the head of a statue. The head just happens to belong to the dearly-loved town founder, Jebediah Springfield, and Bart believes the act will earn him credits in the eyes of Jimbo, Dolph and Kearney. It doesn’t go down well with the bullies, and matters backfire very quickly when locals discover the crime. Once an angry mob is formed to find the culprit, Bart eventually owns up to his crimes and touches hearts when he returns the head. Even though the act brings the town closer together, Homer holds himself accountable for giving Bart the poor advice in the first place. Both are forgiven, and the angry mob disperses for yet another episode! 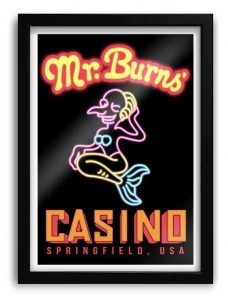 The plot begins with Homer partaking in a poker game at Moe’s bar with Lenny, Carl and Barney. Prior to this, Homer tells Lisa that if he wins, he’ll pay for her to enroll at a top-level band camp she’s always wanted to attend. He loses the $5k stake to a Broadway icon called Laney Fontaine. Homer then tries to convince Laney to give him the money back by inviting her to dinner at the Simpson’s house. It’s here where Laney and Lisa get more acquainted, and Lisa is recognized for her saxophone playing skills. This leads to Lisa jetting off to New York with Laney to perform shows for a month – but Marge soon begins pining for her daughter, and the whole family flies there to convince her to come back. Will Lisa remain in showbiz for good or could other troubles arise?

Homer is gambling Lisa’s life away again. Only in this episode, things start off well when he receives compensation for an accident involving hot onion ring oil. Like any considerate father, he puts it towards Lisa’s college fund; however, after being convinced by Lenny and Carl that banks are not safe for holding money, he decides to stick all the cash on an online poker site. Initially outraged, it’s not long before Lisa gets a taste for gambling herself when she realizes she’s pretty good. She starts raking in the wins, and at one point decides to recklessly bet all her college fund on one game … losing it all to former Krusty the Clown sidekick, Sideshow Bob. Oh Lisa… so smart yet so naïve! 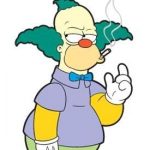 Speaking of Krusty – in this episode, the clown meets his long-lost daughter Sophie (aka Drew Barrymore), conceived from a one-night stand with an assassin during the Gulf War. The pair is reunited after Bart makes friends with Sophie and they begin to bond. However, happy families doesn’t last for long when Krusty ends up losing his daughter’s prized violin in a poker game to Fat Tony. This causes distrust and betrayal in the parent-child dynamic, and it’s up to her boozy clown of a dad to try and set things right. But not without taking a few risks first, of course! 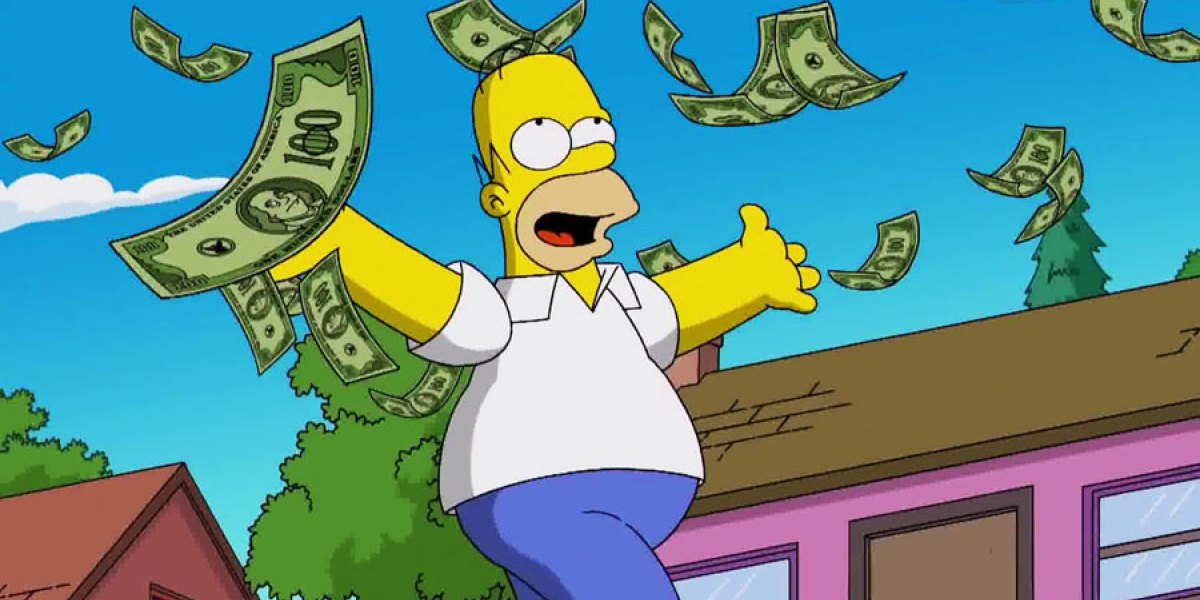 Marge and Homer are both due to attend a friend’s wedding. The day soon comes, and Homer heads to the Kwik E-Mart to purchase a lottery ticket. Due to the long wait in the store he misses the wedding, but the lottery ticket he picked turns out to be a winner worth $1 million. Despite Homer’s initial ecstasy, he soon becomes anxious about revealing his true whereabouts to Marge and why he wasn’t at the wedding. To ensure she doesn’t suspect anything, he decides to buy the family lavish gifts to act as one big cover up for the real secret he’s been hiding. Will Marge blow her lid when she finds out? Or could Homer have misjudged his wife’s reaction? 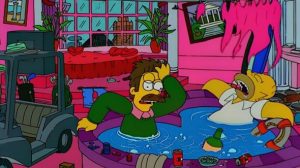 Homer notices his long-term neighbor (Ned Flanders) is receiving a senior discount for a car wash. After confronting Flanders about his age, he reveals to Homer he is 60-years-old. Nobody can believe it when he says it’s all down to clean living and his daily dose of church, prompting Homer to take pity on his neighbor for not having any fun with his life. Somehow, Homer manages to convince Flanders to head to Las Vegas with him. They play roulette, get completely inebriated, and end up marrying a pair of cocktail waitresses. Having no recollection of the night or the marriage when they wake up, the duo must now figure out an escape plan to get back to their “true” wives. What will they manage for a palatable excuse we wonder?

Ah, the point where it all began. Episode 1 is the story about how the Simpsons’ loveable little pooch (Santa’s Little Helper) made his way into the family. After Homer is given news that he will not be receiving his Christmas bonus, the family head to the local mall to spend the last of the money they do have on gifts. Much to his parent’s horror, Bart decides to get a tattoo, resulting in the money being used to have it removed instead. In a bid to recoup the losses, Homer and Bart head to the dog racing track on Christmas Eve, only to lose and end up adopting the greyhound that cost them the bet. Santa’s Little Helper ends up being the best gift the Simpsons could ask for, and immediately becomes a dearly-loved member of the family. 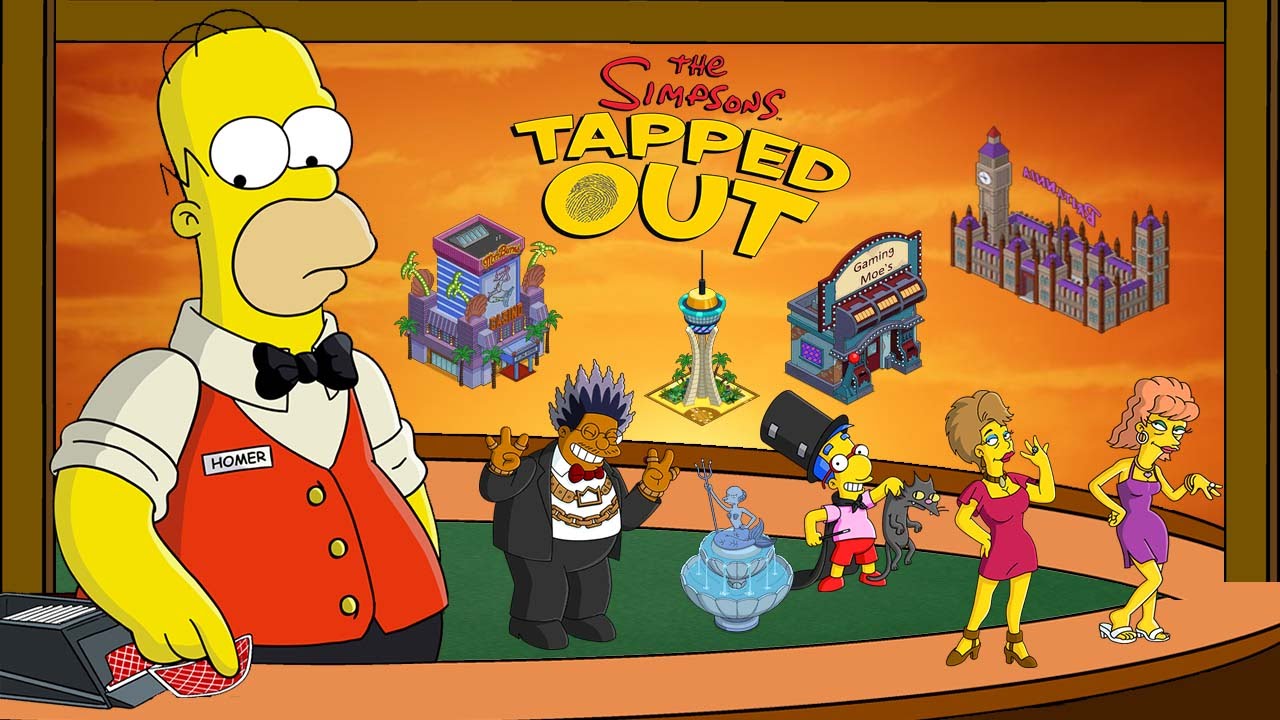 There might be some pretty ludicrous ideas and plot twists in the Simpsons, but there’s plenty of storylines that are pretty believable too! The only difference is when these characters are doing it, we actually get something to really laugh about.

That’s all from Springfield at this time, folks! 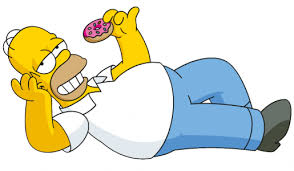