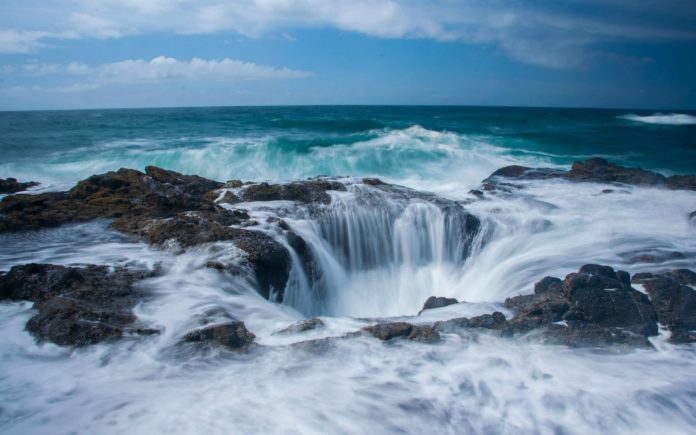 Our planet is home to an array of wonderful places and things, whether we’re talking the elegance of Niagara Falls, the colossal, belly-dropping height of Mount Everest, the natural delights of the Amazon Rainforest, or man-made phenomenons such as the ancient Pyramids, the Taj Mahal, and the beautiful Great Wall of China.

Although the myths have been successfully busted for many of them, archaeologists, scientists, explorers, and researchers are always attempting to unravel the world’s mysteries. And, there are plenty we’re all still scratching our heads over to this very day… 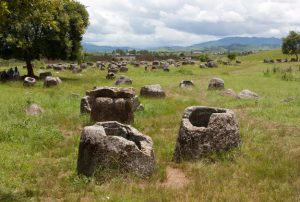 Dating back to around 500 BC, the mysterious Plain of Jars in Laos has been puzzling scientists for decades. Thousands of megalithic jar-like stones are lodged into the Xieng Khouang landscape. The stones consist of limestone, granite, and sandstone, which were allegedly chiselled into shape using iron and other metal tools.

Even now nobody knows what was ever kept in the jars, but one theory says they once belonged to giants who used them to store rice and collect rainwater. 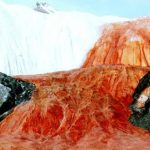 Blood Falls is the gory glory of Antarctica, and looks like something straight out of a horror movie. Despite being one of the coldest and driest areas on earth with tranquil white surroundings – the red waterfall is the one anomaly in the Christmas Card landscape. It was discovered in 1911 by a Geologist from Australia named Griffith Taylor; however, it was only in 2014 research was able to determine the waterfall’s unnerving color. Turns out it was just extreme oxidation of iron in the saltwater pools. 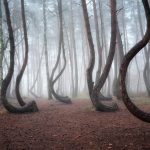 Krzywy Las, aka the Crooked Forest is located on the German-Polish border near the town of Gryfino, West Pomerania. The forest is exactly what it sounds like, and features more than 400 unusual-looking pine trees which are systematically bent at the stumps.

The trees were planted there in the 1930s, but nobody knows what gave them deformity. Some locals suspect weather damage, others say a special method was used to make them grow in this odd way. 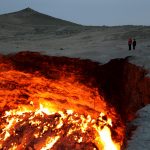 The Darvaza gas crater in Turkmenistan was purposefully caused to prevent a potential methane gas attack in 1971. What geologists didn’t realize was that it would continue to burn a giant hole into the Earth’s crust to this very day.

At 98ft deep with a diameter of 226ft, it truly looks like the gateway to Satan’s fiery abode, and has become a popular destination for tourists as a result. Apparently you can see it glowing from miles away at night! 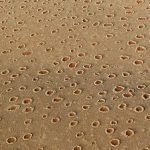 Up until a few years ago, Fairy Circles were only thought to be situated in the Namibia desert, but can now be found throughout Western Australia and the outskirts of Africa too. These strange circular formations occur in barren lands, and people still can’t work out what causes them.

Many theorize the vegetation and plants are competing for water because of the dry conditions and lack of nutritious soil; others believe its a clever, natural ecosystem of the sand termites that live inside the circles. 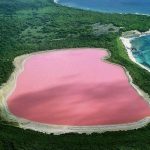 Instantly recognisable by its candyfloss pink color, Lake Hillier in Goldfields-Esperance in Western Australia is another one of the world’s most beautiful and fascinating spectacles.

The pink water is allegedly due to millions of microorganisms and bacteria called Dunaliella salina, and even though it may look as toxic as it is pretty – it’s home to fish and all sorts of other sea life. Although it’s not advised to swim it apparently…Dang! 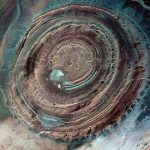 Known as the Eye of the Sahara, the Richat Structure could easily be dubbed as some kind of UFO crash site, but it’s peculiar design comes from natural erosion of the rock layers. As these layers become exposed to the elements over time, they wear down and settle into symmetrical ring-like structures.

The entire dome spans across 40 kilometres in diameter, and is so huge it can even be seen by astronauts, who call it “the bullseye.” 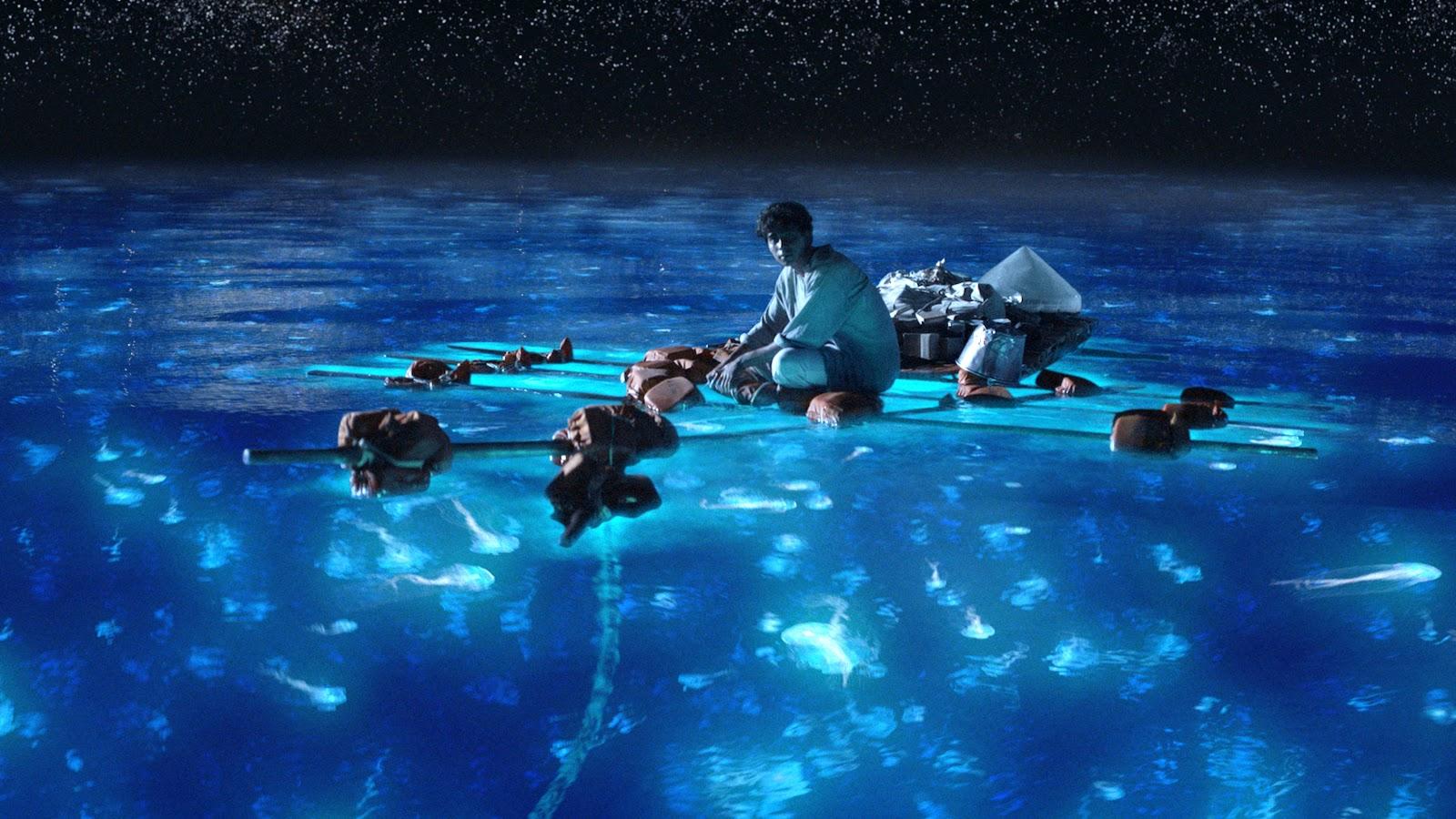 Anyone vying for a romantic pursuit should make a trip to Sea of Stars. While the cosmos twinkles above you and your significant other, the Indian Ocean will be lapping at your toes with its own luminescence, caused by billions of microplankton.

These organisms contain the same light mechanisms seen in fireflies and glowworms, and is one of the most beautiful and remarkable events that occurs on more than 1,200 islands in the Maldives. 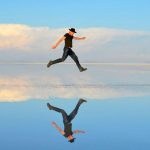 At 10,582 square kilometers, Salar de Uyuni is considered the world’s largest salt flat. The prehistoric lake is located in the Daniel Campos Province, Bolivia, and features a crust tiled with thousands of hexagonal cracks in the dry season.

In the wet season, however, it becomes a heavenly wonder for tourists when the surface transforms into a perfect mirror. You can look at the clouds above, and their reflection beneath your feet! 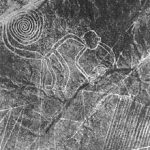 If you fly over the Nazca Desert of Southern Peru, you’ll be able to witness a group of gigantic impressions in the landscape which resemble humans, animals and plants. Each one is made up of hundreds of lines which are said to have been hand-carved by Nazca people around 500 BC, although to this day nobody knows their purpose.

Many think they are fertility and astronomical symbols, others believe they were created as irrigation systems.

A World of Wonder

While many of the above can be explained by natural occurrences, there are plenty of other places on this planet that cannot. The Bermuda Triangle’s fatal pull still capsizes boats and pulls down aircrafts, while the Marfa Lights in Texas baffle visitors and UFO followers with an unexplainable light show every year.

It’s unlikely that these mysteries will be solved in our lifetime, but at the rate technology is evolving and with new discoveries being made all the time, it seems we’ll never be short of phenomenons and miracles to marvel at!