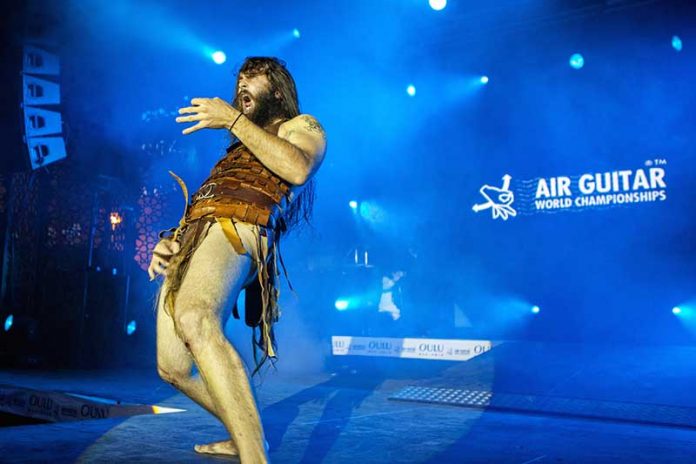 You may have heard of crazy competitions happening around the world such as extreme ironing, baby crying contests and the world sauna championships. If you think those are weird, we’ve got some to add to the list that will make you question how much you value your own talents, body and more importantly – dignity! 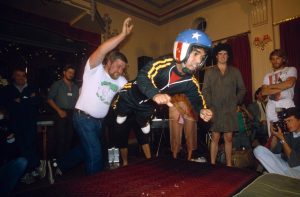 Also known as ‘Dwarf-tossing’,  this sport (if you want to call it that) is a tradition that began in Australia back in 1980. It has since become a wide-spread, form of pub entertainment that even countries such as France, Canada and the US have adopted. When it first became popular, there was much speculation around how it could be considered “gross infringement on human dignity” – but as long as the dwarfs themselves give consent to being thrown, it is generally seen as ok. The act itself involves competitors physically throwing a dwarf in a Velcro costume or special padded clothing, onto either Velcro-coated sticky walls or a mattress. Whoever throws the farthest, wins! It’s as simple as that… although we’re not really sure what the dwarfs themselves get out of it! 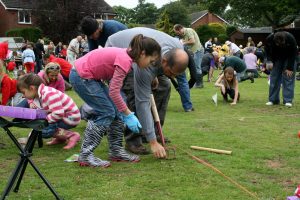 It may sound a bit unorthodox, but the art of worm-charming is something that many mammals, birds (and even reptiles) have been using as a technique for catching pray, for millions of years! Some cultures call it ‘worm grunting’ or ‘worm fiddling’, but the methods are exactly the same for all. It involves drawing as many worms to the surface of the earth as possible in a set time, and generally competitors are delegated a patch of soil measuring around three meters by three meters, with a three minute warm-up period, and a three-person team: a charmer, a catcher, and a counter.

Because the worms react to the vibrations above the ground, some of the most common ways to charm them are: twanging a garden fork, dragging a wooden stake across the surface, playing music and sprinkling tea, beer or water onto the soil. The worms are counted at the end of the contest, and the team with the most is declared the champion. The only condition: all worms must be returned to the soil once the competition is over. 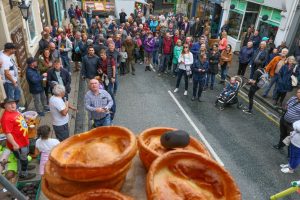 According to local legends, Black Pudding Throwing has been a tradition that dates back to the ‘War of Roses’ English civil war era, where in 1455 a great battle took place in Stubbins, Lancaster. The opposing sides were the House of Lancaster and the House of Yorkshire, and the theory goes that once both factions ran out of ammunition, they resorted to throwing food at each other instead – black pudding from Lancaster and Yorkshire puddings from Yorkshire!

Today, the world championships are held outside the Oaks pub in Ramsbottom every year, and competitors must knock down a 7.6 meter high plinth of yorky pudds by chucking 3 black puddings at them in an underarm maneuver. It sounds bizarre, but it’s meant to be extremely fun! Next they’ll be another absurd craze like people chasing random blocks of cheese down a hill… 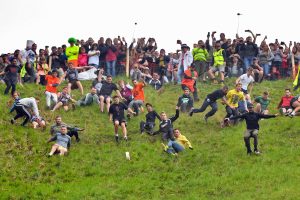 Yes, you heard it right. Cheese rolling is actually a thing in Britain, and has been for centuries. It is actually believed to derive from Pagan times where people would throw bundles of burning brushwood down a hill to commemorate winter ending and the New Year beginning. This is also believed to be the reason why the Master of Ceremonies scatters sweets and biscuits at the top of the hill, in celebration of the “fruits of harvest.”

Taking place on the late Spring Bank Holiday Monday at 12pm every year, there is no criteria for entering or rules to the competition, other than you can’t start the race until the cheese block has been sent down the hill first. Whoever makes it to the bottom and catches it first, is crowned the winner and gets to keep it for him or herself. If you decide to give it a go, be warned as some overly-enthusiastic participants have been known to injure themselves and even break bones galloping after the cheese in the past! 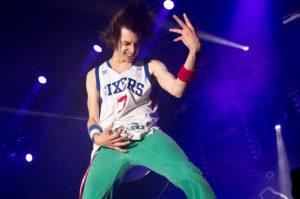 Air Guitar is a dance movement primarily seen in rock/metal and acoustic music environments, which involves people pretending to play an imaginary guitar or band instrument, usually accompanied with singing or lip-synching. It originally began in Finland around the 1980s during a music festival and is where the idea for the contest also came about. Entrants must perform a 60-second section from a song of their choice, followed by an additional round where the organizer selects the song. Each round is scored from 4.0-6.0 based on: technical merit, mimesmanship, stage presence and ‘airness’.

We’re not entirely sure what they win, but these days the concept is so popular that many other countries around the world hold their own contests, where several hundred Slash and Dimebag Darrel-type impersonators compete against each other using their greatest riff and solo attempts, knee slides, and lizard tongue expressions, in a bid to be crowned the air-guitar champion! Rock on!!! 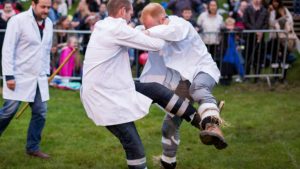 This savagely competitive and downright painful game, has actually been considered as an English form of martial art, and has been since the 17th century. Contestants must quite literally kick each other’s shins until their opponent hits the ground. Traditionally the ‘shin-kickers’ are required to wear white coats in representation of shepherds smocks. When the round begins, they must each hold onto the others collar, and then attempt to strike the others shin with the inside of their foot as well as their toes. If the contestant cries out “sufficient” it means they have forfeited and the adversary wins the round.

There are usually three rounds per game, which are observed by a referee and who also determines the scores. According to old myths, some contestants used to wear toe steel-cap boots to inflict as much pain as possible, whilst others would physically hit their shins with hammers to try and build up their pain tolerance. We’re not sure about you, but this really makes us lack sympathy for those football players always rolling around the pitch in ‘agony’! 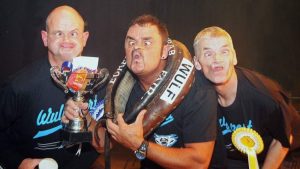 Gurning, meaning in English “to pull a face” is the act of distorting one’s facial features into the ugliest expression they can fathom. The championships are currently held every year at the Egremont Crab Fair, and contesters must present their best gurn whilst framing their faces through a horse collar. The fair hosting the annual contest, has been part of British heritage since the days of King Henry III, and is officially granted under the Royal Charter. Gurning competitions however, were only introduced to the fair in the last 50 years or so. Usually, the ‘sport’ is much easier for people with little or no teeth, as it allows them to move their jaw in a more unconventional manner; such as stretching their bottom lip over their nose.

The elderly are said to have a great advantage when it comes to this, but young contesters have also been known to conjure up the most hideous grins and grimaces in the past. Some have even proved eligible to take the crown (or horse collar), such as Tommy Mattinson – who allegedly won the official championships 11 times over! 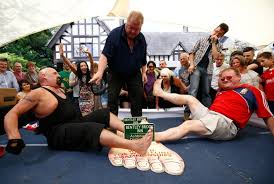 You really do need to have an athlete’s foot for this game! Or at least some brute strength in your pinky! The name quite literally says it all – ‘Toe Wrestling’ dates back to 1974 and was thought up by 4 drinkers inside Ye Olde Royal Oak Inn, Staffordshire, UK. Contesters must remove both shoes, and step up to the ‘toedium’ where they must then face each other lying down, and interlock their toes.

Much similar to arm wrestling, the objective is to try and force each other off the toedium. If you ever fancy seeing the action with your own eyes, or getting involved – the Toe Wrestling championships are held every year at the Bentley Brook Inn, near Ashbourne, and still attract a decent crowd even to this day! Our only piece of advice is to maybe take a peg for your nose, as naturally it can get a bit smelly during these kind of off-key events! 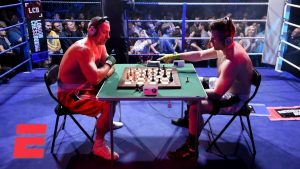 You would never expect such a vigorous and brutal sport such as boxing to ever meet such a calm, composed and strategic game like chess. But since 1992, the world has seen exactly that, and the game exists in countries like England, Germany, Netherlands, France, Russia and Japan these days! So how does this strange game work you might ask? Firstly, the players must go head-to-head in a 4 minute round of chess. Once the four minutes is up, they must then proceed to the ring and box each other for three minutes, before again returning to the chess board.

The entire match is made up of 11 rounds (six rounds of chess and five of boxing), including a one-minute break between rounds. The players receive a pair of boxing gloves as well as headphones when they are partaking in the chess sections, as to not receive any advice from the crowd. The scores are based on who triumphs the most on both games i.e. knocking out the opponent or gaining a check mate. When brain meets brawn – Chess Boxing is born! 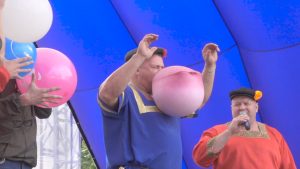 Hot Water Blowing is considered an official sport and has even made its mark in the Guinness World Book of Records! It’s an act which requires an extremely strong lung capacity as well as great chest and abdominal strength. The aim of the game is for the contender to blow the water bottle up to the point where it explodes. There have been many health concerns associated with this sport, particularly when it comes to the eyes and lungs, so it is not as encouraged as you might think.

In the past, there have been slightly different variations of the game, one of them entailing blowing the hot water bottle up with only your nose, and the other to blow it up with your mouth whilst another person sits on it. The fastest ever hot water bottle burst ever recorded was 6.52 seconds, and achieved by a British man called Shaun Jones back in 2011. As fun as it sounds, and as amazing it probably is to see in the flesh – we’ll stick to keeping the winter warmers under the covers in our beds thanks!

These aren’t the only strangest competitions you’ll ever hear about that go on around the world. Some of them are so weird or under-rated, they can hardly be called a ‘sport’ or championship! For instance, there’s Competitive Bed Jumping, Spud Gun Contests, Ugliest Dog Competitions, High-Heel Marathons, Conker Tournaments, Power Tool Racing and even the Championship of Unemployment to name a few. We can only imagine what others are out there with little publicity yet – but as long as there are serious competitions going on globally, there’s no doubt going to be a few head cases out there that putting on these kinds too! At least they’re thoroughly entertaining, on top of being a bit moronic!