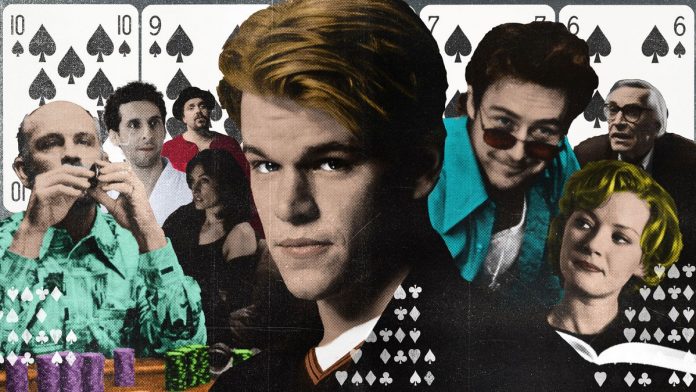 Life is a gamble. Some of us are luckier than others, and we all count our lucky stars that our circumstances aren’t worse. And even people who don’t gamble are bound to use quotes about gambling; it’s in our nature. When we talk about ‘being dealt a lousy hand’ as a metaphor for misfortune, we don’t think about playing poker at that moment.

In one of the great cult films about gambling, Matt Damon cuts loose with some real winning quotes during the film Rounders. When teamed up with Edward Norton as his partner in card crimes, these two card sharks rook the rubes and deliver some fantastic gambling quotes along the way.

Mike McDermott (Matt Damon) is the smooth card conman who can size up a table of poker pros like no other. His partner, Lester “Worm” Murphy (Edward Norton), is in for the low-brow con and quick flim-flam.

When Mike is sizing up the competition at a poker table, his thoughts describe the action and set the scene for all the subtle moves going on. At every table, there is a sucker, and Mike pulls no punches.

“It is immoral to let a sucker keep his money.”

But how do you identify the sucker at the table in order to fleece the poor guy? According to Mike, it’s easy:

“If you can’t spot the sucker in the first half hour at the table, then YOU ARE THE SUCKER.”

During their tour as ‘rounders,’ or traveling gamblers making the rounds, Mike and Worm get into a fair share of trouble when they fleece some dangerous people. When the wrong people discover you are playing some sneaky card tricks, this can lead to making many enemies.

“You can shear a sheep many times, but skin him only once.” 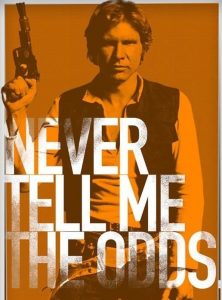 Even in galaxies far, far away, people gamble. Han Solo (Harrison Ford) is an intergalactic gambler, rambler, and all-around action man. Constantly on the run from gambling debts to gangsters like Jabba the Hutt, Han Solo is sure to know a few gambling quotes.

But his best gambling quote in Star Wars was a one-liner delivered in response to a droid talking about odds. Han Solo was about to take the Millennium Falcon straight into an asteroid field, when C-3PO chimed in about probability:

“But sir, the possibility of successfully navigating an asteroid field is approximately 3,720 to one.” – C-3PO

A great casino heist movie is bound to be full of juicy quotes about gambling. Danny Ocean (George Clooney) gathers a band of professional thieves, cons, grifters, and escape artists together to pull the ultimate heist: rob the biggest casino in Vegas.

Each one of Ocean’s 11 knows his part. Some are the distraction (balloons and clowns), others are vault experts, others oversee logistics. And of course, they chose the man with the smoothest voice on earth to deliver the best quote of the film, which serves as a nice motivational speech to boot. Why are these 11 guys about to risk their lives robbing the casino?

“Because the house always wins. Play long enough, you never change the stakes. The house takes you. Unless, when that perfect hand comes along, you bet, and you bet big. Then you take the house.” 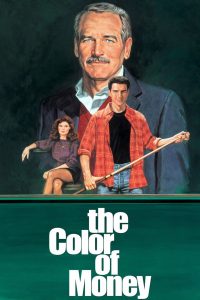 What do you get when you combine Martin Scorsese, Paul Newman, and Tom Cruise? One of the greatest pool hustler movies ever made. The Color of Money continues the story of “Fast Eddie” Felson (Newman), a pool hustler out to rook the rubes in The Hustler (1959).

“Fast Eddie” is now retired from the hustling game, but he is still something of a talent scout who stakes bets for promising pool players. When he meets young Vincent Lauria (Cruise), he sees his potential right away and begins to mentor the young lad in the ways of the hustle.

The retired pro perfectly explains the gambler’s rush and the reason for the hustle:

“Money won is twice as sweet as money earned.”

A list of movie quotes isn’t complete without words of wisdom from Al Pacino. In Two for the Money, Al Pacino joins Matthew McConaughey for some sports betting high jinx in a great tale of two men trying to beat the odds.

Walter Abrams (Pacino) is the head of a large sports consulting operation who meets a former football star with a gift for picking winning bets. Brandon Lang (McConaughey) left college football after a major injury, but he is an expert at picking star players.

When Abrams takes Lang under his wing, with Lang’s knowledge and Abrams’ connections, the two start to make tremendous amounts of money handicapping football games. And Pacino’s best quote is from a speech which sums up the gambler’s rush in grand cinematic style:

“You know the best part of the best drug in the world isn’t the high. It’s the moment just before you take it. The dice are dancing on the table. Between now and the time they stop, that’s the greatest high in the world.” 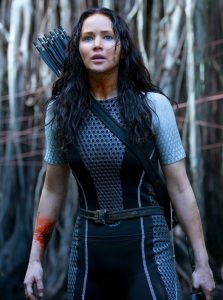 In a dystopian future, communities are mismanaged to the point of starvation, which leads their overlords to concoct a brilliant sports betting opportunity which will give them great gambling opportunities and fun watching the televised event.

Unfortunately for those involved in the Hunger Games, 23 out of 24 of them will die in the process. Each province holds a lottery where one young person is chosen to participate in the deadly battle of 24 teens fighting to stay alive.

The winner receives the gift of life (having survived all the others), and the winner’s community (sector) gets to feast like kings. The twisted lottery is a major media event watched by everyone, and right before the youngsters go out to fight to the death, a slick announcer sends them off with a greeting:

“Happy Hunger Games, and may the odds be ever in your favor.”

There are many more movie quotes about gambling, but these sound nuggets set the tone for the movies and summed up the characters who delivered them. Some of them are short but sweet, others are more of a pep talk.

And for everyone on this list, gambling is a way of life in one way or another. Whether it involves trying to hustle a poker opponent or dodging asteroids, the thrill of beating the odds makes for a great time spent at the movies.