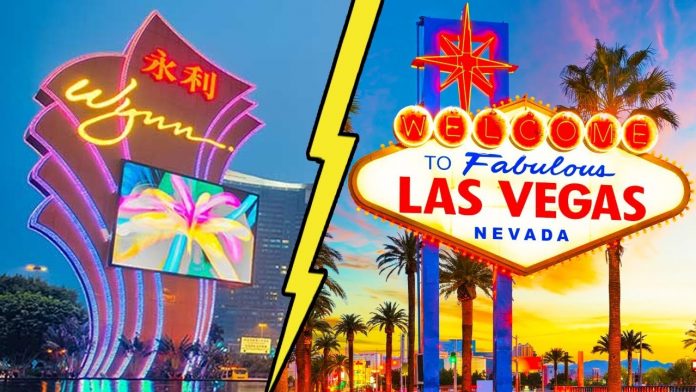 Macau surpassed the GGR of Las Vegas many times over, and it continued to grow its gambling sector to the point where half of Macau’s economy is based on gambling tourism. As gambling is illegal in mainland China, millions of Chinese punters head to Macau to gamble because it is legal there.

Each of these gambling meccas has something unique to offer, so read on for a comparison of Las Vegas and Macau, the two largest gambling destinations in the world. 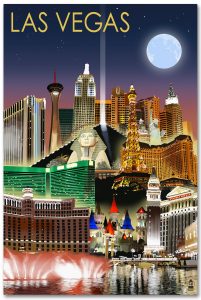 The story of Las Vegas (‘the meadows’ in Spanish) is a modern tale set in the Old West. This desert oasis served as little more than a watering hole for westbound travelers during the California Gold Rush, until some enterprising gangsters started building casinos there when gambling became legal in the 1930s. What began with mobsters like Bugsy Siegel drew millions of dollars in casino money to the area, which soon became a magnet for adventurers and gamblers.

By the 1950s, Vegas became known as an ‘anything goes’ city based on vice and entertainment of every stripe. It became the haunt of the hip and cool Rat Pack crooners, and later home to music legends like Elvis.

But Vegas had its second boom in the 1980s, when most of the skyline of Vegas was transformed almost overnight into the sprawling empire of high-rise decadence it is today. Old West saloon-styled gambling joints were imploded, and glittering glass and steel mega-resorts were built in their place. Many billionaires sprouted from the dry desert sands of Nevada in a town in the middle of nowhere.

Vegas casinos were in a race against each other to see who could build the biggest, boldest, and bawdiest buildings. And everybody seemed to win the race, putting Las Vegas on the global entertainment map forever.

But soon an Asian upstart would enter the global gambling scene to challenge Vegas as the ultimate entertainment paradise.

Vegas of the East 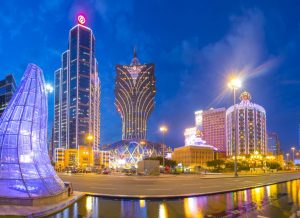 Macau was a former colony of Portugal with a long and storied history. Located on the southern coast of China, Macau served as a shipping port for the mighty sailing fleets of Portugal. Eventually, China ceded Macau to Portuguese rule in 1557, where it became the known as the colony of Macao for hundreds of years. It has the distinction of being both the first and the last European colony in Asia.

When the British returned Hong Kong to China and Portugal returned Macau soon thereafter, both areas became special administrative regions (SAR) of China, with a large degree of autonomy. And in Macau’s case, that included legal gambling. Fortunately for gamblers, Macau already had a burgeoning casino sector thanks to ‘gambling king’ Stanley Ho.

Once the Macau government decided to end Mr. Ho’s monopoly on gambling, they offered casino licenses for sale for international casino developers. And the gambling mines opened for Western casino moguls to stake a claim. And stake claims they did. After decades of development, the most famous casino companies in a world have properties in Macau, including Sands, MGM, Wynn, and more.

Both gambling hubs have glittering glass and steel skylines to greet visitors with fantastic visions. The descent into Las Vegas is a surreal experience, as the plane soars over endless miles of empty desert to give way to visions of pyramids and sphinxes, the Eiffel Tower, Statue of Liberty, and the canals of Venice. It’s as if every iconic building on earth had a secret meeting in the middle of the desert.

Of all the gaudy grandeur of the architectural pseudo-wonders in the Las Vegas desert, the Luxor stands out the most. A pyramid seems more at place in the desert than the Statue of Liberty or the Eiffel Tower, but the Luxor’s glistening obsidian shell makes it appear more sci-fi than ancient world. Not to mention that at night, the most powerful beam of light on earth fires straight up from the apex of the Luxor pyramid to pierce the night sky.

The Luxor Sky Beam plus the sheer concentration of billions of neon lights gives Vegas the distinction of being the brightest spot on the planet when seen from space at night. If aliens visit earth, you know where they’ll stop first.

Macau, on the other hand, blends the modern world with the ancient, and merges the cultures of East and West in one place. Crumbling facades of classical colonial architecture and cobblestone streets meet the stainless-steel skyline of a modern casino city. A stroll through Macau is like strolling through the centuries – in a lush, tropical setting.

The architecture blends the vibrant street life of a bustling Chinese town with the stately colonial buildings left behind by the Portuguese. The casino building which dominates the Macau skyline is the Grand Lisboa casino. Part skyscraper and part lotus blossom, the iconic Grand Lisboa is clearly the most eye-catching casino building in Macau. It’s what happens when imagination and modern architecture are allowed to fully ‘blossom,’ as it were.

For those who want to get down to brass tacks, let’s compare Vegas and Macau by the numbers. As previously stated, Macau has long eclipsed Vegas in terms of GGR. The average gaming revenue per year in Las Vegas is $11 billion and a whopping $28 billion per year in Macau.

Las Vegas has double the number of casinos compared to Macau, and the number of hotel rooms in Vegas is staggering. Macau has 113 hotels with nearly 38,000 rooms, while Vegas boasts nearly 150,000 hotel rooms, with 94,000 of them being located on the Las Vegas Strip. And Macau has its own ‘Strip’ to compete with Vegas. When Las Vegas Sands began developing the Cotai area of Macau, it named the street with all its casinos the Cotai Strip.

With so many hotel rooms housing so many guests, how can Macau’s revenue beat that of Vegas? It’s in the gaming floors. Casinos in Macau are usually double the size of the ones in Vegas, and the total gaming floor space is staggering. Both Vegas and Macau have a Venetian casino courtesy of Sheldon Adelson and Sands, but The Venetian Sands boasts the world’s largest casino floor at 376,000 square feet.

What Macau lacks in hotel rooms it compensates for in sheer gaming floor space. Visitors go to Vegas for the whole entertainment experience, gambling, food, shows, and all, but Macau gamblers are in it to win it. That’s not to say Macau doesn’t have its fair share of celebrity chefs and world class entertainment. The average visitor just spends more on gambling in Macau, hence the numbers.

The largest contributor to Macau’s massive GGR is the VIP high roller demographic. Special VIP junket tours fly crazy rich Asian gamblers on private jets to private gaming sections of casinos in Macau – where they drop millions of dollars. The average visitor to Vegas drops only several hundred dollars each.

It’s not only how much gamblers spend, it’s also what games they play. And in Macau, baccarat is king. Baccarat accounts for 90% of Macau’s gaming revenue, and most games of baccarat are played in the luxury VIP rooms. In Vegas, slots make up 70% of all casino revenue. Which is why there are so damn many of them.

A Matter of Choice

So, which of the two global gambling playgrounds would you choose? It comes down to personal choice. Sin City’s reputation is legendary, and Vegas is the go-to party town, hands down. And Macau leans toward luxury and specializes in VIP high roller action, with a heady mix of world culture thrown into the mix.

That’s not to say that ordinary gambling tourists don’t have a great time in Macau. There are plenty of budget accommodation options and a wide variety of gaming options for everyone.

Maybe the biggest difference between the two tourist towns is simple. Hordes of travelers come barreling into Sin City every day screaming the gambler’s mantra, “Vegas, baby!” Meanwhile, back in Macau, nobody is yelling “Macau, baby!”

At least not yet.