Selfies are one of the most common ways to take pictures these days. They are one of the best ways to inform your friends of exciting changes going on in your life. You can take a selfie if you are at a special event with family and friends, on vacation or just got a new haircut. However, there are some times when selfies can get out of hand. Like many cultural trends, selfies can go too far. This is the result of people not paying attention to their settings when taking one.

Here are some of the reasons why selfies can be extreme at times, as well as examples of selfies that have gone too far.

Kids Are Taking Their Cues from Adults

While people love to “blame” Millennials for many of our current self-centered trends, this is not always accurate. Adults often take selfies every chance they get. It is not uncommon to scroll through the social media accounts of friends and see several selfies. If you are part of a friend’s wedding, you’ve likely taken a selfie so everyone can see your professional makeup. Of course, you’ll want your followers to get a glimpse of your stylish wedding outfit as well. If you like to spend time at the beach and want to let your friends and family see how beautiful the scenery is, a selfie is the solution.

When children see this, they are likely to repeat the behavior of the adults around them. This could send the message that instead of enjoying the moment, it’s more important to get a picture. While taking a photo is a wonderful way to capture special events, it should not be the top priority.

Psychologists, parents, and bloggers argue that excessive selfies make people too self-centered, regardless of their age. Taking selfies and posting them online also means that people want approval. The amount of feedback that people get concerning their selfies could be detrimental.

All Psychology Schools asserts that social media can have mental benefits. The likes that people get make them feel as if they belong. The approval that individuals receive when posting selfies can also decrease feelings of loneliness. A study showed when people see their pictures get positive reactions, they feel the people who post them are more trustworthy.

While we are actively engaged in social media, it can make us happy. We get a sense of fulfillment from knowing that people think we are appealing or interesting. We also feel better when we spread happiness to others.

While this sounds great, it is imperative to remember everyone won’t like everything you post. Not getting enough likes on a selfie could result in lower self-confidence. Younger people may start to feel as though something is wrong with them. This could lead to body image issues and an obsession with expensive clothing and accessories.

These factors could lead people to go to great lengths to produce an impressive selfie.

According to sites, such as bemethis.com, some people take time in the middle of disasters to take selfies. The website shows a picture of two women taking a selfie as the car behind them goes up in flames. The women both have semi-shocked or frightened looks on their faces. This may be to indicate that they know the situation is risky. But, they had to get a selfie. Musician Macklemore took a selfie while his friend, who is in the background, holds onto a rock. Macklemore doesn’t notice that his friend could fall. After all, it’s time for a selfie, which is the top priority. While celebrities may take pictures like this as a joke, there are several young people who may emulate this. Trying to take risky photos for the purpose of social approval could be dangerous and life-threatening.

Jigglehive.com also has a selfie of a man who has been in a serious accident. The man has blood on his face from the accident. The car, which is in the background, is also badly damaged. However, he felt that it was time to take a selfie while waiting for medical treatment.

While having a baby is a monumental event, the hope is that the process isn’t dangerous. However, it could be unsafe if you’re in labor and you’re around people who are taking selfies. Jigglehive.com has a picture of a student taking a selfie. The photo caption indicated that his teacher was having contractions. The panicked look on the teacher’s face is evident. The student would obviously be more useful in assisting his teacher than taking a picture.

Selfies Under the Influence

Of course, when people are partying and drinking, they want to remember the moment with a selfie. This could be harmless in most cases. However, jigglehive.com shows a picture of a girl and her friend being pulled over by the police. The girl took a selfie as the cop is at the window asking for her license and registration. The look on her face indicates she is clearly still in “celebration” mode. This is obviously not the right time for a selfie.

According to the Daily Mail, a woman in Ibiza accidentally fell to her death in 2015. She had just been proposed to by her boyfriend and jumped from excitement before slipping and falling 65 feet. A couple from Poland experienced a similar fate in 2017. The husband and wife were taking a selfie on the edge of a cliff and lost their balance. These tragic examples are reminders that every setting is not ideal for a selfie. There are some aspects of nature that you should simply observe visually. Or, the photographer should capture the scenery when he or she is in a safe position.

It may be hard to believe, but there are some people who even go under the knife for selfies. Triana Lavey, a talent agent in Los Angeles, did just that. Lavey didn’t like how she looked in photos and selfies. So, she got a nose job and a chin job. She also got cheekbone additions. The procedures totaled around $15,000. Situations like these prove that taking selfies is addictive for some people. 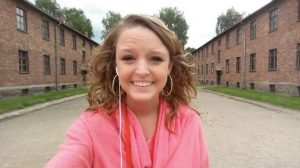 While some selfies aren’t dangerous or life-threatening, they can be inappropriate. People want to take selfies at historic sites when they visit them. This is fine for the most part, but taking a smiling selfie at the Auschwitz concentration camp is pretty distasteful. While people may want their friends and family to know they’ve visited the location, a smiling selfie is out of place. Auschwitz was a place where more than a million people lost their lives. It’s probably best to simply take pictures of the location and to save selfies for another time.

Chances are selfies won’t be going away any time soon. This isn’t a huge problem, as long as we stick to a few ground rules. Keeping the location and circumstances in mind can make for successful selfies. Most importantly, we have to remember that selfies should be a way to commemorate good times. Using logic and safety precautions can ensure that selfies don’t go too far.