Home » USA Online Casino Blog » Which State Will Be the Next One to Legalize Sports Betting? 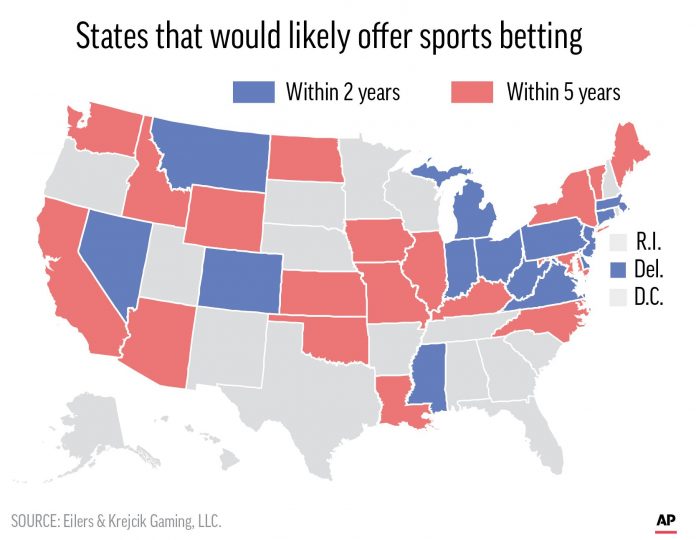 The Professional and Amateur Sports Protection Act (PASPA) banned sports gambling in the United States for 26 years. After 1992, there would be no sportsbooks allowed in the U.S. Congressional leaders felt there was too big of a chance sports figures would gamble without the law in place. The federal government did not feel that they could trust sports figures not to gamble on their own sports. However, in the years since 1992, there has been very little reporting on athletes gambling. There have also been reports about daily fantasy sports companies making millions of dollars on daily sports games.

Which states have already made the leap into sportsbooks, and which states are going to be next? Here is some information for you.

PASPA outlawed all single-sports gambling in the United States. That meant, with the exception of Nevada, no state could have single sports betting. There were a handful of states that allowed parlay betting. New Jersey could have chosen to pass legislation to legalize sports gambling. The state had a narrow window in 1992 before PASPA came into effect. New Jersey could have used the time to pass single sports betting, but it failed in the legislature. Nearly 20 years later, in 2011, the Garden State passed a law allowing sports betting at racetracks and casinos.

The New Jersey law quickly ended up in court. The professional sports leagues and the NCAA sued the state to stop it from allowing single sports betting. Between 2012 and 2017, the state and the sports leagues were fighting in the courts. New Jersey changed its law to try to appease the courts, but the sports leagues immediately challenged the amended law. The Supreme Court agreed to take the case in the summer of 2017. It took nearly a year for the High Court to make a decision about New Jersey’s law.

Mississippi, West Virginia, Pennsylvania, and New Mexico had sports gambling up and running before the beginning of the NFL season. Each already had casino gambling. Therefore, it was not difficult for the states to get a sports betting bill passed.

The spring legislative sessions saw Montana, Indiana, and Iowa legalize sports betting. Tennessee also legalized online sports betting. This was a surprise because the state has no casinos and no racetracks. The Tennessee Lottery will run the sportsbooks.

With the legislative sessions in full swing, who will be next to legalize gambling? Of all the states currently debating the measures, the next state that will most likely get sports betting is Illinois. Both houses of the Illinois legislature have passed the bill, and it is waiting for the governor to sign it. Experts believe the governor will sign it, which will make Illinois the third Midwestern state to legalize gambling.

New York also looks to be out of the gate with regard to sports gambling. Both the Senate and the Assembly passed bills to legalize gambling. They await the governor’s signature. While many people believe the governor will sign, it has not happened yet.

There are 43 out of 50 states that have introduced a bill. But some states have a greater chance of passing them than others. For example, despite the introduction of a bill in Georgia to legalize sports gambling, it did not pass. Georgia is notoriously opposed to gambling. However, other states are considering the legislation.

Michigan appears to be trying desperately to get sports gambling passed this time. Last year, a bill legalizing sports gambling passed both the House and the Senate. However, on one of his last days in office, the governor vetoed it. This veto came as a shock to legislative experts, who believed he would sign the bill. Legislators reintroduced it this session, and many hope the new governor will sign it.

Connecticut had the legislation in 2018. A new bill has begun moving its way through the legislature, but it has not passed yet. Kentucky’s possible new bill legalizing sports gambling would allow the racing commission to handle sportsbooks. That bill was also introduced in early 2019, but it has also not been passed.

Massachusetts has been at a crossroads with regard to sports gambling. The state has seen a lot of negative publicity surrounding gambling this spring. That is because there were hearings regarding the casino license for Wynn Resorts close to Boston. There have been many scandals for Wynn Resorts to deal with since the abrupt resignation of Steve Wynn. He had to resign in the fall of 2018 because of sexual harassment and sexual assault allegations. After days of hearings, Wynn sold the resort to MGM Resorts. Sports gambling has been sidetracked because of the furor over licensing.

The states of Maryland, Minnesota, Kansas, and Missouri all introduced sports betting legislation in their 2018 legislative sessions. However, there was no movement toward legalization in any of these states after the initial filing. The bills all died in committee in 2018. As of right now, there have been no new bills introduced into the legislative bodies.

This year, there is no telling which state will be the next to legalize sports gambling out of the blue. One thing is certain, however. There will be far more states that legalize sportsbooks by the end of the year.