It Began with the Supreme Court

It has been about six months since the United States Supreme Court ruled that states could decide to legalize gambling. Before May, gambling was legal in only one state—Nevada. Nevada legalized sportsbooks long before sports gambling was banned by the US government in the early 1990s. However, since the Supreme Court ruling, Mississippi, New Jersey, Delaware, West Virginia, and Pennsylvania have legalized single sports gambling. Many more states are expected to legalize gambling in the next year. More than twenty states should legalize gambling before the end of 2019. hese changes meanSports gambling is moving from the backrooms and paper trails to the slick shops in the casinos, racetracks or online. 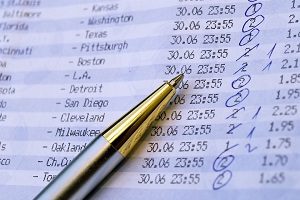 Eddie is an old-school bookie in New York City. He has an office in the basement of an apartment building. The large room has desks arranged to look like an L; each desk has a stack of index cards. Every week, Eddie and his three employees write out the wagers of the bettors for Sunday’s games—in triplicate. The office has no fax machine, no phone, and no copy machine. Every day until Sunday, Eddie and his employees take orders.

On Mondays, Eddie and his employees get the cash out the safe, count the money, and settle all the wagers. His employees then hand-deliver the money to the winning clients. By Monday night, all of the winning wagers have been paid, and Eddie begins a new week of wagers.

Eddie turns seventy this year. He says he is going to hang up his bookmaking scheme he inherited from others in his family. There will be no one to leave his business to. Eddie represents the last of a dying breed of bookmakers who still do things the old-fashioned way.

How Eddie Worked His Business

Eddie has spent nearly all of his life as a bookie. Although he did a stint in the Army fighting in the Vietnam War, and a couple of years working what he calls a “regular job.” He began running numbers as a teenager and has always enjoyed the numbers as they relate to wins and losses. He did not work for the mob. But he will admit to knowing people who were connected to the business one way or another.

Eddie knows all of his clients personally. He decides on his client’s limits based on the years of interaction, and their record of betting. Eddie decides how much his clients can afford to lose, and he doesn’t change his mind. Any customer who does not pay up after he or she loses a bet is never allowed to bet again. But it has been Eddie’s experience that going after people for the money they owe is how many bookies get arrested. Once a bookie gets arrested, they are out of the business, because they are always on the police radar.

Eddie has really enjoyed his job, but he knows it is nearly over. He has a base of loyal clients, but they are all aging. All of the younger customers would rather place a bet online or in a casino than travel to see him. Customers can bet from anywhere in the country using fantasy sports programs like DraftKing and FanDuel, or place sports bets offshore. Eddie knows that when his business closes, it means the end of the neighborhood sports bookie.