There were some interesting games in the ACC last week. Perhaps the biggest upset was that of Virginia Tech. The team somehow managed to lose to Old Dominion for the first time in … well … ever. This week has some interesting matchups as well, so prepare to bet based on the predictions below. The year in the ACC promises to continue to be interesting.

To put it mildly, there’s Clemson, and, then, there is everyone else. Quarterback controversy aside, the Clemson Tigers have one of the best defenses in the country. However, the offense has struggled to the point that the coach replaced his signal caller. He hoped the switch would energize the players. Instead, it has further alienated the players from the team and this is a shame. Sweeney is a hard-working coach and has had a good track record during his tenure with the Tigers. However, the Tigers should be able to right the ship this week, because they are ready for the Syracuse game. Syracuse ruined their hopes for a championship season last year.

North Carolina is 1-3, behind an unimpressive defense and a marginal offense, at best. Miami, after being creamed by LSU in the opening game, has righted itself. It moved to 3-1 since its big loss to LSU. In addition to an improving defense, the offense may have finally found a catalyst in its redshirt freshman. He did nothing except drive the Hurricanes down the field repeatedly last week. Before Perry came under center, the team’ offense was lackluster. However, coach Mark Richt has not said yet whether Rozier or Perry will start. So, asking -18.5 on the spread is a bit high. Also, it is worth knowing the Tarheels are 4-0 against the spread. 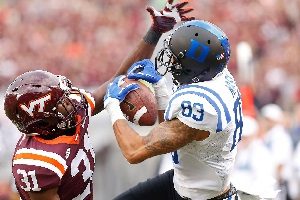 The mighty have fallen. Truly. At the beginning of the season, Virginia Tech was thought to be a Top 20 team. There was a chance the team could challenge Clemson for the ACC title. Virginia Tech is coming off an astronomical loss to Old Dominion, the first for the Hokies. As far as Virginia Tech goes, the offense isn’t the problem. It presents an evenly matched passing and running attack that is able to put plenty of points on the board. The problem is in the defense. The defense managed to squeak by during its first three games. The Holies were not lucky when they played an Old Dominion team that was up for the challenge.

In contrast, Duke, at 4-0, appears to be on the way up as a football program. The team has presented a balanced passing and running attack. The Blue Devils have also beefed up their defense. And, so far, while not the most talented defense ever seen in the ACC, the team has performed well. It allowed only 15 points per game while averaging 37 points on offense. Take Duke to beat the spread.

This is an interesting game to try and pick. Virginia’s team has played pretty well so far. It routed Louisville on its last outing, being solid on both offense and defense. The team’s one loss was an absolute stinker against Indiana. However, the team has managed to rebound and has shown much more cohesion on offense and defense. The Cavs are 6-0 against the spread in September and 4-0 against the spread in their last four games.