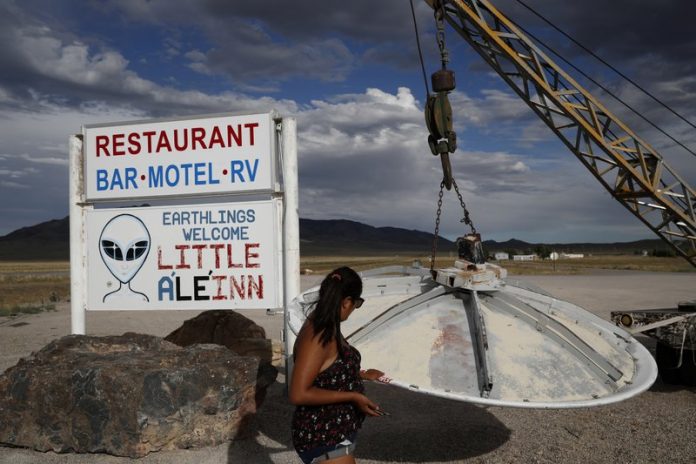 More than 2 million people have clicked the ‘going’ button on a Facebook event named ‘Storm Area 51, They Can’t Stop All of Us.’ An additional 1.4 million people are ‘interested’ in attending the event. The event was removed from Facebook for “violating community standards,” but has now been returned to the popular social media channel.

The day of the event is set for September 20th, 2019. Event creator Matty Roberts introduces the event with a powerful CTA: “We will all meet up at the Area 51 Alien Center tourist attraction and coordinate our entry. If we Naruto run, we can move faster than their bullets. Let’s see them aliens.” Naruto is an anime ninja character who runs very fast.

Area 51 is the infamous military base located 150 miles from Las Vegas. It has long been ground zero for alien conspiracy theories, secret weapons testing, and hidden UFO wrecks. Alien conspiracy theories date back to 1947, when the infamous Roswell Incident involved an unidentified object crashing in the desert. After secreting away the object into the underground Area 51 base, the official reports stated it was a weather balloon. The disbelieving public immediately went straight to the little green men theory, and the theories ‘ballooned’ from there.

The desolate desert area in Nevada has long been held by the military for various purposes, including atom bomb testing in the 1950s. Regardless of potential isotopes flying around, alien-loving tourists flock the Extraterrestrial Highway to Area 51 and its surroundings, swooping on small town diners for souvenirs and/or dancing in the desert at the Burning Man Festival.

Facebook originally removed the event for violating community standards (inciting revolt?), but later returned the event to Facebook with an apology. Apparently the social media giant was missing the likes. 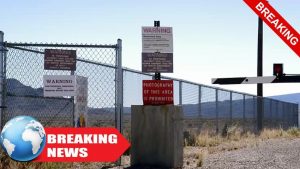 While most people now agree that the social media experiment is a hoax, and that no such event will actually take place, the U.S. military has issued its standard-issue warning: “The U.S. Air Force always stands ready to protect America and its assets,” USAF spokesperson Laura McAndrews said.

Whether or not the U.S. military knows this is a hoax or not, they will not be loading their guns with blanks. Ominous, rusty signs surround Area 51 warn potential trespassers of the dangers of entering an armed, secret military base, just in case people might think such an activity is a good idea.

Large groups of people are easily swayed, even before Facebook showed its face on the digital scene. In a famous fictional radio broadcast in 1938 called War of the Worlds caused mass panic. Narrator Orson Welles used the power of the popular radio media as a vehicle for his outstanding performance of a ‘fake newscast’ about an alien invasion. Even though the work was clearly based on an H.G. Wells book, the public was terrified.

This is a fascinating story about what happens when you mix the power of social media, millions of millennials with nothing better to do, and a jittery, caffeinated group of soldiers hidden under the Nevada desert sands. It speaks to our need to find the hidden truth in everything, even at the risk of being shot by soldiers.

While most rational people would automatically recognize the Facebook event as a brilliant parody, there may be a few hundred people who just might try to storm the gates. Call it fascination, call it suicide by soldier. Any takers should be shortlisted for a Darwin Award.

Each year, Uncle Bill refers to the people as “those hippies with the coyote poop hair” who gather in the Nevada desert for drugs, dancing, and debauchery at the Burning Man Festival. These Earth mamas and papas like to get loaded up on goofballs and dance in a possible radiation zone. Then they burn a giant straw man for warmth. And spout off some sort of pseudo-crypto-anarchist message. The desert loves freaks.

If anything can be taken out of this Facebook Area 51 event, it’s this: people love conspiracies, and are easily gathered in groups and swayed into action. It’s all just a gag, much like the U.S. presidency. The feverish, alt-right, faux-rednecks don’t really believe anything Trump says, right?

Meanwhile, we’ll wait to see how this ‘event’ unfolds. At the very least, it will be entertaining to see if anyone shows up in the desert to get shot. We’ll start the popcorn.