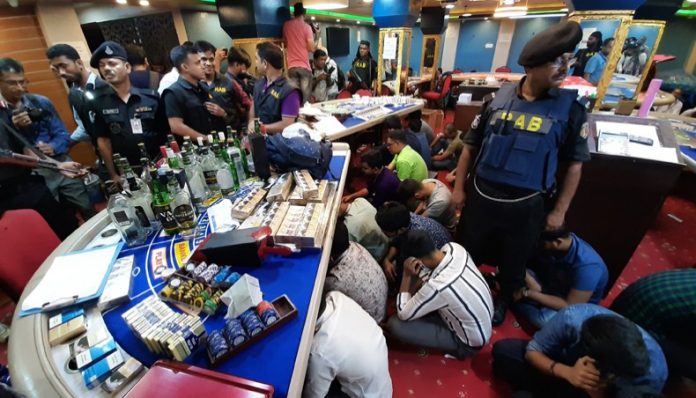 Police in Dhaka, Bangladesh, raided 5 establishments in a major crackdown on illegal gambling. During the raids, the Rapid Action Battalion arrested 182 individuals, including the leader of a political group. Khalid Mahmud Bhuiyan is a leader of the Jubo League, a youth wing associated with the Awami League Party.

Police seized cash, alcohol, drugs, and firearms in addition to slot machines and blackjack tables. Police also said the majority of those arrested for running the illegal gambling operations were from China and Nepal.

When Bhuiyan was arrested, the accusations hit the fan. Many people claimed the raids were politically motivated to damage the Awami League’s standing. A number of police officials were also implicated in the arrest, and Home Minister Asaduzzaman Khan Kamal denied the allegations of any political plot.

Along with the usual hordes of cops, the police brought mobile courts with them on the raids, and sentenced many of those arrested on the spot. The unlucky punters received sentences ranging from 6 months to 1 year in prison.

Rapid Action Battalion? Jubo League? Mobile Courts? This smacks of a superhero smackdown. It’s like some draconian form of the Justice League called the Avengers and their dogs to take a bite out of crime.

Mobile freaking courts? Talk about Rapid Action Battalions; we thought they just ran fast while shooting tear gas. Color us impressed. Do the judges in the mobile courts also get to dress up in riot gear? Do they use a gavel or a police baton?

The fact that they caught some copfish and political poi in their dragnet only proves one thing: people from all walks of life like to gamble, from politicos and cops all the way down to the local gentry.