The Cayman Islands, which has long had a ban on gambling, is poised to consider a revision of the gaming law that has been one of the most punitive in the Caribbean. The Caymans, looking for other forms of income, and looking for foreign investment, may completely scrap their law that banned all gambling in the island nation. 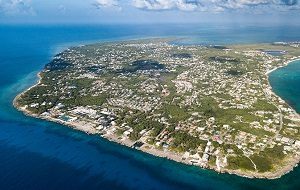 The Cayman Islands are a British Territory that is comprised of three different islands: Grand Cayman, Cayman Brac and Little Cayman. The three islands are in between Jamaica and the Yucatan Peninsula of Mexico, just to the south of Cuba. The Caymans have a population for about 60,000 people, most of whom are on the large island of Grand Cayman. The islands are considered to be a financial tax haven for corporations and the wealthy, with many banks and other financial institutions located on the island.

The Cayman Islands are relatively prosperous when compared to the rest of the world. The islands are the most prosperous in the Caribbean. The greatest source of revenue for the government in the islands is taxation, in the form of import duties. In some cases, the import duties for the islands can be as high as 100% on automobiles. The largest source of income for the islands is tourism. Most tourists go to Seven Mile Beach, which is the home of many of Grand Cayman’s hotel resorts. The islands are known for scuba diving tourism, because the waters are so clear, and tourists are able to see a wide variety of animals. In fact, one of the most popular sites for snorkeling is called Stingray City. This area is famous for the number of stingrays available to be fed and photographed.

The Problem with Gambling

It would stand to reason that one of the offerings of a tropical island would be gambling. However, unlike some of the other islands in the Caribbean, the Caymans instead passed legislation in the 1960s that banned all forms of gambling. While that ban was fine for Cayman inhabitants and tourists until the 21st century. Increasingly, people living or visiting the Caymans gamble online using offshore accounts and offshore gambling companies. Research has indicated that as many as 70% of people living or visiting the islands gamble online.

The legislature in the Caymans was planning to pass a bill in October that would impose further restrictions on all forms of gambling on the island. The proposed bill would increase the fines for illegal gambling from $400 an occurrence to $10,000. The bill also increases the amount of time in jail if a tourist or resident in the Caymans from one year to three years.

Many legislators in the government not only want to thwart passage of the gambling bill, but want to improve on the legislation and allow legal gambling. The argument is that there is no real point trying to ban gambling on the islands, because people will find a way to gamble if they want to, and the internet has made that completely possible because the internet is everywhere. In addition, people on the islands can also use mobile phone applications to gamble.

Legislators point out that there are several benefits to allowing for gambling on the islands. First, the legislature could allow gambling, and reap the benefits of the revenue for the country. Revenues could be used to improve social programs and infrastructure on the islands. Second, the legalization of gambling would take the market out of the shadows and reduce the level of criminality that goes along with illegal gambling.

Whatever the government in the Cayman Islands decides, it is sure that people will still continue to gamble.