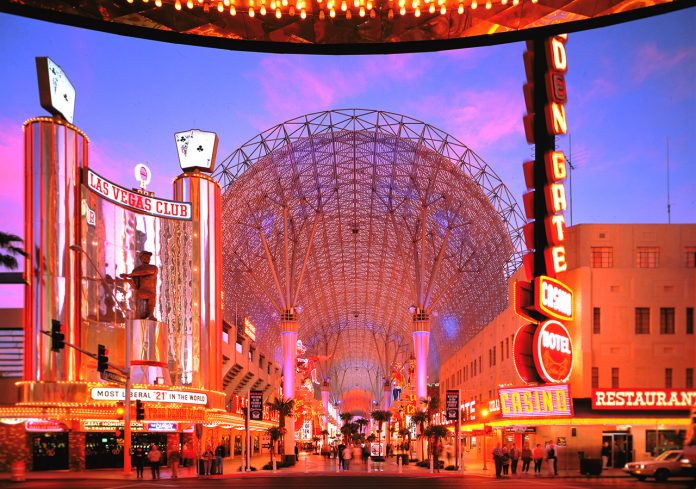 The image of billionaire philanthropist and Vegas visionary Tony Hsieh was projected on the canopy over Fremont Street in Downtown Las Vegas after his death in a house fire.

Tony Hsieh (pronounced ‘Shay’) graduated from Harvard University and started an online marketing firm known as LinkExchange. After selling it to Microsoft for $265 million in stock, he founded the online shoe retailer Zappos in 1999.

He then flipped Zappos in 2009 for $1.2 billion in a sale to Amazon, which asked him to stay on to run the company. After moving the Zappos HQ to the former Las Vegas City Hall building in Downtown Las Vegas in 2013, he got the idea for a change.

He pledged $350 million to revitalize Downtown Las Vegas, and the Fremont Street Experience was born. Building on the street of vintage Vegas casinos along ‘Glitter Gulch,’ Hsieh is credited for breathing new life into a part of town overshadowed by the Las Vegas Strip.

Vintage Vegas casinos like the Golden Gate, Binion’s, and 4 Queens light the way to the revitalized area covered by a dazzling LED projection screen canopy, the largest in the world. The open-air pedestrian mall leads to the newest casino developments in the area, including the D Las Vegas and Circa resort, the first casino in Vegas to be built from the ground up in 40 years.

Casino mogul Derek Stevens, who owns the Golden Gate, Circa Resort, and The D Las Vegas, helped organize the tribute to the late Tony Hsieh. Stevens, who also helped transform the Downtown Vegas landscape with his casinos, tweeted a brief statement about Hsieh. 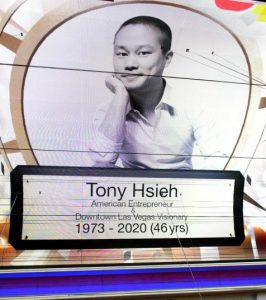 “Supporting this City and the people within it, Tony Hsieh changed the landscape of Downtown Las Vegas,” Stevens tweeted.

A flood of support poured out across social media channels, including a tweet from the Mob Museum, which tweeted that Hsieh “was a longtime friend and tremendous supporter of the Museum and incredibly passionate about the revitalization of downtown Las Vegas. We will miss him dearly.”

On the evening of Saturday, December 28, a five-minute tribute to Hsieh lit up the canopy over the Fremont Street experience. Images of Hsieh were projected onto the canopy along with the Eric Clapton song “Tears in Heaven.”

Tony Hsieh died in a house fire while visiting a friend in Connecticut. He is reported to have died from smoke inhalation after being trapped in the burning house. He was 46 years old.