It’s no secret that China and the Trump administration are at odds with each other. The argument between the two countries began before President Donald Trump assumed office in January of 2017. However, the trade war between the two countries has become more problematic during the summer with China issuing high tariffs on US-made products such as motorcycles, cotton and soybeans; and the United States issuing high tariffs on Chinese imports including phones, computer parts, and aluminum. The trade war has escalated and now includes some of the largest technology companies in the United States. These companies have long been at war with China over their right to operate in a restrictive Chinese environment as opposed to a non-restrictive environment such as the United States.

Now the economic tension between the two countries has begun to seriously affect Apple, one of the largest companies in the world. China declared last month that Apple has not acted to filter out prohibited content in the Communist nation, with Apple declaring it is doing all it can to clamp down on any content that the Chinese government wants to prohibit.

Apple and Their Problems with China 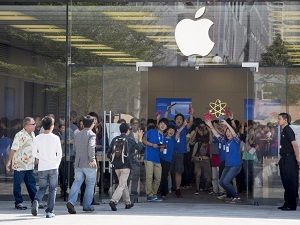 In addition, Apple as well as other technology companies are openly critical of China’s censorship policy, which is very severe by Western standards. As opposed to Western countries, China’s citizens are not allowed to surf the internet without (for the most part) censorship, but that is not the case in China, where political dissent is forbidden, as is random searches of “taboo” items on the Internet.

China has claimed that Apple is not filtering content the state expects to be banned –such as political content, pornography, gambling and gaming media, counterfeit products and other applications that may be games or considered gambling. The problems are in the iMessage and Apple store apps as well as Chinese online stores. China is asking Apple to include features that filter out what they call “spam,” which the authorities say are pornography and gambling messages or applications.

In addition, the government has said that the Apple App Store has been actively distributing gambling apps that are disguised as legal lottery apps by the company, although the country has banned online lottery sales since 2015.

Apple has voluntarily removed apps from its store that the Chinese government has said are illegal. In addition, Apple has allowed China to report apps it feels are in violation of anti-gambling laws in the country, and there have been reports in the media claiming that Apple has removed thousands of games from their App Store. While some of the apps were illegal gambling apps, other games in the app store were not being played for money, but instead for points, which have no value. Apple has come under criticism for its role in deleting applications on the request of the Chinese government but, in reality, the company has very little choice.

If Apple faces a clampdown from the Chinese government, it will lose up to 1/5 of its revenue, including an increasing percentage of revenues from applications in its App Store. In addition, the company uses facilities in China to manufacture its phones, because the labor is much cheaper there than in the United States. If the company and the nation cannot come to an agreement, the Chinese government could disrupt Apple’s supplies from China, as well as their manufacturing and shipping facilities to the United States and other Western countries.