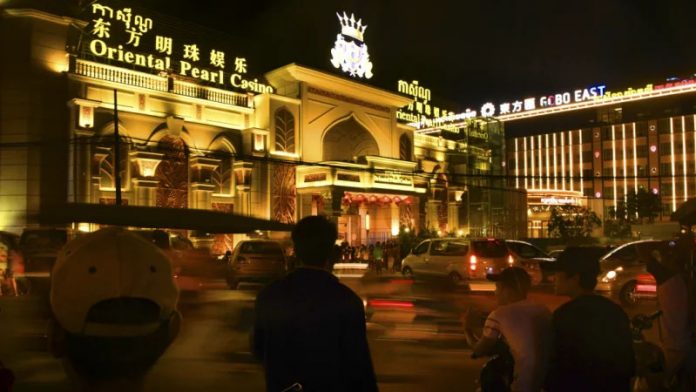 For the Wild East casino cowboys of Sihanoukville: your days are numbered; there’s a new sheriff in town. China’s ongoing crackdown on foreign casinos which target Chinese gamblers finds Cambodia firmly in the crosshairs. This week, Jiangxi police busted an illegal online gambling ring in Sihanoukville, Cambodia, in cooperation with Cambodian authorities.

Anything Goes in Sihanoukville

After Cambodia legalized gambling by issuing 163 casino licenses all at once, the floodgates opened for a massive Chinese casino market in Sihanoukville. Once a sleepy backpacker haven, the town was transformed almost overnight into a bustling gambling den targeting Chinese gambling 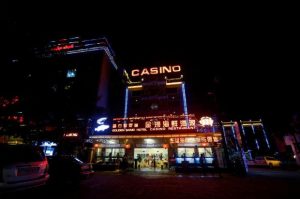 And with the unchecked casino development came a crime wave which rivaled the early days of 1930s gangster Las Vegas. Without proper casino regulation and oversight, Sihanoukville was overrun with organized crime led by Chinese triad gangs. Soon, Chinese punters who couldn’t pay their losses were found gagged, beaten, and sometimes dead. Kidnap for ransom schemes followed, with people being thrown from moving vehicles in broad daylight.

The lingua franca of Sihanoukville quickly became Mandarin, and any actions by the local Cambodian police were suddenly lost in translation.

As gambling in mainland China is illegal, many Chinese nationals have flocked to offshore gambling meccas like Macau and Cambodia. While crazy rich Asians favor the high roller VIP junket tours to Macau, the garden variety gamblers choose Cambodia as a cheap alternative. 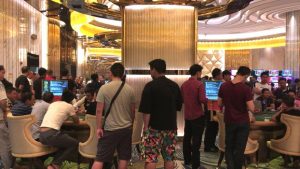 After the rise of Chinese-run casinos in Cambodia, a huge number of Chinese nationals took up residence there. At one point, the Cambodian immigration department estimated that 80,000 Chinese people lived in Sihanoukville, creating a Cambodian Chinatown of sorts. They worked in the casinos and supplied auxiliary services for the burgeoning betting business.

China decided to set up a Chinese consulate in Sihanoukville to deal with the issues of their citizens abroad. China’s concerns over illegal gambling and money laundering soon became overshadowed by the violence and chaos in the casino town.

After Cambodia declared online gambling illegal, they began cooperating with Chinese authorities, who were zealous in their efforts to stop the gambling madness. Recent joint efforts between Cambodian and Chinese police have rescued kidnap victims and shut down unlawful casinos.chi 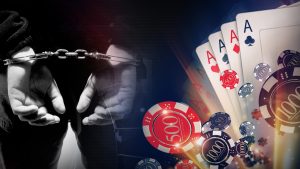 In a large-scale multinational online gambling operation, Chinese and Cambodian authorities busted an online gambling ring in Sihanoukville this week. They claim the illegal online casino handled wagers worth over $4.3 billion and a customer base of more than 1 million gamblers.

The operation allegedly ran a variety of online casino websites with names like Macau Casino and Golden Lisboa, in an attempt to imply a connection with legitimate casino operators. This is a common tactic for cowboy casinos who want to put on airs by stealing upscale casino brand names.

China’s actions against offshore casinos comes as a two-pronged attack. The government is trying to quash the VIP junket tours and shut down gambling operations which target Chinese gamblers. However, their main concern is the billions of dollars taken out of the country – never to return.

China accuses most of the junket tour operators of money laundering, when they take millions in Chinese yuan and exchange it into the local currencies of Macau and Cambodia. Once converted to chips, the money can later be cashed in under a new currency, which is then ‘invested’ or deposited in banks offshore. The ‘cleaned’ money is now laundered, untraceable, and unreported.

This type of risky business is the main draw for Chinese triads and other organized crime groups, which have a great need to launder their own money – and take cuts from gamblers who launder theirs. In fact, several prominent junket tour companies have been shown to have direct ties to organized crime.

When Cambodia cried ‘enough is enough’ and China rushed to the rescue, a mass exodus of Chinese citizens from Cambodia followed. But it remains to be seen how things will shape up in Sihanoukville.