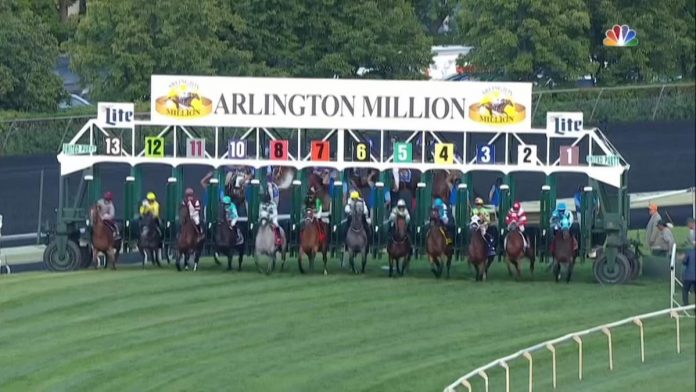 The President of the Illinois Thoroughbred Horseman’s Association (ITHA) has called for the state’s Gaming Control Board to take action against the Churchill Downs racetrack, after the company backed down from the original request to obtain a casino license for the Arlington Racetrack.

When Churchill Downs said they would be looking to pursue a gaming license after the state legislature expanded the gaming laws last year, horsemen who regularly attend the track considered the prospect to be highly auspicious. But, according to sources, Churchill Downs sought a different way to get into the casino market. Instead, they invested in the Rivers Des Plaines casino near O’Hare International Airport; a location approximately 30 minutes away from Arlington.

When Churchill officials were questioned over the sneaky maneuver, they revealed that after Gov. J.B Pritzker signed and passed a bill that would see the state add other classes of games to the track. An increase on taxes was mentioned as well, with the state proposing considerably higher rates than other Chicago-based casinos and gambling halls.

Consequently this proposal caused the company to take a few steps back in August. And in attempt to work on a solution, the Illinois Racing Board last month delayed a vote that would pencil in racing dates for the following calendar year. Churchill Downs is now taking some time to evaluate what they want to do with Arlington, and have agreed to 68 racing dates for the track to commence from 2020 while they ponder all their options.

Churchill Downs said that the prospect of a historical racing operation in its own hometown of Louisville is something they have been hoping and chasing for years.  Members of the IRB aren’t particularly happy with Churchill’s decision to stand down so far, especially as their choices will affect the horsemen who rely on Arlington’s races to bring them a salary.

After questioning the IRB on their view of the situation, Executive Director Domenic DiCera spoke to Casino.org to say that they will be reviewing Churchill Downs “year-by-year” in terms of what will be the best course of action for the industry. 2021 racing dates will not review until the track starts accepting applications from July 31.

“Not until that moment will we know what Arlington or Churchill’s intentions are,” said DiCera.

Although the news of Arlington is seeing a lot of unhappy and worried faces at the moment, this is not the only concern that horsemen of the state are having to deal with. In addition to Churchill’s unexpected change of heart, the governor also told officials of Tinley Park that a site previously up for sale to house a potential racino in the suburbs, has now been taken off the market. The news comes after the buyer who was set to make the purchase was discovered to have links to organized crime rings throughout the state.

He was planning to open and operate a harness track complete with casino, which would have been scheduled to open towards the end of next year. Now, there’s no telling what officials will do with the vacant land.

Both harness and thoroughbred racing currently takes places at Hawthorne Park, but without Arlington’s supplement from casino revenues, any proceeds generated will need to be split between the two.

“In a way, the last two or three months have sort of been a microcosm of horse racing in general,” said David McCaffrey (ITHA), “In that, it’s such a game of ups and downs. Your horse is in a good spot and he gets sick, or your jockey who is the leading jockey at the track is sick today and you have to put up a rookie and he gives the horse a bad ride. Or, you win the race and then there’s an inquiry.”

Breeders who produce mares and foals for the in-state races are going to take a hit after Churchill’s decision. McCaffrey also said that some of the younger horsemen have already moved states hoping for greener pastures in light of the news.

“People made plans,” he said. “People committed to Illinois in certain ways. So those people really have felt that the rug was pulled out from under them.”