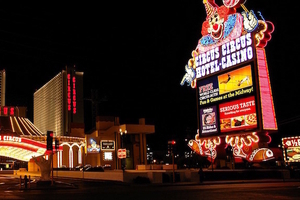 The famed Circus Circus Casino Hotel famed for its spot on the Strip continues to draw a crowd unlike any other in Las Vegas: families with children.

In two months, the circus-themed venue is marking its 50th anniversary in operation, and remains a popular gambling and entertainment destination with its eclectic appeal of carnival based games and slots and poker machines, and a mix of old and new.

Remarkably, nearly two thirds of the rooms booked each year at Circus Circus are for families with children, according to property President Eric Fitzgerald, and the resort’s newest addition, the waterslide playground, as well as old favorites like the Midway arcade, circus show and Adventuredome, remain big attractions for the property.

What’s the secret? Fitzgerald states that Circus Circus offers affordable recreational activities and amenities for visitors looking for a fun weekend in Vegas on a budget, and the establishment continues to hold its own among the updated and remodeled gambling spots nearby.

A diamond in the rough

Arriving at Circus Circus, visitors are greeted with a 123-foot-tall lucky clown sign, a landmark of the establishment, and a building façade that remains unchanged since the 70s. Upon entering, visitors stroll along its worn out carpet littered with old gum stains, zigzagging a casino interior boasting faded colors, outdated TV screens and ticker boards all boxed by, to put it nicely, retro walls.

Despite consistently receiving critical reviews online for its matured interiors, Circus Circus continues to report considerable fiscal results. Fans of the popular destination are comforted by its unchanged, diamond-in-the-rough appeal, and once you look past the less than flattering exterior design, you can expect a plethora of brightly colored slot machines and popular casino games while kids enjoy all of the entertainment of a circus.

Experts estimate that although the historic property is due for a much needed upgrade, renovation costs could run into the hundreds of millions of dollars, which would halt operations and be bad for business. As it stands, the casino is doing more than fine, financially speaking.

“With Circus Circus continuing to crank out money, there is no reason to do anything with it until the North End comes back alive,” said Diana Bennett, co-founder of Paragon Gaming.

The property, which was bought out in 2005 and is now owned by MGM International, continues to defy logic. Amazingly, Between 2015 and 2017, it reported the fastest percentage growth in average daily room rate and cash flow among all of MGM’s Strip resort properties.

Circus Circus offers something that other venues simply cannot, authentic family-themed value, which has become hard to replicate in today’s competitive industry. The fact that the venue has been around as long as it has is a true testament to its earning prowess.

According to Anthony Curtis, publisher of Las Vegas Advisor, “There’s a lot of collective money in that low to middle market economic sector and that will always be the case”… “It continues to be viable because it does what it does very well.”

Circus Circus’ daily room rate remains half of the average rate of what other properties on the Strip charge. The property’s operating profits hover around $70 million, and it continues to see increase.

Circus Circus consists of the casino, three hotel towers, Slots-of-Fun, the Adventuredome, five motel-like blocks, and an RV park. The property features a 3,767-room hotel that rests on roughly 60 acres just north of the Strip.

MGM could have its sights set on expansion as the piece of land has the potential for making more money. Lately, however, the deserted car lots and nearby construction have been turning tourists away, something the company hopes to remedy.

The RV space spans some 10 acres and can hold 170 of these large recreational vehicles; it is a unique feature on the Strip, but remains a valuable financial prospect. Despite, the surmounting cost of owning the land, guests at the lot enjoy the amenity for its low cost and prime location. Renting a spot runs only $35 a night, a cost unheard of this day and age of Vegas’s mega-properties.

After the economic recession in 2007, MGM had plans to get rid of the RV Park in order to turn the property into an updated multibillion-dollar property, but opted for the $9 billion multi-function CityCenter project instead, sitting on some 60 acres just 5-miles south of Circus Circus.

The Circus Circus property did however undergo room upgrades in 2014, and spent $9 million to expand the outdoor pool area.

As it stands, more than $6 billion in capital has been pumped into neighboring north Strip properties for resort and venue development, but MGM remains quiet on any plans for a complete upgrade to Circus Circus and its surroundings acreage.