David Ortiz is one of the most prolific hitters in baseball today. However, a new book attempts to show that he doesn’t deserve to be a Hall of Famer. The book claims he bet on baseball.

Ortiz has vehemently denied the charges levied in the fbook, which focuses on gambling in baseball. If the book’s author can prove Ortiz did indeed bet on baseball, he would most likely face a ban. That includes as a player, commentator or coach. It may also mean permanent banishment from the Baseball Hall of Fame.

Born in the Dominican Republic, Ortiz was a designated hitter for 20 years with the Minnesota Twins and Seattle Mariners. He played primarily with the Boston Red Sox, though. Ortiz, whose nickname is “Big Papi,” won the World Series three times and was a 10-time All-Star. He was also a World Series MVP and had the highest career in the World Series ever at .455. He ranks in the top 25 in home runs, RBIs, and overall batting average. He leads all designated hitters in home runs, RBIs, and hits. He is one of the best clutch hitters of all time and had 13 walk-off home runs. He only retired in 2016 and has three more years to go before he can enter the Hall of Fame if nominated. However, if nominated, it would be an easy vote in 2021. 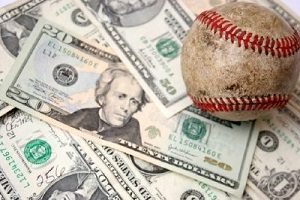 Eddie Dominguez, who had a job in the MLB’s Department of Investigations, was also a Boston police officer. In his book, “Baseball Cop: The Dark Side of America’s National Pastime,” Dominguez said Ortiz has been a gambler for years. He said he regularly bet against the team in 2005. Dominguez said the Red Sox permanently banned a friend of Ortiz’s from the team’s clubhouse after he bet on baseball. Ortiz appeared displeased with friend’s actions, which included his friend regularly betting on the Red Sox. However, he did not ask the team to ban his friend.

Dominguez has no absolute proof Ortiz bet on baseball. But, he has stated this led to a meeting between Ortiz, Red Sox manager Terry Francona, the head of baseball security, and him. After the meeting, the team banned Ortiz’s friend from the dugout. However, Dominguez does say Ortiz’s friend, who bet thousands of dollars on baseball, did not have an independent income.

Dominguez also said police arrested Ortiz’s friend at his home because he repeatedly made false claims about his citizenship.

For his part, Ortiz strongly denies Dominguez’s claims. He stated that Major League Baseball warns the players about the dangers of gambling during their careers. Major League Baseball has been conducting classes and seminars about the problems with betting on baseball. The players hear the cautionary tale of Pete Rose, who was a fixture in the MLB from 1963 to 1989.

Rose was a shoe-in to be a Hall of Famer. He led the league in hits, games played, at-bats, singles, and outs. However, he admitted he bet on his own team while he both played for and managed the Cincinnati Reds. The MLB banned Rose for life. As a result, the Baseball Hall of Fame has refused to induct him into its hallowed halls.

Many people in the Boston Red Sox organization have stated they believe the future Hall of Famer. However, others have said Ortiz’s relationship with an old friend who may be gambling on baseball raises some eyebrows. It is unknown whether Dominguez will obtain absolute proof that Ortiz bet on baseball when he played for the Red Sox.