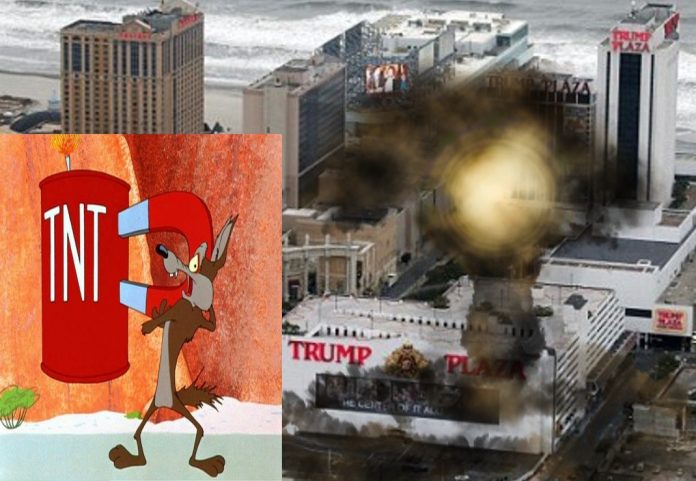 After Carl Icahn canceled the auction to blow up Trump Plaza, Atlantic City set a new demolition date for February 17. And a new auction is underway.

Donald Trump’s rise to riches began as the slumlord son of a billionaire in New York. He then began investing other people’s money in casinos, and the Trump Entertainment Resorts (TER) company was born.

In 1984, Trump opened the casino resort named Trump Plaza on the Atlantic City Boardwalk. It closed in 2014 and slowly fell into disrepair since then. Billionaire investor Carl Icahn bought the empty husk in 2016 and sat on it while waiting for the right offer from developers.

But nobody would bid on the Trump dump, so it has been slowly moldering away since. Chunks of its façade fall on the streets below, and the empty shell serves as a visual reminder of Atlantic City’s economic struggle.

AC Mayor Marty Small implored Icahn to implode the dilapidated Trump Plaza, but Icahn balked at the high cost of demolition. He had already lost money on his acquisition of TER and didn’t want to cough up the millions necessary to blow up the building.

Mayor Small devised a great way to blow up the boardwalk eyesore and benefit charity at the same time. He started an auction for the rights to press the boom button and bring that tower down. Proceeds from the charity auction would benefit the Boys & Girls Club of Atlantic City.

Just before the final bids were in, Carl Icahn sent the city a cease-and-desist letter, effectively blocking the auction. He cited public safety issues, even after he let chunks of the building fall off onto the sidewalks for years.

Now Trump Plaza has a new date with destruction: February 17. The auction house handling the previous auction will proceed with a non-implosion auction. Bodnar’s is auctioning off 10 accommodation packages at Hard Rock and Ocean Casino.

The winning bidders will be wined and dined and will also receive two tickets to the implosion viewing party with the mayor. They just won’t get to press the button.

Initial demolition began late last year, with removal of everything but the shell of the building. And when someone finally presses the boom button in February, the last casino bearing Trump’s name will come crumbling down.