People who gamble with credit cards in New Zealand may have to find another way to pay for it. The gambling regulatory agency in New Zealand is discussing whether to ban credit cards for gambling online. Some people have called the timing of the news interesting. A local casino operation, SKYCITY, is preparing to make a big splash in the online gambling world.

What Kind of Gambling is Available in New Zealand? 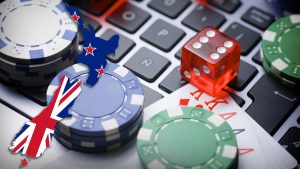 New Zealand is a latecomer to human existence. It was one of the last set of islands settled by humans. The Maori came to the islands in the 14th century. New Zealand was also one of the last countries Europeans explored. New Zealand did not become a British colony until after other former colonies gained their independence.

New Zealand was one of the last countries to try its hand at legalized gambling. Until the 1960s, the only gambling the country allowed was horse racing. If you wanted to gamble in New Zealand, you had to go to the racetrack to do it. The country established lottery gambling in 1987 and online lottery tickets in 2008.
Video poker machines, called pokies, have been the most successful casino-type game. Pokies have been the focus of many attempts at curbing the gambling habits of New Zealanders. All pokies must have a display telling the player how long he or she has been playing. The display must also tell the player how much he or she has spent. Casinos began operating in the country in 1994. There are six in the country.

Why the Possible Changes?

Some people have criticized SKYCITY’s announcement that it was moving forward with online gambling. There were several concerns raised about the casino company having an online platform. Legislators were concerned a familiar casino brand would have name recognition for online gamblers. These gamblers may play longer or more frequently because they are familiar with the name. There are also concerns problem gamblers will want to gamble more because they can gamble from their homes. And, because the gambler will be alone, there won’t be any stigma. Also, there’s currently no self-exclusion policy for online gamblers. This means there may be addicts who are gambling online.

Government officials want to consider a ban as a way to ensure New Zealanders don’t spend too much money. They also don’t want individuals to gamble if they have an addiction to gambling. The government also doesn’t want citizens to gamble on unlicensed websites. The New Zealand government is considering a ban that is similar to one passed by the U.K. government. Recently, the U.K. Gambling Commission decided it will hold hearings about banning gambling online with credit cards.
The country is already in discussions to block offshore or illegal gambling sites from the Internet. Many Kiwis wanted to gamble on sites the government does not sanction. The gambling commission wants to make sure than any sites not approved by the government aren’t gaining customers. SKYCITY is circumventing the ban because it has its headquarters in Malta. Many New Zealanders are upset because they feel the licenses should be going to native casinos. It remains unclear whether the government will ban credit card sales for online gambling venues.