After years of false starts, construction on a new high-speed train between Southern California and Las Vegas will start in spring. The railway will cut the commute time from 5 hours by car to only 85 minutes by train.

The $8 billion rail project will be run by the Brightline West company, which said that construction is set to begin this spring. The line will connect Victor Valley, CA to Las Vegas via high-speed trains running at a top speed of 200 mph (320 km/h) along the I-15 corridor.

Victor Valley is 85 miles east of Los Angeles, and connections between Victor Valley and the greater LA area will be served by the Metrolink network.

The high-speed rail project has been delayed for decades, mainly due to the high cost of construction in heavy urban areas in Southern California. Victor Valley is located at the edge of the desert between LA and LV, and from there the train will operate nonstop.

The proposed rail line will run along the median strip between the two sides of Interstate 15 and will not be permitted to stop at stations between Victor Valley and Las Vegas.

Since Las Vegas is located in a remote desert region, it has been dependent on air travel to shuttle in the tourists. But figures show that nearly a fifth of Vegas visitors came from Southern California.

During the pandemic, air travel has all but trickled to a halt. Which is the perfect time to start working on a transportation alternative.

Other than air travel, LA travelers would have to barrel through the desert for 4 or 5 hours to get to Las Vegas. Until now. The express train journey from Victor Valley to Vegas will take less than 90 minutes. 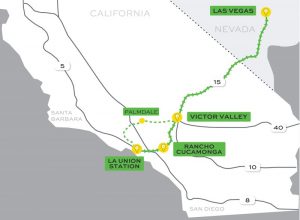 Previous plans for a desert rail route go back decades, and the delays have been due to the high cost. The current project began in 2005 as DesertXpress, which didn’t pass initial construction hurdles and investor deadlines.

Now, the bullet train will be known as Brightline West, and construction is slated to begin in spring 2021. The first trains will roll out on the rails in early 2024.

Once the train is up and running, Victor Valley visitors can visit the California Route 66 Museum in Victorville, an exhibition dedicated to the legendary cross-country road between Chicago and Los Angeles.