Governor Ron DeSantis recently defended his decision to take a flight to New York on a private jet that was not owned by the state of Florida. The jet belongs to gambling mogul and major Republican donor; however, the governor stated that taking the flight was legal, ethical and “by the book.” DeSantis also said that the plane saved Florida taxpayers money.

Gov. DeSantis also pointed out that taking the private jet was more efficient and faster than taking what he described as “Squirt Force One.” The aircraft was a prop plane that Florida purchased as surplus federal property to fly the governor around the state.

More on the Jet Ride

DeSantis flew on the private jet on February 28. The aircraft belongs to Jeffrey Soffer, a billionaire based in South Florida who owns the Fontainebleau resort in Miami Beach and the Big Easy Casino in Hallandale Beach. Soffer accompanied DeSantis on his trip to New York.

Soffer has been in favor of adding slot machines at the Fontainebleau; however, DeSantis will likely have to approve the slot machine additions. An organization regulates Soffer’s casino and hotel that DeSantis controls – the Department of Business and Professional Regulation.

The trip was initially reported by the South Florida Sun-Sentinel and was paid for by the Republican Party of Florida. The funding was a legal agreement that has long been used by Florida governors to avoid state code of ethics violations. The state code of ethics prohibits elected officials (like DeSantis) from receiving anything of value from anyone who lobbies the state.

DeSantis stated: “It was paid for; it was done in accordance with the law. It is not me getting anything. There was no favor done. It was done through proper legal channels.” 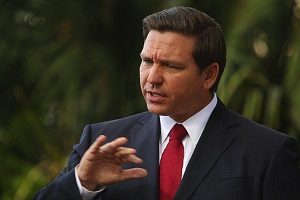 During the Florida governor’s time in New York, DeSantis introduced himself to financial service industry professionals on Wall Street. DeSantis also participated in political events that he did not disclose, according to the governor’s office. The governor reiterated after a Cabinet meeting at the state Capitol: “It’s all legal, ethical, no issues there. We were able to get up to New York, first thing in the morning, did a whole bunch of great meetings and then end up back that same night.”

Former governor Rick Scott, who was in office right before DeSantis, was a former hospital executive. Scott made good on a campaign promise and got rid of two state aircraft shortly after taking office in 2011. Scott was able to dispose of the plane because he had one of his own.

DeSantis only has one state-owned aircraft available for his use. The aircraft is a twin-engine propjet that the Florida Department of Law Enforcement bought from the US government in 2016. The plane has been used primarily for police work. DeSantis stated, “That’s not going to get to New York. You would need like two refueling. It’s actually been repaired a lot lately, as well.”

The skepticism DeSantis has received is not the first time a government official has viewed negatively for working closely with a gambling mogul. Established casino and casino resort owners have been known to donate large sums to campaigns for Republican candidates, as was made evident by President Trump’s association with Sheldon Adelson, the CEO of Las Vegas Sands. Many feel as though accepting gifts or favors of any kind by gambling magnates creates a conflict of interest.