People know Florida for its sunny beaches, theme parks, and family fun. It is also known for something else — gambling in Internet cafes. The state does have gambling in seven Native American casinos. Floridians can also gamble on horse racing and the lottery. In addition, charities can have bingo as a way to raise money.

Florida does not allow online gambling or sportsbooks. However, Internet gambling has become so pervasive in some areas that police have said they feel they’re playing “whack-a-mole.” They close one Internet cafe down, only to have another pop up in a different location.

The Design of Internet Cafes 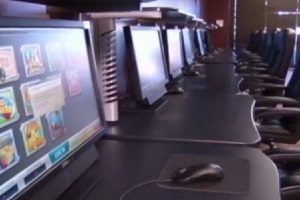 There are wireless networks available all over the United States. Therefore, Internet cafes aren’t as prevalent as they used to be. Restaurants and coffee shops offer free wireless as an incentive to get people to come in and eat or drink. Some areas, however, still have an abundance of Internet cafes.

The first Internet cafes appeared in Asia in the late 1980s. They quickly spread all over the world. An Internet cafe charges its customers to use the Internet. Usually, the cafe will charge on either a per-hour basis or a flat fee basis. The cafes often have food and drink available for customers to buy as well. In the United States, Western Europe, and Australia, as well as many parts of Asia, the cafes are losing customers. This is because many people either have access to wireless at home, at work or on their cell phones. However, Internet cafes are still increasing in popularity in the developing world. Many people in Third World countries do not have wireless networks available to them.

The Internet Cafes in Florida

In the 1990s, you could find Internet cafes all over Florida because Internet access wasn’t available to everyone. However, the public gradually lost interest in them.

Internet cafes have been a problem in several areas of the state. Volusia County has had a lot of problems with the businesses. That’s because of where it is. It’s a coastal county to the northeast of Orlando. Volusia County encompasses the Daytona Beach area, so it sees a lot of visitors year-round. During the summer months, however, tourists are plentiful. There are also many visitors in February when NASCAR fans watch the Daytona 500.

Recently, the Volusia County Sheriff’s Office closed two Internet cafes and arrested both managers. The two most recent closures represented something different from Internet cafes. Both businesses, which were in Ormand Beach, had Internet access and computers along with slot machines. There was also a fish table gambling machine, which is popular with Asian clientele. The authorities also seized nearly $9,000 cash from one café on the day of the raid.

Last year, the Volusia County Sheriff’s Office closed down 15 Internet cafes. Police officers have said that in addition to illegal gambling, the cafes are associated with other crimes and violence. There have been robberies at Internet cafes. In one case, gunmen held up the cafe itself. People in their parking lots have also been robbed. In addition, Internet cafes have been the scene of drug-related arrests. Police have said that while they remain vigilant, they need more help to keep the cafes closed.